Welcome to the a:n Treeline blog  – An a:n bursary international visit by members of the Black Hole Club at Vivid Projects and Salt road artists as part of the Treeline project, an ecology biomimicry & global environmental change artist and Science program, With Black Hole Club artists Rebecca Mahay, Daniel Hopkins, David Checkley, Kate Spence, Jaime Jackson Coral Manton, Leon Trimble and Salt road artist curator Sally Payen. The bursary has enabled artists to develop the ideas that inform their practice in an international context, and for Salt road to develop an international network to develop and deliver a future program of works in Europe. 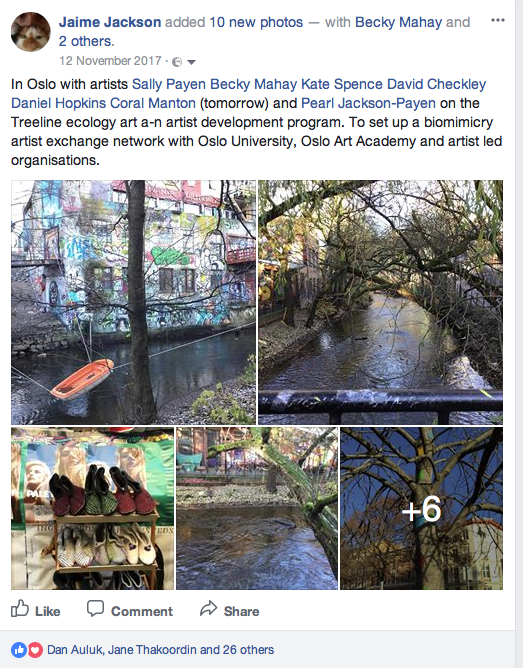 The tree line, like lake boundaries, appears well-defined from a distance, but upon sufficiently close inspection it is a gradual transition. Trees grow shorter towards the inhospitable climate until they simply stop growing’. 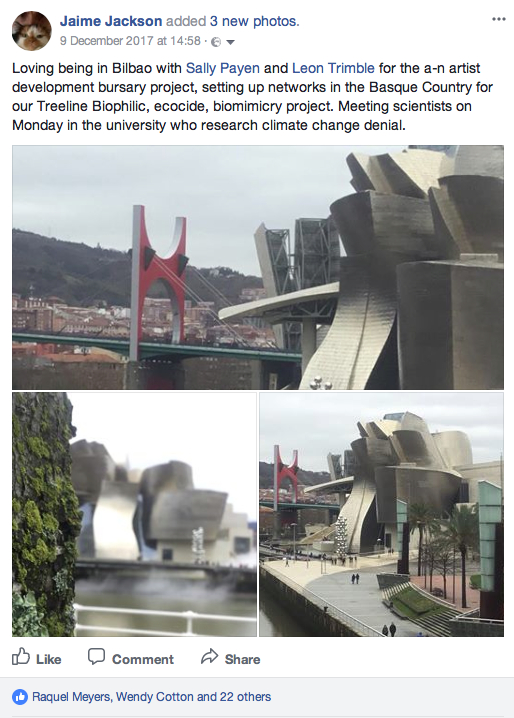 The program links the international Biophilic City, a European Green Capital and Euro City programmes. Treeline will be delivered in partnership with project hub organisations in cities in the Basque Country, Oslo, England and Wales including:
New Art West Midlands in Birmingham and the Midlands
i-DAT in Plymouth
D10 in Wales
PNEK In Oslo (Production Network for Electronic Art, Norway). 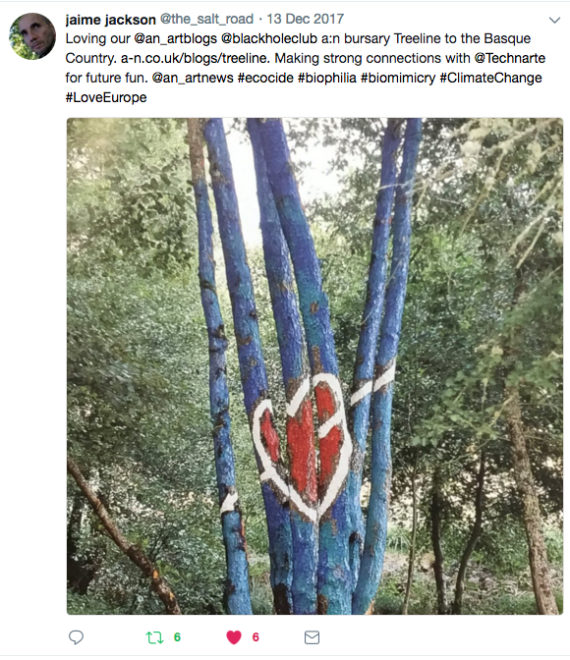 This is a socially engaged project between artists, scientists and communities, allowing artists to work with communities to articulate a bridge between knowledge and belief, and reconnect people to their own human nature. About how we adapt to the climate changing to the idea to really feel it, to collaborate, an academic and co-production perspectives to make connections between heart and head. And how scientists are affected by working with artists. From a sociological and anthropology position to see how contextual and cultural values of a community shape its environmental behaviour in view of climate action. Developing more effective communication strategies in order to engage society. 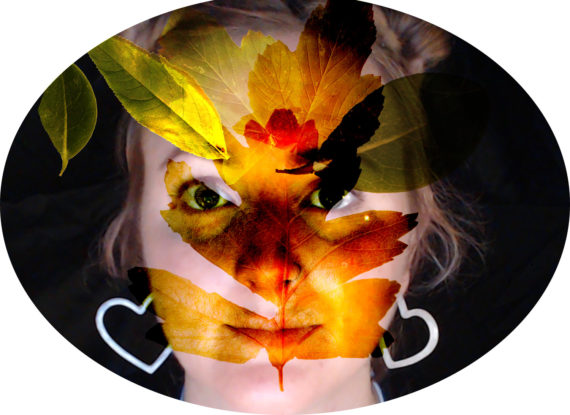 The Treeline is an Arts Council England funded visual art commission program linking artists with academics, asking if artists can create a real state change in culture, a re-visioning of social value structures. If art is at the heart of our understanding of social values, can artists working with ecological aesthetics bridge the gap between knowledge and belief. Can artists and the art that they make re-vision the world’s value structure towards nature, the environment and the planet’s resources, to create a real state of emergency, to work with scientists to create a real state change in culture.

I’ve worked as an artist in the world of climate change for 15 years and have been part of many discussions… In moments of despair, it feels like art can’t begin to touch what needs to be done.  At other times, it feels like the creative world can open out the conversation and facts in a way that transcends science and also doesn’t alienate or intimidate the casual or lay audience. Michèle Noach, Norwegian Environmental activist & artist based in London, working as a writer on Treeline.

What is the link between the patriarchy and ecocide? 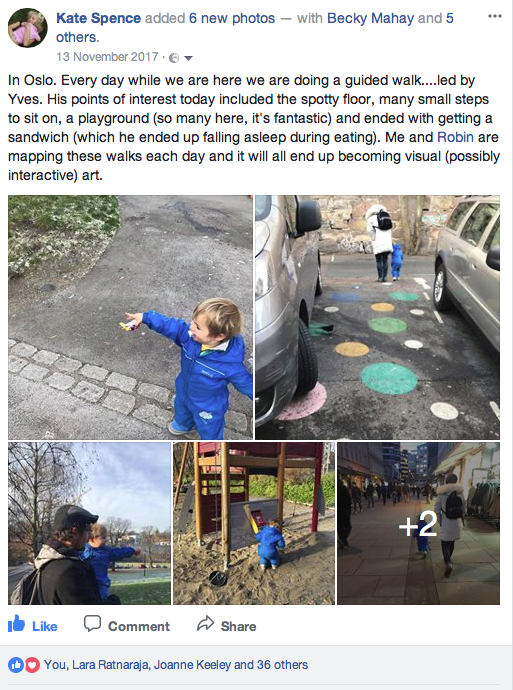 This division between nature and culture is a central component of modern aesthetics. The concept of disinterest that announces itself during the 18th century….signifies exactly this kind of categorical division between culture and civilisation, governed by our desires and interests, and the natural realm that is conceived as a counterpoint, as something outside our human concerns. There is something deeply problematic about this categorical division.’ Fredriksson, A. ‘Environmental Aesthetics Beyond the Dialectics of Interest and Disinterest.

’Why? Fredriksson writes, ‘our understanding of nature…makes us forget the whole story of our natural life-form.’ This forgetting enables an overview whereby other humans as well as natural forms are treated as external, or as environment, enabling their categorisation as, for example, resource. Could natural scenes be a prompt for alternative perspectives or ditching the model of perspective itself which separates the viewer’s eye from the scene observed? Or would that elinate the distancing, which, in modern aesthetics, is the location of criticality.’

Malcolm Miles. Eco-Aesthetics- Art, Literature and Architecture in a period of Climate Change.

Notes on Bilbao and surrounding area.
It is warmer but rains a lot in Bilbao than Vitoria, where it is icy and snowy… and transport links from the airport really easy and cheap.
Meet someone from Technarte – http://www.technarte.org – we met in the Bilboa fine art museum cafe https://www.museobilbao.com/in/ He said that the region was still more old fashioned than other places but that this museum was now over shadowed by the Guggenheim…. He seemed pleased to meet us and hear about the project – also my Greenham anti-nuclear project.

A area in Bilbao called San Francisco https://en.wikipedia.org/wiki/San_Francisco_(Bilbao) is the more seedy place being improved with a few hipster bars – we had tasty food in one – a mix of customers – old locals and young trendies etc – this is where studios, artist organisations, galleries rub with some prostitutes and edgy, bit rough. Lots of graffiti and mutli cultural etc. Met someone from https://www.consonni.org in this area who do actions and publications – not traditional gallery at all – this woman was very intelligent and deep thinking -really enjoyed this meeting. Apparently the saturday after we left was open studios so thats a shame as only one a year. Someone did say that this area is being done up but it still had the characterful mix – I don’t know if it will change and the communities forced out.

We met a group of climate change researchers at the local uni – outside the city on a bus ride http://www.bc3research.org they had big problems with the gap between there research and bringing in strategies for the general population to make change… they thought artist engagement may bridge the gap but they wanted a deep bridge not superficial. I liked these people very much. The researchers here and Oslo like the idea of seminars etc and exchange.

For me walking around Bilbao was particularly lovely – especially the central river and hills all around – its breath taking actually and never that crowded. The old town which is the medieval quater was good – maybe its getting more done up – there are nice health food shops – but we need that as veggie types. The old town doesn’t have the edge of san Francisco area. I would want to stay in Old town next time – it does feel a little like Barcelona with the high buildings and narrow streets but the whole area seems a bit French also. Apparently Sans Sebastian in very French – nearer the border and richer with holiday types. On our last day it wasn’t raining – it rains a lot – not sure if its all year round – but late afternoon in the old quater was filled with locals just as you would want. Very spanish and all ages, not gentrified into something other.

There are some high rise buildings and lots of business etc and of course the Guggenheim is a massive presence, but it wasn’t that busy even on a Sunday. Overall for me the city didn’t feel like a Brighton which I now find over done up and totally yuppie and locals priced out… I used to love the faded glamour of Brighton and crazy mix. I feel Bilbao still has plenty of original charm, lots of different areas and layers to peel… I could do a residency here, I liked it a lot… there are a few commercial galleries to look at – the best one was closed. 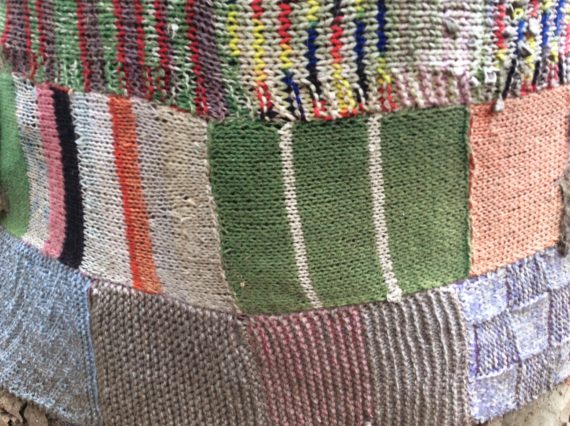 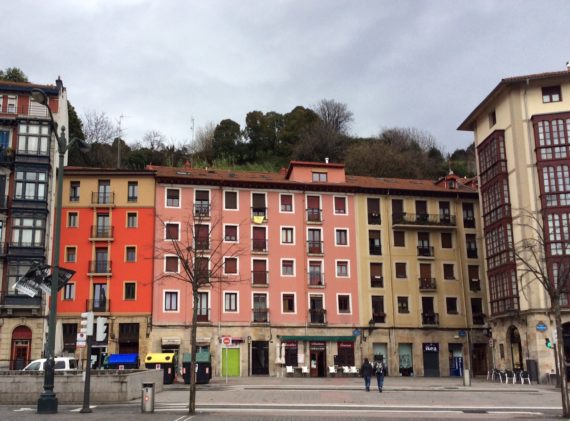 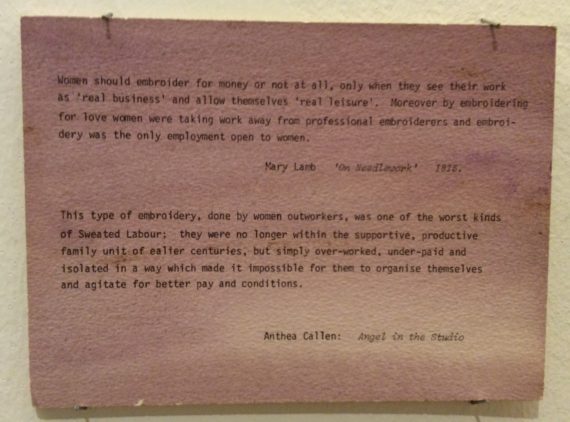 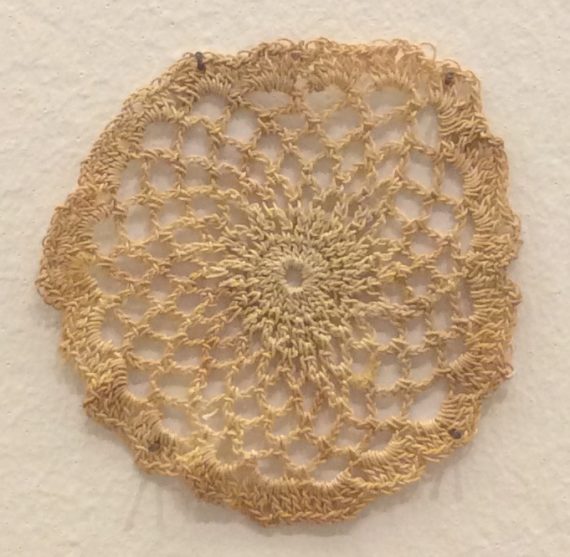 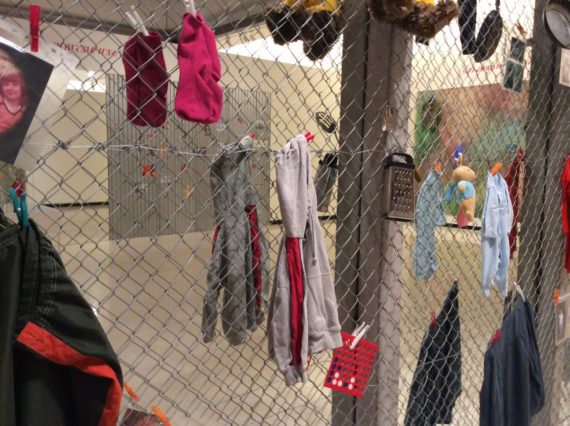 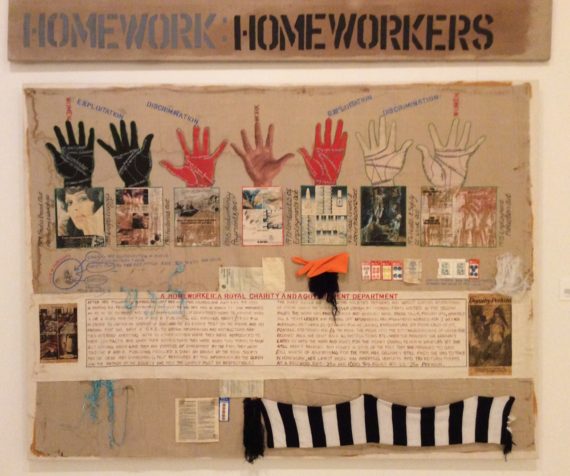 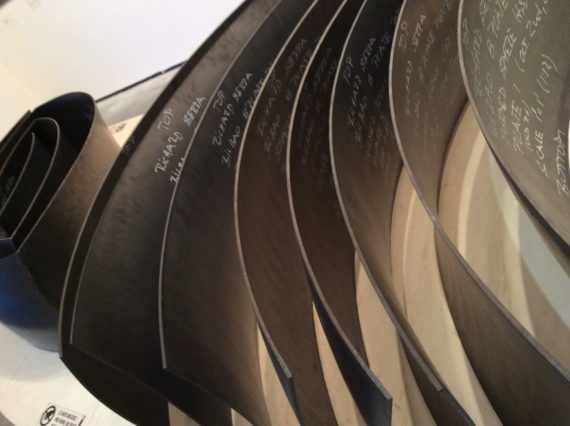 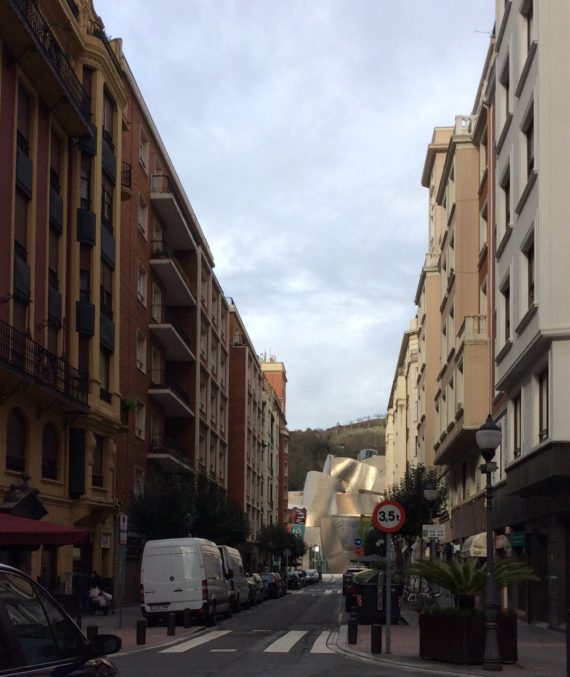 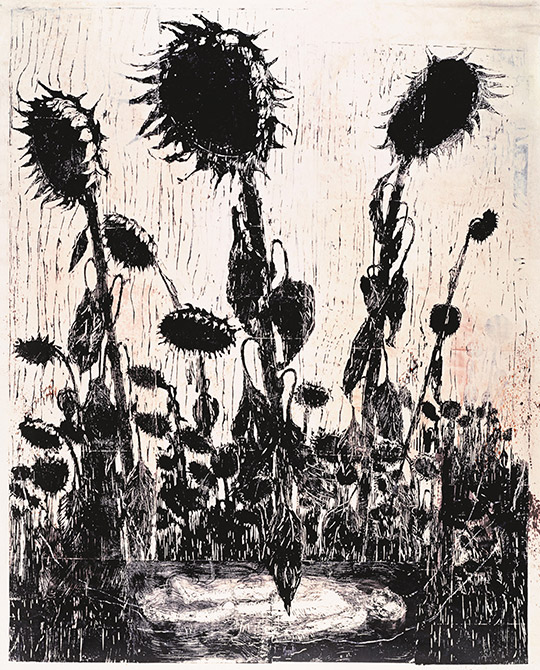 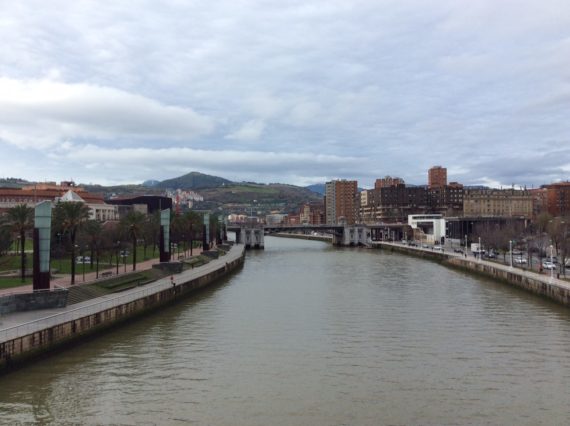 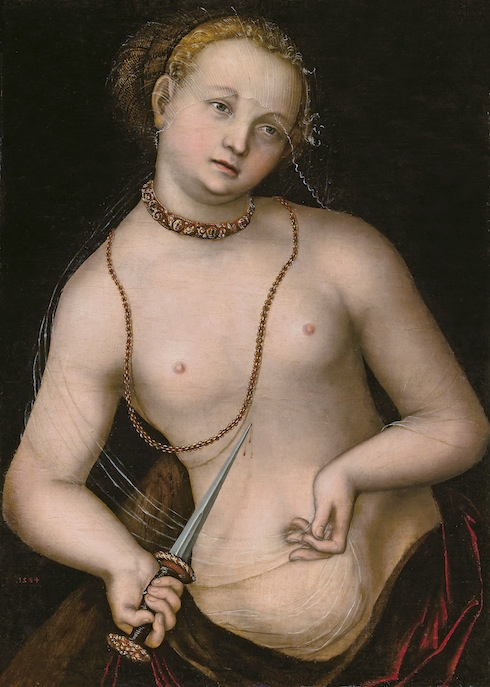 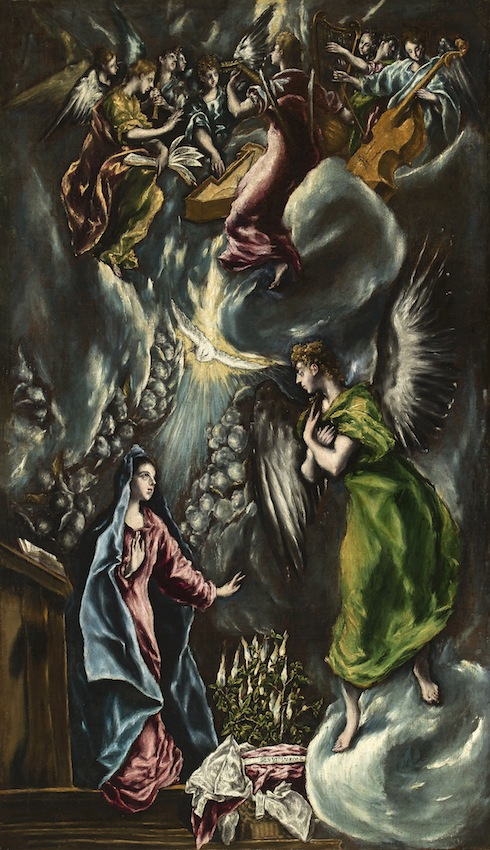 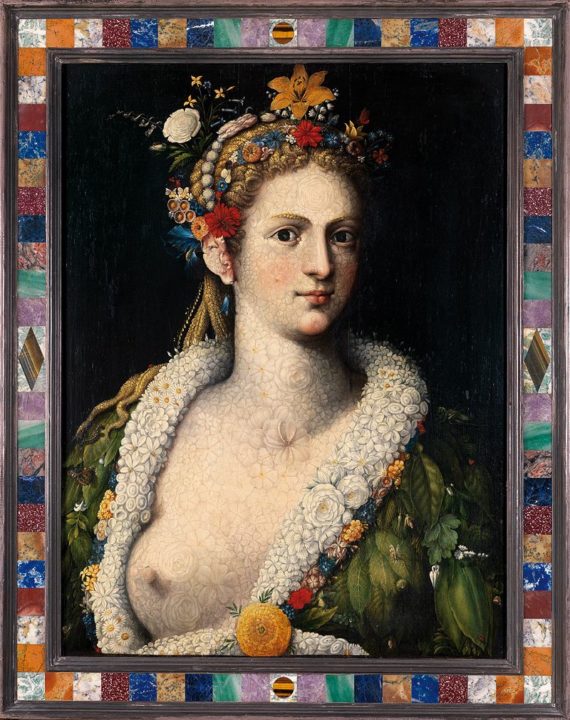 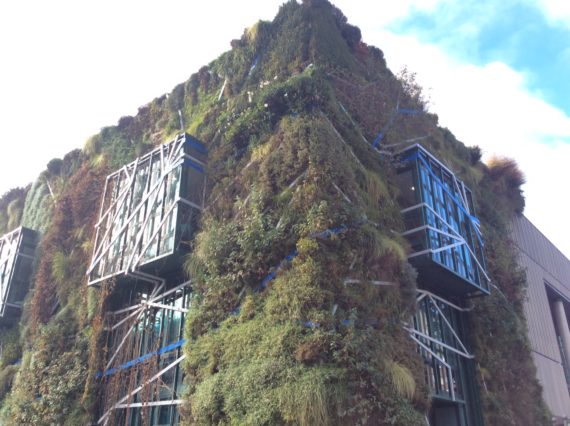 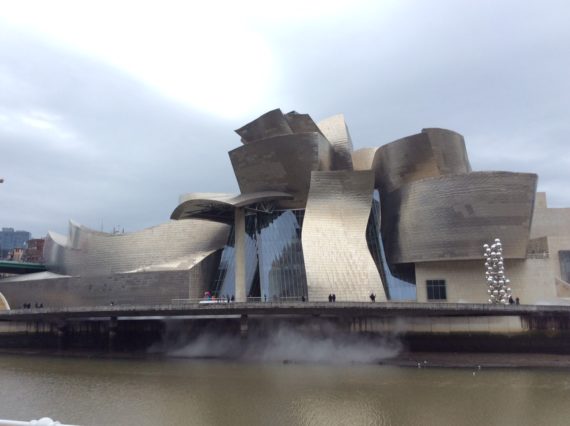 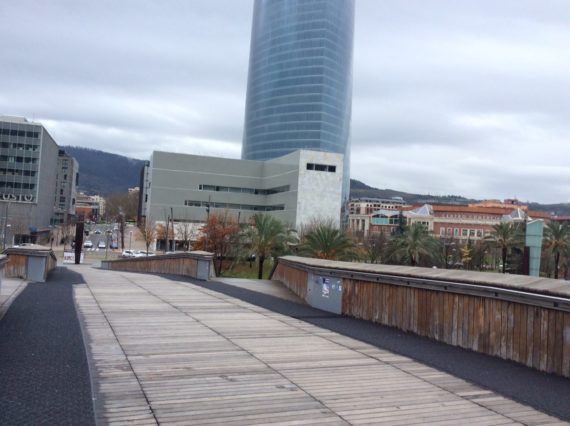 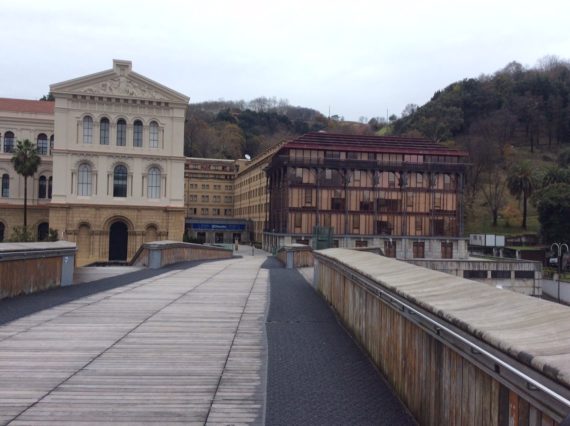 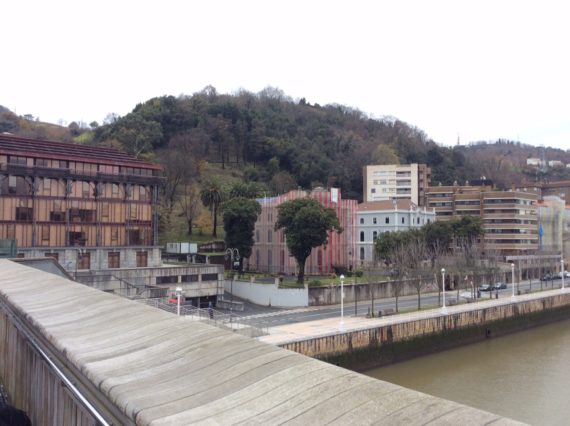 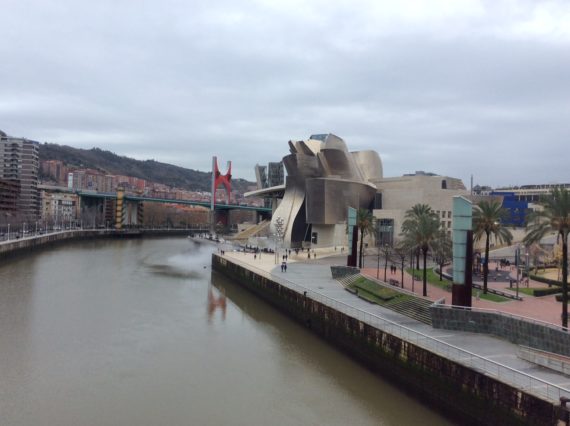 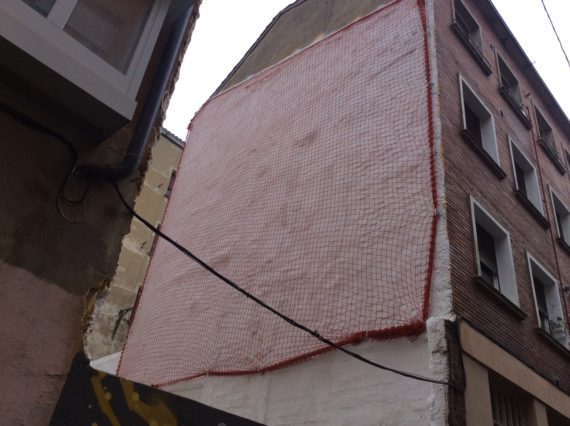 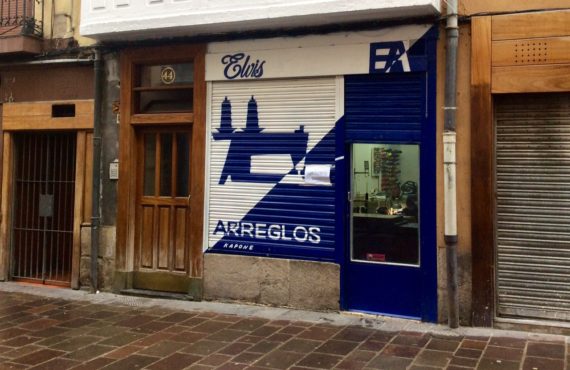