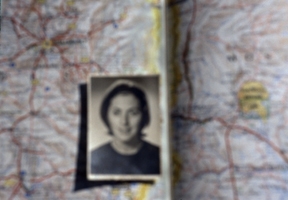 The 2007/8 MA Photography group are in the final throes of our 15 month course. Eight students will present work in two shows at the Northern Gallery for Contemporary Art in Sunderland in November/December 2008/January 2009.

"Give up belonging, that was the only way to free yourself" – Achmat Dangor, Bitter Fruit

Claire Rousell's work intertwines our collective histories and private memories. In creating images, she combines diverse sources, ranging from official documents such as maps to personal artefacts such as historical photographs from family albums, whilst linking them with hand-made objects which draw the two together. Rousell's work examines how identity and place are related; and how migration and travel between places contributes to our sense of belonging or lack of belonging. Her most recent work queries how we can imaginatively recreate or recapture the past, and our own pasts, through the use of images. Maps, of places in the UK and Rhodesia, provide the 'ground' against which black and white portraits act as the 'figure', to adapt terms from painting. The maps are of locations which the sitters knew: specifically as Rousell notes, "the women sit at the centre of the network of roads and train lines around the town they lived in". The women are carriers of historical narratives, and one map marks out a clear historical breach. It is from the late 1970s, just prior to the beginning of the new nation of Zimbabwe. The effect is encountering the works is akin to being immersed in one of JG Sebald's novels, in which the past is forever set at a distance but where the imperative to 'regain' it is never lost, and indeed is a fundamental part of our mental apparatus. Indeed Rousell's framework is best seen as novelistic: as encompassing diverse characters, settings, and potential narratives, interwoven across generations, the relationships between which are left for us to imaginatively piece together. Two further elements transform the images into three-dimensional objects. Artefacts, like needles, are embedded into the paper, marking out – conceivably – the labour of the figure represented. Moreover, each image is surrounded by embossed paper, which bears the imprint of decorative patterning. This patterning refers to the style in which South African domestic ceilings were once furnished, between the 1890s and 1920s. These patterns, intended to echo European plasterwork of the time and connote high status, were originally constructed from the local material of tin. They embody the idea that our identities are fundamentally relational, hybrid and multiple in nature.

Kim von Kothen’s self-reflexive practice is based upon observing, condensing and synthesising her impressions of her environment into poetic form. Her project “Conversations in between strangers” began by undertaking close observations of the conversational ‘dance’ between herself and various others, charting the dynamics of conservations, making notes on how each game of interaction ebbs and flows. Her work is, then, neither an extended self-portrait, nor strictly speaking a series of portraits of others, but a meditation upon a given situation and the factors which impinge upon it. Her images are not to be read as transparent pictorial windows, opening onto a third imaginary space which we can inhabit unproblematically. The works create their own poetic universe based upon, but distinct from the photographer’s own. This is a manner familiar from the working method of many novelists, and her oeuvre is to be viewed almost as a modernist work of art: as a constellation of artefacts whose justification is their own presence, not that of being subservient, second-hand representations of life outside the picture frame.Von Kothen describes her subjects as “passengers with their own autobiographic load, with their partly given, and partly self-constructed self-presentation”. Through her work, we are made aware of the artifice of self-presentation, and of the language of the photographic image. Indeed the project is, at root, a “narrative about photography” whose aims is to “further debate rather than to depict reality”. To achieve this, her triptychs for example encompass three distinct viewpoints upon a given individual. Firstly: a close-up portrait; second, a study of the room the photographer habitually encountered them in; third, a still-life, or detail of that room in tight focus. Encountering these, we are akin to detectives at a crime scene, piecing evidence together to create a narrative, rather than witnesses of an event. Equally, we achieve this by assessing the evidence of dwelling and analysing how individuals command space, rather than passively accepting a work as an objective description of an individual. We are forced to become aware of the artifice of presenting portraits as though they were transparent or naturalistic documents of others’ lives. Rather, Von Kothen’s project is to explore the fabric of a relationship, and to allow us to enter into the texture of that relationship, rather than to observe another individual as a static object or from a third-person perspective.

Richard Glynn presents two projects. The first is a study of one of the most intensively industrialised sectors of the economy, and one which every citizen is dependent upon, but which only roughly 3% of the UK workforce are employed in. The basis of modern agribusiness has been radically revised in the space of a generation, and over the same timeframe the number of consumers able to have any understanding of how their food has been produced has been similarly transformed. Yet alternative methods of production and distribution have been pioneered, and secured a small, but viable foothold in the marketplace. Glynn’s study alights upon a particular farm within the latter category. It is an organic dairy farm run upon humane principles. Unusually, the business controls the entire vertical chain of production and distribution, rather than being dictated to by supermarkets, and yet is owned and managed by a single entrepreneurial team. How, Glynn asks, to picture and symbolize a process, rather than the product, whose appears by definition is the same as those of competitors? How also to represent that this is an alternative model? One answer has been to document the entire process of production and distribution: the owner has his own bottling plant for milk and his own delivery system and sales service. In what might be described as the post-industrial model under scrutiny here, the principle might be empathy – for both the consumer and each animal involved in the production process. I use the word each as Glynn describes his studies of cows as “portraits”. Though each animal is tagged and numbered, each image captures their individual characteristics, in close-up focus, and is presented at a large scale to convey their dignity and grandeur. Rather than viewing animals as units of production alone, we are entranced by the lustrous textures of skin and fur, and of the sense of an individual consciousness. This model farm, Glynn proposes, is a microcosm of how we might yet be able to collectively function as a society: as with all steps towards the good life, it better enables us to see the difference between cost and value.

The second project is in its infancy. The central tower of the Bowes Museum in Barnard Castle was designed as a ballroom but never completed. Now it is being transformed into specialised storage and a library. How will the observed calm of these forgotten spaces change as they are returned to the bustle of a working museum?

Jennifer Kirk's preoccupation is with the everyday artefacts that order and control our lives without us scarcely being aware of it. Her project is to picture the promise of technology, and to make plain how we are all reliant upon thousands of digital technologies whilst scarcely registering the fact, let alone being aware of how they function or are produced. As she remarks, "from the digital alarm clock we switch off first thing in the morning to the last kettle of water boiled at night, we are reliant on microchip technologies without having any understanding of how they are created or how they function." Despite their ubiquity in our houses and offices, Kirk's subject matter is rendered unfamiliar. That her images are akin to landscape photographs, and feel like places rather than objects, is of signal importance. Her use of long-exposure macro-photography illuminates the microscopic landscape of the printed circuit board and the LED. The super-saturated colours of Kirk's prints reflect their long exposures, where digital cameras have been overwhelmed by information on settings they were never designed for. The effect is to create coloured mandalas or haloes echoing her view that "technology has become the new religion" – a conceptual space in which we can invest our identities, and a kind of belief system in which our insensate faith is placed. Using macro-lens to alter our sense of scale fundamentally makes strange these miniaturised, machine-made spaces. Kirk pictures what she calls the "technology landscape" from "the inside", from within the computer, the clock, the kettle maybe – for we cannot tell – itself. We become like Gulliver, a Lilliputian figure confronted with towering gargantuan objects. This process forces us to look at each individual component, its texture, form and function, as well as place within the whole, rather than at an entire printed circuit board or LED as a finished, manufactured object. Like Gulliver, in Kirk's work, we find everything "alien or foreign" as she describes, even when we know things should seem familiar. As she also notes, she has not chosen to examine the more esoteric, or high-end artefacts of the technological landscape: quite the contrary. Her purpose, in photographing standard consumer items, is precisely to resignify the most "universally recognised symbol of microchip technology" – the printed circuit board. In doing this, she asks how technology provides symbolic functions in our culture, and what symbolic functions it has taken over from other areas of thought.

Toby Lloyd works in the tradition of conceptual photography established in the late 1960s and early 1970s by such figures as Keith Arnatt and John Stezaker. Lloyd has remarked that Arnatt’s series of self-portraits, titled as the ‘Impossible Document’, have provided a particular inspiration. In this series, the earlier artist documented his performances of improbable, absurd or self-referential tasks recorded sequentially by the camera. Whilst drawing on Arnatt’s example, Lloyd’s work has its feet firmly in the twenty-first century. Lloyd has described his project as “an investigation of the self and my environment through a series of self-portraits… I am interested in how we negotiate the landscape of advertising and corporate branding.” The unstinting celebration of the self, through consumer activity, might certainly be said to be one difference between Arnatt’s generation and those after. One of Lloyd’s most recent works, ‘Narcissus’, bears this out. It documents what might be described as an image of extraordinary ordinariness: a screenshot of the Google homepage. There can be few people who have not seen this image. It is, truly, one of the few pictures which almost every adult and child can claim to be familiar with, and yet has almost no visual interest. Lloyd’s use of the page as a ‘found image’ is intentionally banal to the highest degree. The simplicity of the work belies the fact that it is a palimpsest, a way to open out onto wider social and psychological tendencies. Lloyd’s means of achieving this is through the addition to the page of his own name: minimal means with maximum meaning being his dictum. The work is a taut description of our collective love of new technologies, but it is at another level, an old-fashioned cautionary tale dressed in the newest of clothes. For those of a certain age, the work echoes the Victorian trope taught to children that if one gazes into a mirror long enough, one would see the devil reflected back. Here, in the virtual space, like in the Victorian looking glass, we not only see ourselves, but our deepest fears embodied, and encounter the relentless horrors that are our true selves.