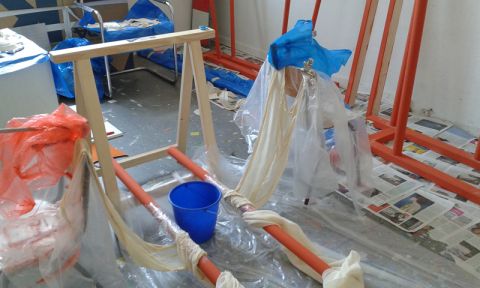 This is a blog about the 2 month residency that I am taking up in Berlin. At Oxford Brookes University, one of the “creative stratagies” that we give to our first year students is to go for a walk. My own practice is formed through walking, walking generates the thought and then in the studio these ideas begin their journey into the light. I am finding light in Berlin.

Well, what sort of blogger is too busy to write their blog. The answer is “this sort of blogger”. Too busy finishing the work for the exhibition, installing it, having a Private View, hanging another exhibition of my drawings, having an opening for that, having visitors, taking the work down and getting it shipped home. Anyway, it all happened offline and hidden from Artists Talking.

I have been back in London for about 3 days and I am trying to come to terms with it all.

What I can say is that it was absolutely wonderful to see my work finally installed in the pavillion and I enjoyed the quiet moments I spent there with my work. I am not sure that I have ever got this much pleasure from my own work before.

I was also very happy with the way my drawings looked displayed in an up market appartment in Charlottenburg. I also sold a large drawing, the proceeds of that sale paid for all the materials used for Der Spiegelsaal. So my initial feeling is that both exhibitions were successful, I certainly got very good feedback about the works.

Just when I thought that it was safe to go back in the studio, the Mirror Hall lives on. I have decided that the work must now be seen in London.

Time is going really quickley and everyday there are small panics and moments of elation as the work takes shape. After a time of confusion and sorting things out in German my fabric hardener arrived this week. I felt quite stressed as I was still not sure how I was going to execute this part of the work, but this morning on entering the studio my Heath Robinson rig up had done its job. I now feel confident that I can pull this damn thing off.

Well I am feeling a lot better now. My wood was successfully delivered last thursday and I have taken over the end third of Carlos Silva’s studio at The Milchhof. So the last week has seen me settling into a routine of studio everyday and regular visits to OBI, the German version of homebase. I have had to buy lots of tools and bits and pieces, it is very frustrating when I know that everything that I need is in my studio in London.

I am so excited to actually be making something though. When the wood arrived and I was able to hold it up against the windows of the Pavillon. I can test the sizes of things against this exhibition space that has been so much in my thoughts over the last year or so.

Tomorrow I have two more elements to add to my structure and it will be complete, then I will start on other elements of the work. I also need to do some promotional work, I picked up the printed invite yesterday. I guess it is all really happening. 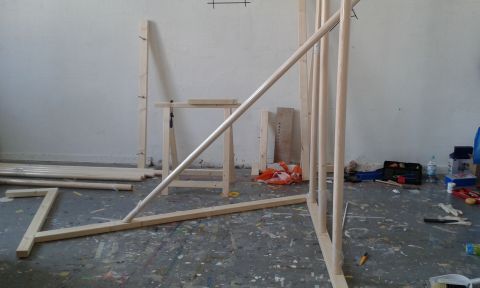 Well here I am in Berlin, in fact I have been here one week already. When I arrived last Tuesday it was really sunny and spring, but the weather disintegrated over the weekend and it is cold and wet now. Not the best weather for running round trying to find the materials I need. I had a very bleak bike ride to Friedrichshain today on a wild goose chase for muslin. In the end I was able to buy it around the corner from where I am staying.

When I was writing this blog in 2012 when I was in the Guest Studio at the Milchhof I am sure that most of what I wrote was about ideas and the exciting things that I was seeing. My experience at the moment is quite different and a bit frustrating. Any of you reading this who have tried to make work in another country, grappling with another language, will understand how I am feeling. It seems I have gone from being a fully functioning Sculptor in London to a sort of helpless creature who is much more dependent on others, here in Berlin I am “like a Baby” (these are the words of the person who’s studio I am sharing, he should know, he said he was “like a baby” when he arrived here from Bogota). Everyone is being really supportive and helpful, but it is hard when things that you would normally sort out just like that take days.

Yesterday I spent about half an hour walking around the equivalent of Homebase trying to pluck up the courage to go to the counter and try to order my wood. I had gone to the store in the end because trying to do this from the catalogue was just too stressful. At least if I could handle the wood and see it in front of me I would be confident I was getting the right thing, rather than relying on some internet translation service, which really couldn’t cope with “timber buying talk” anyway.

Well, it is all being delivered tomorrow, and then another set of problems arrise from not being in my own studio with all my own tools. Several times in the last few days I have thought, what the hell am I putting myself through this for.

Several times in the last few days I have also been really excited about what I am doing here.

There might be a small amendment to the text from last time, somewhere between deciding on the title of the show and writing the press release I managed to corrupt the German spelling of The Mirror Hall, in two different ways. But the official invite has all the correct spellings on it. 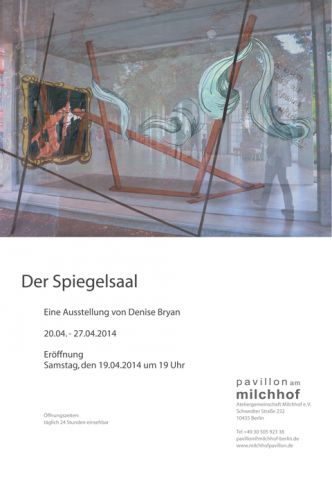 Just over a week until I go out to Berlin again. I have been head down in the studio finalising ideas and researching Rococo detailing all over the place. I even spent an afternoon in Tate Britain drawing the picture frames. I can’t even look at a TV programme these days without noticing the architrave around a door in the background.

I have my place to stay, a studio share for 5 weeks and the opening date for my show set.

19th April, Easter Saturday. The run of the show is shorter than I anticipated, just over a week, until 27th April. I also have a shorter set up time, so I have to plan really carefully.

Here is the press release for the show:

Denise Bryan is a British Artist based in London, she has created this work especially for the Pavillon am Milchhof, the installation is the result of research undertaken by the artist during a two month residency in the Gastatellier during the summer of 2012.

Bryan works across media, making objects, photographic series, installations and performance pieces. Her work has been described as “Hands on Conceptualism”. Bryan’s sculptures are often based on materials collected whilst travelling, these materials have a conceptual value that underpins each piece. Her installations and performances act as a narrative of personal experience and in a broader sense the pieces interrogate our relationship to the exotic.

Bryan came to Berlin in the summer of 2012 armed with vague notions of the sublime and how this vast, flat city can make the individual seem very small. During her stay at the guest studio in Milchhof she concentrated on making drawings based on her explorations of the city, these drawings reflected the stark diagonals created by its main arteries. This exploration of the drawn line represented a departure from the artist’s normal methodology, researching ideas in gesture rather than through objects. At the same time Bryan was exploring the 18th century palaces of Berlin and Potsdam, looking for evidence of the sublime and the exotic within their invented landscapes, in gardens and in interior Rococo detailing. These Rococo curlicues seemed to echo the artist’s own ramblings in and around the city.

This installation is an attempt to realise these drawings in three dimensional form and to bring together visual cyphers that equate to the artist’s experience of the city. In the summer of 2012, walking past the Pavillon every day, Bryan became interested how the building mirrors itself; also the way in which the glass is reflective, bringing the outside world inside; the new work also explores this phenomenon, creating new spatial dynamics. The Spiegelshaal was an important room in many 18th century palaces, mirrors denoted opulence, but also played with our sense of perception and illusion, this work seek to encapsulate this idea within the Pavillion.

All I have to do now is make the work. 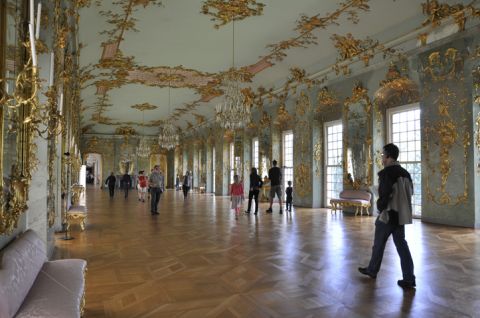 I am a visual artist, having studied sculpture at the Royal College of Art, I now make mixed media installation and performance pieces.Â  My recent Â work has been made in collaboration with Adrian Wilkins who is a sound artist.Â  Projects we have undertaken jointly include the 15 Month long Silkthreads Project (a web Project) which took us along the Silk Road. and exhibitons at The Oriental Museum in Durham, Babylon, Ely and installations at Macclesfield Silk Museum and inÂ the Victoria Baths Manchester.Â In addition I teach Contemporary Practice to undergraduates at several institutions.Â