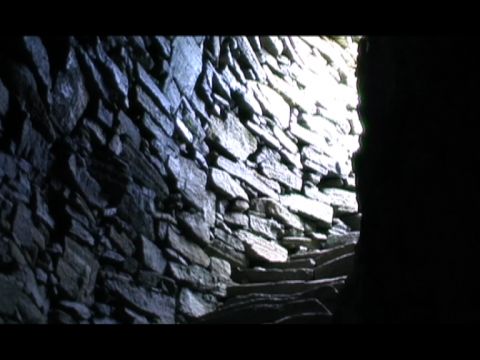 The project discussed is a joint collaboration between two artists, Neil Galligan a watercolour painter, and Kim Walker, a digital artist. Both artists travelled together for three weeks around the Western Isles, collecting material in 2009.

When The Stone Falls The World Will End was exhibited at Limousine Bull (Aberdeen) in 2009.

When the Stone Falls the World Will End

The exhibition came and went and all together it was a fantastic learning experience for both Neil and myself.

I exhibited a six screen video installation so had to narrow down my body of work. I showcased one film from each of the Hebridean islands alongside two others. The sound track filled the gallery space from each TV monitors so was free to mix up as it progressed.

Neil displayed seven large scale charcoal drawings, again he wanted to highlight at least one from each island.

We had excellent support from the gallery curators Matt and Debby and their team of volunteers. It was especially good to have them ready to give us their advice as they have more experience with developing exhibitions that younger artists like ourselves. They are familiar with the gallery space and with the positioning of the work within it.

It was encouraging to have support to try out new ways of showing work and this helps you to build confidance and self-belief for any future work you may peruse. We both can't thank them enough.

The show was a bit of an experiment for Neil and myself. Alongside the development of other work about the Hebrides, the 24 photographs have become the first body of photographic work that either of us has produced.

Neil works for a Glasgow-based picture framer so for this show, he waxed and cut older frames he had made for his under-graduate degree show. This meant that we had low framing costs and were happy that we could do a bit of recycling!

The images displayed are a broad selection of many ancient historical sites, landscapes and interesting objects we found throughout our travels around the islands. Neil's pictures tend to be landscape studies whereas the images that I captured are close up and textural studies of particular objects. On the islands, we were surrounded always by the sea, it was constantly nearby. Many of the images do have a nautical theme so we were keen to try to incorporate this through our exhibition display.

For the hang of the show, the library have strict guidelines that exhibitors need adhere to. We had to use picture rods and at first struggled to line up the photographs as some picture hooks did not stay in position. We then tried to position the pictures in a wave formation so that we didn't have to worry about them all being straight. This worked well and at this point we were almost out of time! Last touches, a clean of the glass, and we were finished!

Brings back the degree show stress a bit!

Just quick update. Both Neil and myself have been working on further film loops and drawings. I have had to re-consider some audio for a couple of my film loops and have been trying to do this through the Audacity sound editing program. It's going OK although I do find this program quite tricky and not very user friendly.

I've completed another new loop and re-edited one as I felt that one was missing a scene and seemed too short.

Neil has completed the largest drawing yet for the exhibitions, a cairn on the edge of a cliff in pencil and black conte.

We have both been developing and framing our photography. This had been a great experience as I normally have photography as documentation of my video work for myself and have never really framed any up before. These images will possibly be included in one of our 09 exhibitions or be a separate body of work to be exhibited individually. We'll see…

I have been back in Glasgow from the Outer Hebrides for 3 months now and the work is making progress. It can be quite slow though as I'm balancing part-time work and my art practice, usually I have around 2-3 days per week to work on my projects.

I am developing a multi-screen video installation which will be exhibited in two venues, one in Inverness and the other in Aberdeen. The exhibitions are with another artist, Neil Galligan, a watercolour painter. The two shows will be the first for each artist, showcasing new work produced after graduating in 2006.

I focused on filming the ancient monuments such as the standing stones around the Islands, the ruined broch at Carloway and other natural sights. The sound has ended up being mainly water recordings as it was so windy when we visited, that I found it difficult to record outdoors.

Both Neil and I focused on capturing images that we felt were unique to the area, hopefully collecting material that is not like picture postcards and not too traditional.

One idea is to have the monitors displayed in the same shape that the Islands are on the map, curving East from the South to North. Each Screen will have a looped film with audio through headphones. Neil's paintings and drawings will be around the video installation, so video projection is not possible for at least one of the shows as it would affect the display of his work.