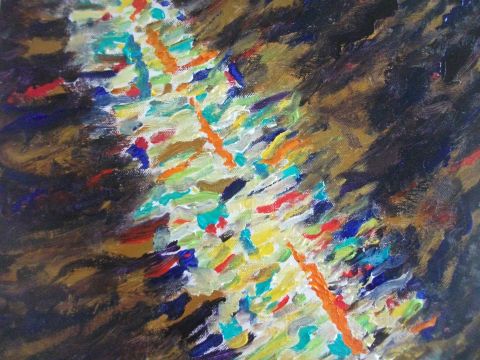 I have been looking at the concept of ‘frames’ recently. Not in the way that photographs or artworks are framed but rather more in the way that attention is drawn to a specific image or part of an image. Just as spectacles focus the viewpoint of the wearer on what they see through the lens (in addition to them being aware of the wider perspective), I have been exploring the use of frames as a way of capturing several aspects in one piece of work but simultaneously focusing the viewer’s attention on the core theme.

Throughout this exploration, I have been struck by the fluidity of the idea and how it runs far deeper than I had realised initially.

To begin with,  I started by looking at incorporating spectacle frames in my paintings as a way of offering the viewer a focused perspective on my work. However, in time, I realised that rather than ‘offering’ a perspective, I was actually channelling the viewer to exactly what I wanted them to see.

During the course of this period of exploring the wider use of frames, I was reminded of a number of examples of works that sought to achieve a similar objective but were actually sculptures rather than paintings.

For example, on a recent visit to Malta, I photographed the White Shadows, a sculpture by Maltese architect Richard England. In one sense, this seems to be the framed image of a family. However, at the same time the negative space formed by the shadow falling on the ground provides an interesting and dynamic interplay between the sculpture and its shadow. Interestingly, this expands the perspective beyond the actual sculpture itself as the constantly moving shadow adds an extra dimension to the work while still existing within the overall frame. 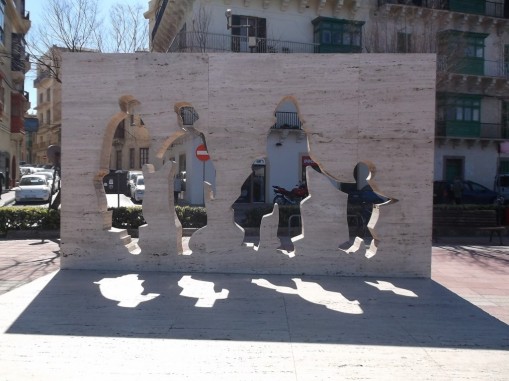 Another image I have included is the iconic Pop Art sculpture, Love, by American artist Robert Indiana. This is actually displayed in several locations throughout the US. I have chosen a photograph I took of the particular installation in JFK Plaza in Philadelphia. In the same vein I have included a similar sculpture bearing the word ‘Love’ by Richard England. The letters are inverted so as to appear reflected in their correct orientation after dark in the water below. I particularly like this interpretation of the ‘Love’ sculpture as it uses the water below as its canvas. This adds yet another dimension as not only is the shadow dynamic but the actual canvas onto which it is projects is also moving constantly.

I have also included some other takes on the use of frames which I photographed on a recent trip to Malta.