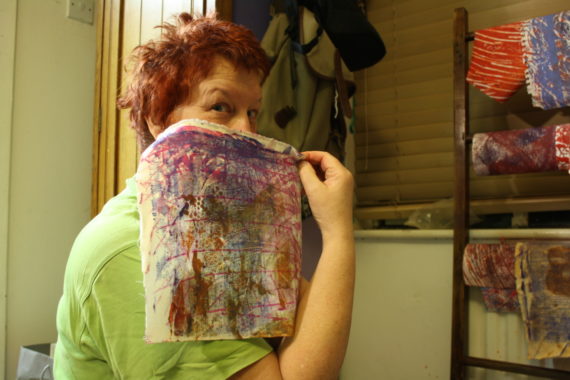 Oooooooooooooooooooo, it’s  getting nearer. The daughter leaving home thing. About 3 weeks to go. Don’t really want to think about the exact time left to  get everything sorted. At the moment I’m having an epic battle of my own, with fleas. They’ve been on steroids and have taken over the girl’s bedroom. This makes me believe that my world is  normal place and once the fleas have gone (everything crossed), she can just go back in there and scatter her stuff all over the floor as usual. But this won’t be the case will it? We’ve been having conversations all year about the garden and what we’ll plant but then saying “Oh but you won’t be here. I’ll send some pictures” Now that time is almost upon us. I had this belief that once she’d gone I would be up in my attic space happily creating and sorting out my artistic practice with a passion and a focus. And I believed this. But now I’m not so sure. I managed to complete a sketchbook that’s been on the go since 2015. We were on holiday and I’d look at this mountain opposite and just respond to whatever was going on with the weather or the sounds.  It was brilliant. And I began to experiment with a textile piece. (Slight pause here to investigate strange flea shaped object on the keyboard) But right here at this moment I can’t imagine what the hell I’m going to do with this work or how I might want to take it forward or actually, I don’t even want to think about arty stuff. I’m obsessing about the fleas because it gives me a focus and a clear purpose to my existence. As with the wasps in Germany, the girl expects the mother to sort her out and make her safe from fleas. But what am I going to do when she’s up in Edinburgh? What if she gets wasp and flea infestations? What if what if what if?????? I don’t know do I? None of us do. Just going to have to wait a bit longer to find out.