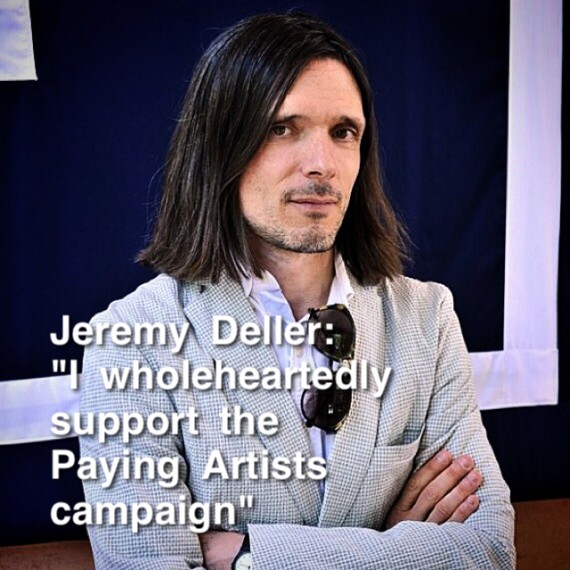 Deller, who represented Britain at the 2013 Venice Biennale, has pledged his support in a statement that draws on his own experience as an artist and stresses the importance of “proper and fair payment” for those exhibiting in publicly-funded galleries.

He said: “Our vibrant visual arts culture is built on diversity and social mobility – on the premise that young people from all walks of life can gain access to art school and go on to become the artists of the future. It is wrong therefore that some publicly-funded galleries expect artists to exhibit work for free, because without paid opportunities, only those with a private income will be able to afford to make art in the future.

Some of my best opportunities as an artist came through commissions from publicly-funded organisations, so I understand the vital importance of proper and fair payment. If we want our culture to accurately reflect the society we live in, then we need to pay our artists. That is why I wholeheartedly support the Paying Artists campaign.”

Yinka Shonibare MBE, who created the famous ‘Nelson’s Ship in a Bottle’ Fourth Plinth commission in 2010 and has exhibited at major museums and galleries across the world, has pledged his support in a statement that stresses that without fair payment the arts is at risk of becoming elitist.

He said: “The Paying Artists Campaign is important for the future of contemporary visual arts. We won’t have great artists making significant work in the years to come if we don’t tackle the problem of low or no pay. I raised this issue publicly when the Arts Council announced plans ten years ago to improve funding levels to contemporary visual arts – I asked how can artists afford to live in places like London if they don’t get paid for their contributions to galleries?

Removing the financial barriers that many artists face will make it possible for artists now and in the future to come from all parts of society, creating art for the public to see that covers the broad spectrum of human experience.”

Speaking in response to Deller’s support, AIR Council’s Joseph Young said: “I first met Jeremy after a talk he gave at Brighton Festival in May, when I approached him to ask for his support for the Paying Artists campaign. What struck me was his eloquence and thoughtfulness as a public speaker (as well as his understated humour).

“Having been a fan of his work since The Battle of Orgreave, I instinctively felt he would be a supporter of fair pay for artists. I am therefore delighted that he has chosen to lend the weight of his reputation to our campaign.”

Read both Deller and Shonibare’s full statements of support here

For more information on the Paying Artists campaign, visit www.payingartists.org.uk