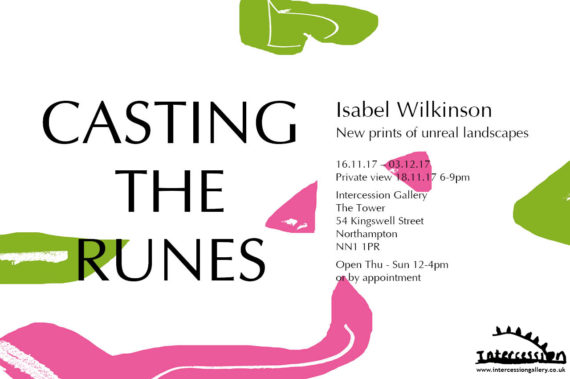 What happens to a landscape when the real place is allowed to coexist with the place that we imagine? If you fragment it, will unreality come? A reimagining of myth where story and underworld break the surface, making their presence known by taking physical form and repeating throughout the landscape of the Thames riverside, turning it into a place outside time.

In a series of new carborundum and monoprints, and silkscreened canvas sculptures, Wilkinson’s first solo exhibition explores the fevered relationship between the fiction consumed by the mind and the corporeal landscape. Taking its title from an MR James horror story, Casting the Runes repeats shapes, colours and images like cosmic signs – signifiers of fictitious murmurings become solid, rising from the muddy banks to take shape as three dimensional objects formed from printed matter.

Russell Hoban’s science fiction novel ‘The Medusa Frequency’ transplanted the singing, fortune-telling head of Orpheus into 1980s London, appearing variously as a cabbage, a football and a grapefruit starter at Le Caprice. Casting the Runes sets the scene for Orpheus’s demise on the banks of the river Helicon, where jetties, shopping trollies, ropes and bike wheels stand in for his fragmented and broken body.

Born in Oxfordshire in 1987, Isabel Wilkinson trained as a printmaker at Camberwell College of Arts. She has won awards for her work from Artichoke Print, Clifford Chance and the Oficina Bartolomeu dos Santos. She lives and works in south London.