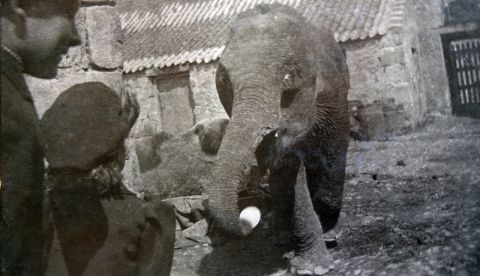 The Ice House, Helmsdale’s monumental deep freeze. Once a store for salmon catch, later a coal fired fish and chip shop. Now the vaulted chamber plays host to the second in a series of three double sited works, marking the end of two years as Timespan’s artist in residence and youth arts curator for Ruth Macdougall. Since August 2007 Ruth has led nearly 300 participants in 8 communities across the county of Sutherland in the OURS youth arts project, facilitating their interaction with over 50 artists from the UK and abroad through trips events, workshops and apprenticeships. Driving forward the next chapter in the life of Helmsdale’s Ice House, illuminating and establishing an environment in a building for which the possibilities are now limitless, is the permanent legacy that she now leaves. ”The circus elephant in the photo is called Bosko, the photograph was taken circa 1900 and he is one of three unlikely creatures that live in Timespan’s photographic archive; a llama, an elephant and a camel. He is approaching the two children at what would appear to be a bit of a trot – elephants cannot run. What happened next? I reckon he slaps the kid and makes a run for it.” ESCAPED CIRCUS ELEPHANT LIVES THE DREAM Ruth Macdougall