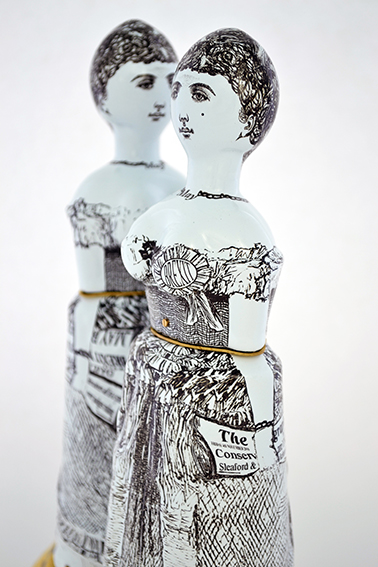 John’s career in making spans some thirty years: his practice is rooted in a fascination for exploring the creative value of processes employed by defunct Midland metal working ‘toy’ trades and a passion for satirical story telling through object making. By appropriating techniques from the printed tin box/toy industry and the enamel trade, and melding it with historic reference points he has made automata and narrative based objects for exhibition and commission, with work held in collections including The National Trust and The Crafts Council.

Enamel | Substrate is the culmination of John’s practice-based PhD investigating the [lost] craftsmanship employed in the 18th South Staffordshire enamel trade. The trade made objects for the person and the home such animal-shaped snuff boxes, Rococo and Neo-Classical styled candlesticks and Medieval armour shaped mustard pots, from paper thin copper foil coated with enamel. John’s past craft practice identified a knowledge gap in literature with regard to the manufacture of the fundamentally important copper substructure of these objects. The copper substrate created the surface upon which the decorative enamel coats were fused, and, ultimately gave objects their form. It was the novelty created by this three-dimensionality combined with the brightly coloured, exquisitely decorated and lustrous enamel that resulted in the objects being regarded as highly desirable by the burgeoning middle classes of the period. Whilst the decoration has long been celebrated (and the focus of much study), the importance and significance of the substrate construction has been disregarded. John’s research identified its importance, and, through contemporary craft making re-valued it both in historical and contemporary making contexts.

More information can be found here