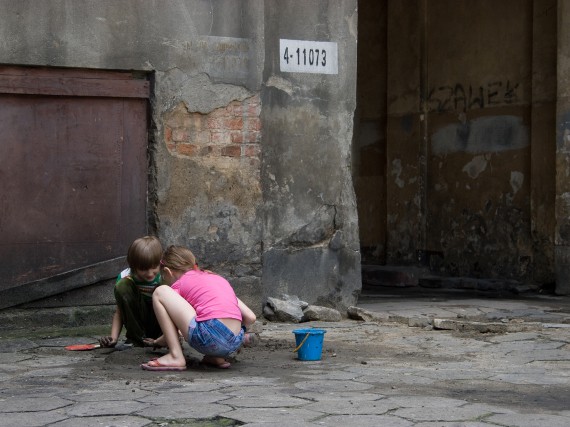 Known for creating film and photography portraying often overlooked subjects in everyday life, Lockhart’s practice is underpinned by a commitment to immersing herself in new environments and building intimate relationships with people and places. Perhaps the most significant of these is her friendship with a young Polish girl Milena, who Lockhart first met whilst creating her film Pódworka (2009), which will be presented in FACT’s Gallery 1. This film explores the courtyards of Łódź, Poland, and the children that inhabit them as their playgrounds. Nine years old at the time, Milena’s character was immediately noticeable to Lockhart who appreciated her energy and strong will.

Since filming Pódworka, Lockhart and Milena have formed a friendship resulting in several projects that span several media. Two separate photographic projects will be presented in the exhibition as well as a text-based work and a new film commissioned by FACT, Liverpool Biennial and Kadist, San Francisco. These comprise Lockhart’s latest collaboration with Milena, who is now fifteen years old and living in an orphanage near Warsaw.

The show is part of the 8th Biennial Exhibition A Needle Walks into a Haystack curated by Mai Abu ElDahab and Anthony Huberman. It will be accompanied by a series of films selected by the artist exploring themes of children’s agency and selfhood.