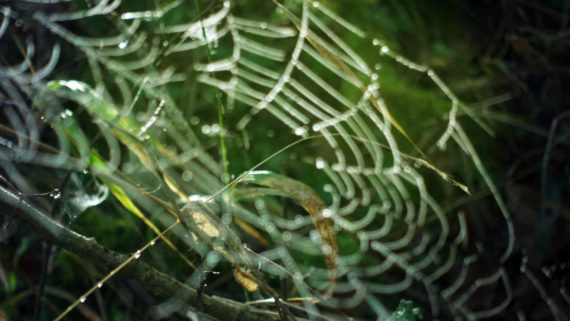 A hybrid form of landscape cinema, which observes a year’s cycle of seasonal changes, centred on an unnamed hollow way in a remote area of rural mid-Devon. The film captures meteorological phenomena and the natural world in the sunken lane over a twelve month period, using experimental filming techniques and field recordings made at the site that capture the sonic architecture of the space.

To create the film, I made regular field trips to the location with the cinematographer and sound recordist Stuart Moore – these visits allowed us to experience the place during a varied range of weather conditions through winter, spring, summer, and autumn, to respond intuitively using our camera and sound equipment, and then to review and reflect on the recordings we had made.

On Location is the initial phase of a practice-based research project that responds to Annabel Nicolson’s artist’s book, Escaping Notice (1977). Nicolson was an important member of the 1970s British film avant-garde, and the unnamed hollow way connects to a track that leads to the isolated farmhouse featured in her book. The film was first exhibited at Plymouth Arts Centre from 10 to 19 January 2017.

The project explores empathy and vision in relation to Virginia Woolf’s writings through the use of experimental film techniques.

The film evolves around a bust of Woolf at Monk’s House, Sussex, that was created by the artist Steven Tomlin in 1931. Under the scrutiny of sittings required by the sculptor Woolf experienced a deterioration of mental health. As a result the sittings were called to a halt and eyes in the sculpted head remain incomplete. The unintended incompleteness of the ‘empty’ eyes acts as an invitation to the observer to fill them with his or her own eyes – to ‘see’ as if from Woolf’s position. Central to a process of film making that might be described as a re-enactment (or re-tracing of) visual influence on Woolf is a search to find a way to connect a modernist historical artefact to a contemporary aspect of mental health.

Like a Signal Falling was developed as a part of an AHRC funded project ‘Modernism, Medicine and the Embodied Mind: Disorders of Self’ and exhibited in July 2016 at Glenside Psychiatric Hospital Museum in Bristol.

Dr Kayla Parker Artist film-maker and Lecturer in Media Arts whose research interests centre around subjectivity and place, embodiment and technological mediation, from feminist perspectives, and explore the interrelationship between the body and forgotten, liminal spaces.

Dr Min Wild A Lecturer in English who researches in the eighteenth century, with special interests in periodicals and print culture, in satire, and in criticism. Her monograph, published by Ashgate in 2008, is a study of The Midwife, Christopher Smart’s irreverent magazine of 1750-1753, in which the poet takes on the persona of a critical and opinionated elderly lady called Mrs Mary Midnight.

Artist film-maker creating innovative, experimental moving image works for cinema, gallery and broadcast television, and a range of commissions. The recipient of many awards, her work is shown worldwide across public, gallery and online spaces.