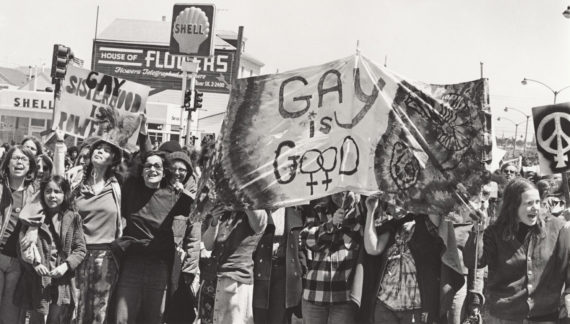 The LGBT community and its most vulnerable members have been harder hit than many by the Covid19 crisis, the lockdowns and social distancing. The pandemic has brought back the trauma of the AIDS crisis, forcing the community to see how vulnerable and marginalized some of us are, and it has promoted discussions about the importance of safe spaces when for some of us ‘Stay at home and stay safe’ is not a viable option and, for some, is even a contradiction.

The exhibition ‘Queering Spaces’ coincides with the Socially Engaged Art Salon (Brighton)‘s recent winning of the LGBTQ Safe Space International Award. The exhibition focuses on significant places and moments for the LGBTQ community in the UK and abroad; from the first Pride in 1973 in Los Angeles, captured by the renowned photographer Cathy Cade, to the squatting and club scene in London and New York’s drag balls in the 80s. It explores the spaces that give support to people living with HIV, and the struggles of LGBT communities in the townships of South Africa and in other countries where homosexuality is still illegal. It also looks at the spaces used for hookups between strangers, from a toilet in a small town in New Zealand to Brighton’s Duke Mound’s Beach. The stories of these places and the people who make them are told through film, photography, installations and socially engaged practices that amplify the voices of those that are often unheard.

‘Queering Spaces’ celebrates LGBTQ+ History Month and is the first of SEAS’ exhibitions in the up-and-coming Brighton LGBTQAI+ venue, The Ledward Centre (TLC). The centre is named after the late editor of Gscene (now Scene), James Ledward. As the centre is being configured in a disused 2000 metre square shop, SEAS has invited, as part of the exhibition, Brighton’s Queer History Now collective to imagine what this space could become.

The Ledward Centre continues the tradition of LGBTQ people taking over spaces which were never designed for this community. The Socially Engaged Art Salon, which was founded in the living room of a private house in 2016, was not dissimilar. “Queer Space”, in fact, does not exist, or if it does,  it “exists only as a counterpoint, a reconfiguring agent” (Jaffer Kolb). The brick that was removed from New York’s pavement in 1969, and thrown at the police in the Stonewall uprising, would be the first to testify to this.

Throwing a stone, holding a sign, marching in the streets, mis-using “public spaces” for “unnatural” acts, squatting, transgressing dress codes and heteronormative behaviour, these are all acts of queering spaces. The ones who have always led these transformations, historically and now, have been indeed the queers, the outcasts, the marginalized… this exhibition in many ways is a tribute to them.