THE SOCIETY OF THE SPECTACLE - a-n The Artists Information Company

Fifteen years ago, who would have imagined that essays might be replaced by 280 characters or a selfie? That we would be valued based on the number of our “followers”? That, on a whim, you could buy fictional “friends”? And that a “like” would be more appreciated than an evening out holding good conversation and sharing a bottle of wine with friends? 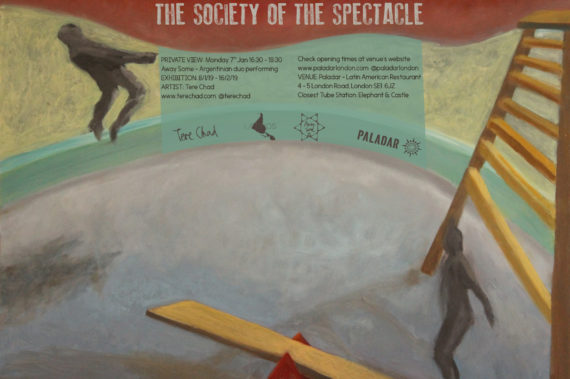 The Situationists of the 1960s were a Paris-based group of radical political thinkers with their roots in the avant-garde artistic tradition. They developed the concept of a frivolous world where representation becomes more and more dissociated from reality to the point where the spectacle becomes more real than reality itself.

Chilean artist, Tere Chad, continues this approach in a naïve and humoristic style at her upcoming exhibition in Paladar, at 4-5 London Road, London SE1 6JZ from Monday 7th January until Saturday 16th February 2019.

Tere Chad is a co-founder of the Latinos Creative Society at the University of the Arts, London. She has held five solo exhibitions and participated in several arts projects worldwide. Recently she has held an exhibition ‘Postgraduate Printmaking in London’ at the Clifford Chance, ‘Neo Norte’ where members from the Latinos Creative Society have also attempted to reframe the south as the new north at ‘Fundación Cultural de Providencia’ in Santiago, Chile; ‘Automation vs. the Human’ at Sala Cable al Arte in ‘Fundación Colunga’ in Santiago, Chile; and ‘Latin American Myth Deconstruction’ at The Crypt Gallery in London.

Through her work she explores the theme of how touch screen technology disconnects us from reality, empowering the society of the spectacle. She invites us to reflect on how we can find balance among both reconnecting with the haptic (tactile) and incorporating new technologies.

For further information about the artist and the exhibition, please check social media accounts @terechad or email [email protected].