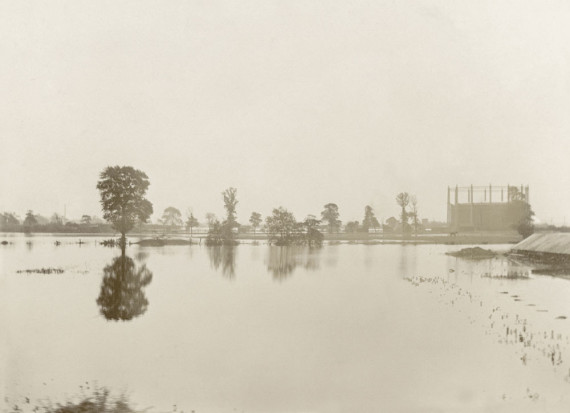 A stunning, idyllic image of local marshland submerged, transformed by floodwater in 1903 is partnered with a 1953 photograph of further flooding showing its impact on civilisation. Industrial buildings have become architectural islands while a makeshift ferry attempts to transport a couple of people out into the open water.

Graphically illustrating changes in technology an amazing shot from 1907, by named photographer Alfred Wire, shows dozens of men excavating a swimming pond by hand. Wearing white shirts, waistcoats and flat caps, methodically filling heavy wooden wheelbarrows they must navigate their loads along undulating gang-planks to unload them. By contrast a 1975 image of a major roadwork project benefits from trucks and heavy machinery.

Between flood and construction comes destruction. The damage wrought by an air raid over Walthamstow in 1918 leaves a landmark pub in tatters, and a residential street devastated by a highly explosive bomb at Christmas 1940, sees homeowners stoically salvaging belongings. 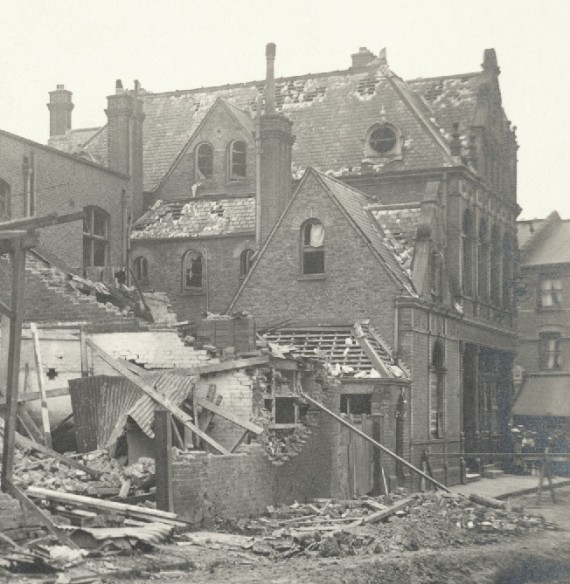 Leaving horror and toil behind, the largest image is an undated, romantic snap of skaters and walkers gingerly enjoying an ephemeral time as Highams Park lake is transformed into a natural ice rink. Framed by soft silhouettes of wintry trees, and in their Sunday best, it’s a joy to see our predecessors at play.

The photographs have been selected from the vast archive of the borough’s Vestry House Museum by WVWG curator Danny Coope.

The exhibition is entirely visible from the street, and is lit after dark until midnight every day, and continues until Sunday 28 February.