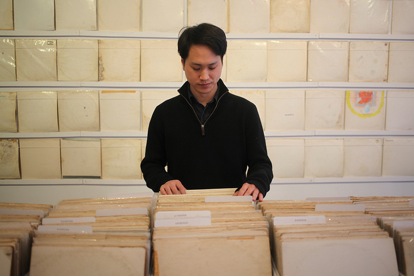 New York based artist Rutherford Chang is relocating to Liverpool for one month this summer to display and expand his collection of over 1,000 first-pressings of The Beatles’ White Album.

The seminal White Album – officially titled The Beatles – was the band’s ninth studio album, with a revolutionary cover designed by pioneering pop artist Richard Hamilton. Famously stark, the totally white design has provided a blank canvas for the coffee stains, doodles, mold and rips that have accumulated on the albums since its release in 1968, making every copy now unique.

Chang’s entire collection of over 1,000 White Albums will be displayed in the format of a record store with two vital differences, only one album is displayed, and records are only bought not sold. Visitors will be invited to browse and listen to copies of their choice.

Also featured is a vinyl album Chang created by layering 100 different copies from his collection, exploring the sonic and visual differences between the aged vinyl discs and covers.

Chang has been building his collection for eight years and says:

“The character of each copy is distinctly shaped by their individual histories, so this collection of intentical yet unique mutiples together forms a story of the past half-Century.

I hope to expand my collection while in Liverpool, so please bring me numbered copies in any condition!”

Chang will be present at FACT and visitors will be able to sell their first edition copy to him for inclusion in the collection. This will be the project’s debut in the UK and will coincide with International Beatleweek (20 – 26 August) when there will be special events programmed in and around FACT including acoustic performances in RopeWalks Square.

The full programme of events will be listed on fact.co.uk/whitealbum when confirmed.