Where We Live - a-n The Artists Information Company 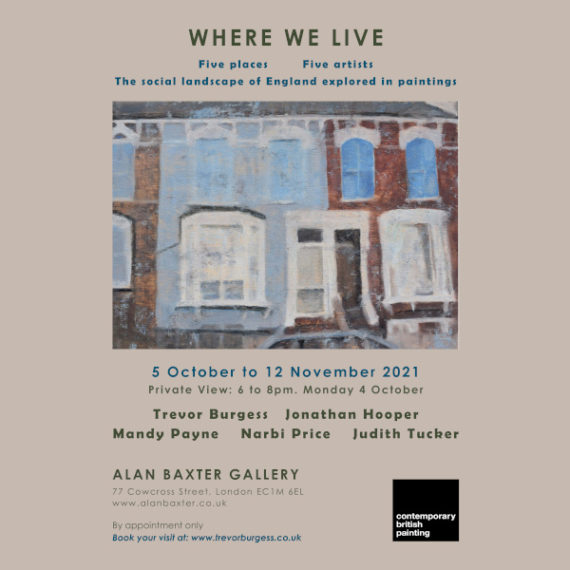 Where We Live is an artist-curated exhibition of paintings that take a deep look at overlooked and under-regarded aspects of the landscape we inhabit in England today. The show presents five locations across England that have been the subject of intense scrutiny through the eyes of the artists. The paintings provide a concentrated and often critical perspective on the social landscape of England at a time of profound political and social change.

The five locations expose tensions and faultlines inherent in topographies of English landscape:
–  the all-but-erased history of post-industrial mining villages in Northumberland
–  a large-scale housing estate in Sheffield in transition to luxury flats
– bringing a modernist colour perspective to bear on depicting residential architecture in Leeds
– contested coastal chalet plotlands in North Lincolnshire, whose history goes back to the early twentieth century, many of whose residents come from Yorkshire mining communities eviscerated after the Miners’ Strike of 1984
– recovering everyday urban experience of the street and the notion of home from the commodification of the London property market.

Each artist raises acute questions of how England’s landscape and architecture is layered over potent legacies of the past, and reveals conflicted visions of the present and the future. In the wake of a pandemic that confined us to our homes, it questions what the idea of home looks and feels like in the midst of multiple displacements and disorientating political, social and environmental change. In doing so, the exhibition foregrounds the voices of the communities who inhabit the depicted locations, speaking through texts, poetry, podcasts, digital and live discourse about Where We Live.

The exhibition aims to demonstrate how the practice of making paintings in series over an extended period allows the artist to examine the multiple facets and topographies of a place.

 Trevor Burgess has made residential housing in London the subject of over 60 paintings that obliquely critique contemporary obsessions with housing as a property market commodity.
 Jonathan Hooper has, for over ten years, intensely and exclusively focused his painting on observation of the urban and suburban environment of Leeds.
 Mandy Payne has devoted nine years to paintings focused on Park Hill, Grade II* listed Sheffield council estate, one of Britain’s largest examples of Brutalist architecture.
 Narbi Price’s series of paintings of Ashington, Northumberland are the product of many hours spent walking the streets of what was once the world’s largest mining village, in the footsteps of the
Ashington Group of Pitmen Painters, recording a changed post-industrial landscape that they would barely recognise.
 Judith Tucker’s ongoing series of paintings Night Fitties, are devoted to the chalets on the Humberston Fitties in Lincolnshire as a locus for exploring how notions of place, identity and Englishness are constructed

Where We Live has been initiated by Trevor Burgess, whose collaborative projects as an artist-curator explore the contemporary practice of painting in a social context.

The London launch at Alan Baxter Gallery will be followed by a national tour opening at the Millennium Gallery, Sheffield Museums on Saturday 15 January 2022.

In partnership with Contemporary British Painting