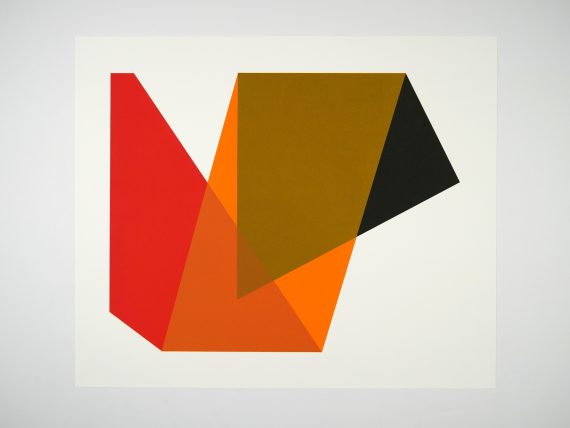 Aleph Contemporary is pleased to present Willard Boepple: “Monoprints”, the American artist best known for his abstract sculpture. Boepple is interested in the constructed world around us in relation to the body, and is concerned with the paradoxical ontology of being sentient, in motion, alive in the world.

This exhibition, curated by Jo Baring, focuses on Boepple’s monoprints. In 2004, he met British master printer Kip Gresham and technically they collaborated to produce highly coloured overlapping and pivoting geometric shapes and forms accentuating surprising depth of colour and transparency.

Though Boepple initially studied painting, influenced by Richard Diebenkorn, a family friend, once he tried his hand at sculpture, he found it to be his medium, inspired by the work of David Smith and Anthony Caro. In the 1980’s he worked closely with Caro at the Triangle, an artists’ workshop in upstate New York. The workshop, which he chaired for ten years, continues to be a thriving project in the US, originally brought together 25 emerging and mid-career artists from the USA, Canada and the UK – hence the name Triangle – to make work informed by new ideas, materials and media, and influenced by each other’s practice and the context of the workshop.

Boepple uses minimalism for its radical departure from traditional imagery through absolute geometry. In a way, his printmaking is a return to painting yet somehow his images retain their three dimensional quality, seeming to hover in space.

Willard Boepple was born in Bennington, VT in 1945. He is represented in New York, London, and New England. His work is included in the public collections of The Metropolitan Museum of Art, New York; The Museum of Fine Arts, Boston; Storm King Art Center, Mountainville; and the Fitzwilliam Museum, Cambridge, UK, among others. He was elected to the National Academy of Design in New York in 2010, where he serves on the board of directors. His work was included in their 2015 invitational exhibition.