Gina Birch (born in Nottingham, lives and works in London) is best known as a founding member of the post-punk band The Raincoats which she founded in 1977 while still taking a degree at Hornsey College of Art. The band set a crucial precedent for feminist work within a DIY punk context and after taking an MA in film direction at the Royal College of Art, Birch also went on to make videos and Super 8 films, often for other bands, and also to play with Red Crayola and the environmental band The Gluts. Birch was a member of the Turps Studio Programme between 2018-20 and now she paints as much as she performs.

What have been the main changes you’ve experienced as an artist over the last 10-20 years?
I came to London from Nottingham in 1976 to go to Hornsey College of Art. I was very soon immersed in what became punk and the world of 1970s politics of squatting, nuclear disarmament, Rock Against Racism and later Rock Against Sexism. The rundown city was our playground, and it was good. It was a time of casual sexism, casual sex and more overt sexism. But it was a time, unlike now, when we thought the future would be better – we could make a difference in all sorts of ways.

Ana da Silva and I formed The Raincoats, an all-female experimental group. We tried to do things our own way, and take power into our own hands with the artwork, the posters and the tours. Soon we became known as a group who embraced feminism. It was sometimes quite isolating, as some of the other female groups found our approach of not brushing our hair, wearing strange clothes – things with holes in, inside out things – somehow horrible or threatening to their femininity. The boys, however, like Swell Maps, Scritti Politti, Gang of Four and PiL, realised that what we were doing was exciting. Later, of course, we found out that we had been an inspiration to many young women and groups that were more under the radar. 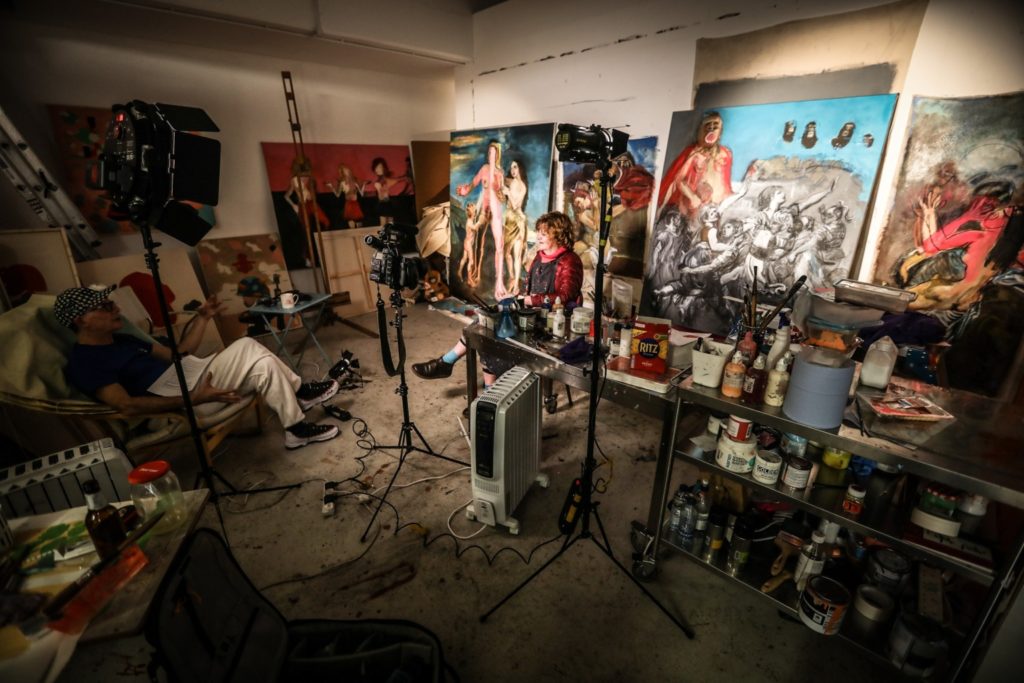 I was very interested in Super 8 film after Derek Jarman came to our college with his work. The Raincoats took off and so did my Super 8 filmmaking. At the same time The Raincoats made three studio albums and released one live concert album. Eventually things diverged between us and I went to Dusseldorf, Cologne and New York with the band Red Crayola.

On my return, I worked at Rough Trade for a brief time, met my future husband, and formed a kind of pop duo called Dorothy with Vicky Aspinall. We were very inspired by Cindy Sherman’s film stills and tried somehow to make them into songs. Politically and socially things were changing around us: Margaret Thatcher had destroyed the unions in the UK and money was worshipped for the first time I could ever remember.

Eventually I decided to study film at the RCA [Royal College of Art]. When I came out of there I was in the edit suite finishing a music video for The Pogues, when the phone rang and it was an agent inviting The Raincoats to go on tour with Nirvana. Kurt died, but we still toured and we made an album for Geffen.

Next I formed a band called the Hangovers. We toured around the US and Europe and then I adopted my first child Honey, then later Lei Lei. I directed lots of music videos, mostly for bands associated with Rough Trade, and made art films and wrote songs. I also studied attachment theory, counselling and psychotherapy. 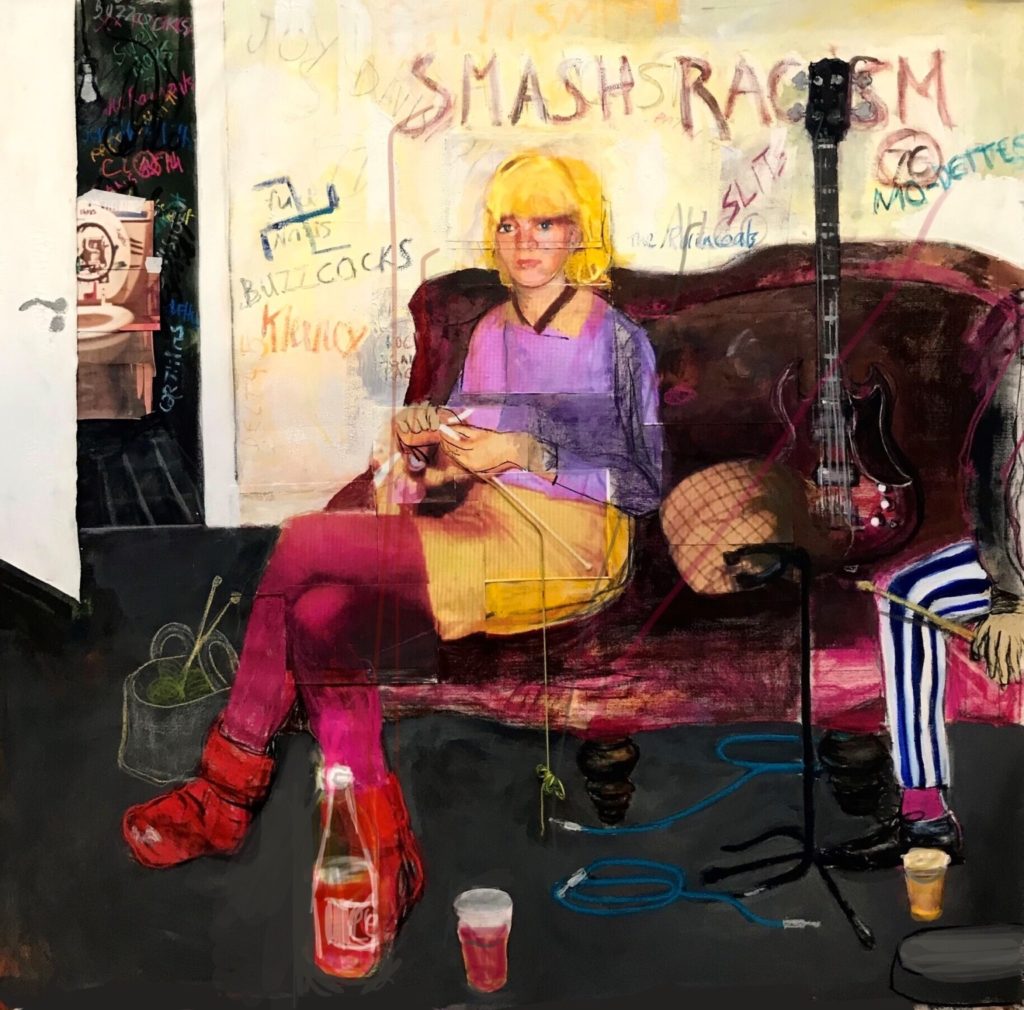 So what have been the changes? The internet, mobile phones, social media have all shifted things so much: more connection, less connection. Easier to disseminate ideas but more ideas: more information, more disinformation. Obviously social media has given a platform to visual artists through Instagram and amazing sharing opportunities for musicians through all the different platforms, starting a long time ago with Myspace.

I’ve changed too. As I grow older, I feel more personally empowered, but also the art world  – and especially the UK – seems to have embraced outsider women artists of a certain age, so this has been a bit of a life saver. The Raincoats have performed in the Pompidou Centre, the Museum of Modern Art in New York and in art centres and galleries around the world, including playing in Lisson Gallery inside Dan Graham’s sculpture in 2018.

I have done many solo performances, talks, panels, played with other people and for some years I have had an amazing time in The Gluts working with artists Hayley Newman and Kaffe Matthews. A film I made with Helen Reddington, called Stories from the She Punks, has toured the UK with Doc ’n Roll films and I had a solo event at the ICA [Institute of Contemporary Art] in November 2019, showing a selection of my films and paintings, and performing music. 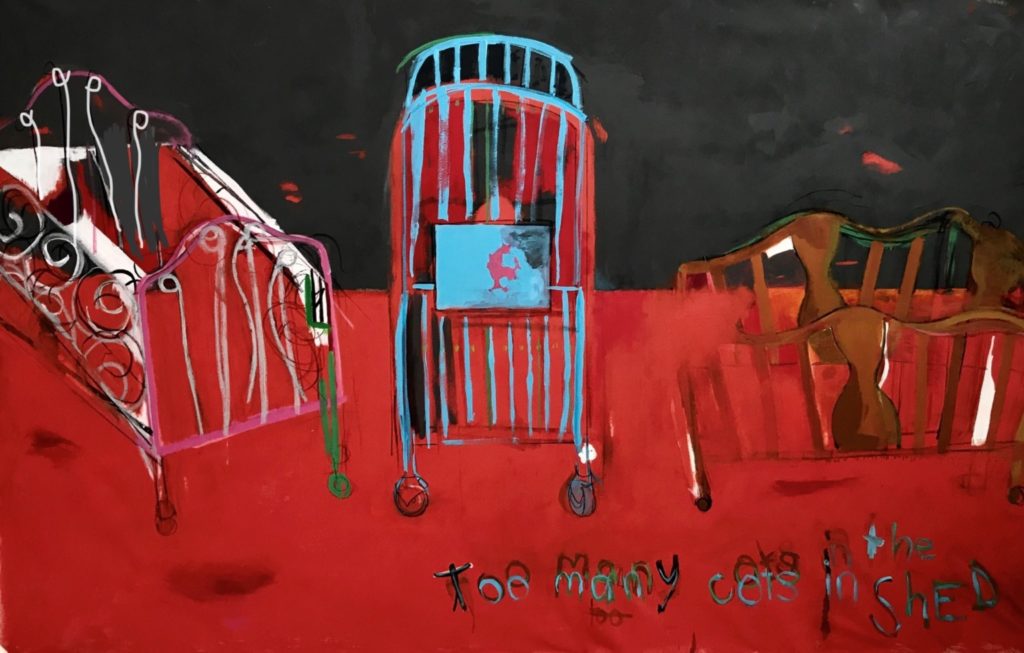 In 2014 I became involved in painting. In fact I fell hook, line and sinker for paint. My painting was mostly about gender politics, sexual assault and religion as well as some autobiographical work. I had been making films and music but suddenly I felt that I could make my world out of paint. It could be real or imagined, it could be clever or stupid, it could be expressive or tight-lipped and it could be full of colour and light. I attended multiple classes, life drawing, observational painting, the Royal Drawing School and eventually ended up at Turps Banana in Elephant and Castle. Sometimes I felt I was a bit out of synch at Turps, but my history came with me and I felt excited by repurposing classical paintings, by embracing feminism, collage, graffiti, or ‘vandalism’ as my graffiti was gleefully dubbed by Ivan Seal.

In March 2020 I had a solo show of my paintings and some films in Paris with Galerie Arnaud Lefebvre. The graduation show of the Turps alumni of 2020 is coming up in September 2021 and then some of us are going to Los Angeles to finally be in the group show we have organised there. I am hoping to have a solo exhibition in London in 2021/22.

a-n is new to me. As a travelling musician, it was off my radar until I became involved with painting. Now I know what a great organisation it is. It helps artists in so many ways, with connections, reviews and information, offering a safety net and help with insurance, grants and funding. It is such a valuable resource. I have been the very lucky recipient of a bursary to go to Los Angeles to be part of a group show there, in an exchange with artists we met at ‘Supermarket’ an amazing indie art fair event in Sweden. During lockdown I also applied for a grant to help with living costs, which has really helped me to continue paying for my studio and art materials. 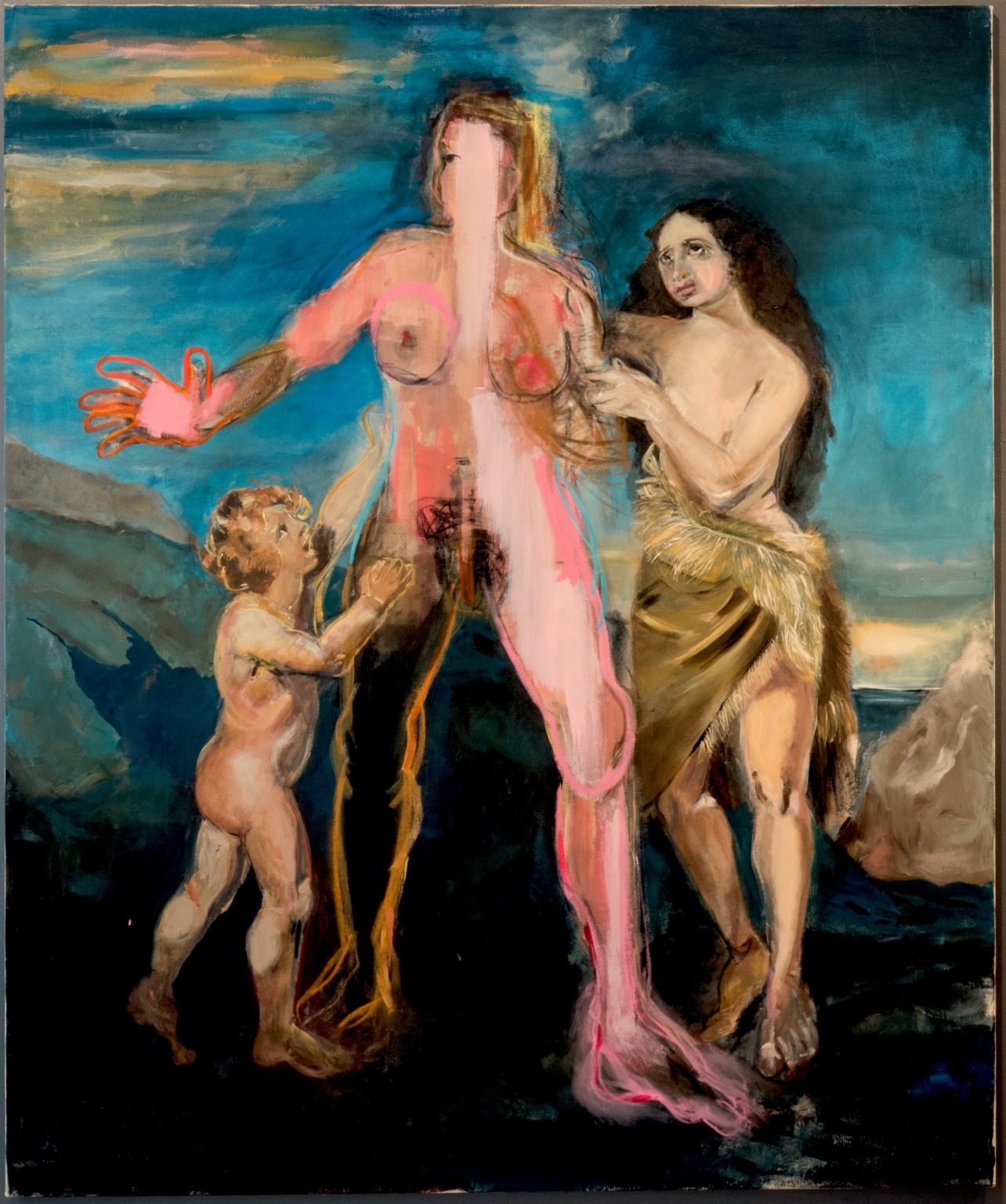 20 years into the 21st century, what is the role of art and the artist?
I believe the role of the visual artist is to get people to look. I always liked Arte Povera for that, making a pile of tyres or a pile of wood or oranges beautifully observed. I am drawn to making work that highlights the struggles women have had, through rape, abuse, imprisonment, or merely being overlooked and ignored.

The role of the artist is manifold. To reflect back to people what they already know, to stretch people slightly, to comfort, to control and to surround them with beauty or thoughtfulness. With music – especially live music – there is a social bond of shared experience and love for a particular group or record. These experiences are collective in a live situation or even listening together in a domestic setting.

With painting, although the works may be experienced collectively, I feel it is a more solitary moment. The crowd does not always add to the experience. Then the value of creativity, which is perhaps a different question, is enormous. Creativity is found in the domestic sphere: cooking, gardening, knitting, weaving, pottery, decorating the home, among many other things. These have been somewhat overlooked, especially if they are performed by women. But these things keep us engaged and sane.