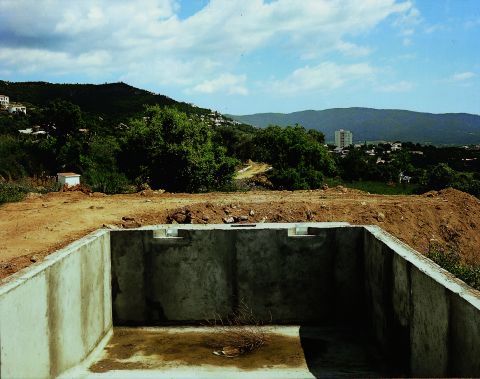 The profile of Jean-Marc Bustamante, within the consciousness of the British gallery visiting public, is surely going to receive long overdue appreciation in the current exhibitions of his work .

As one of Europe’s most refined, and considered artists, discovering his work is an enlightening and challenging experience; the visitor being presented with art that operates on many psychologically different layers. However, also being playfully seductive, the lucidity expressed throughout his career retains a freshness and accessibility that frees the work from purely gravitas and intellectual gestures.

Photography is at the heart of Jean-Marc Bustamante’s discourse, acting as the “primary form of work – a pre reflexive, pre logical” medium. Finding his voice as a photographer in the 70’s a desire to create art has been explored where urbanity and nature meet, often where civilization begins to be compromised by natural terrains, and where one composition transcends the processes of time on landscape.

Detaching himself through his lens from his subjects, he has instilled a subtlety and sense of integrity behind his photographs hinting at primal, spiritual and sociological notions of place that remain evident throughout his emergence as a significant artist in his own right.

The idea for this quietly named ‘Dead Calm’ exhibition at Edinburgh’s Fruitmarket Gallery was born through conversation between the artist and Penelope Curtis (Director of Tate Britain); a shared fascination of the boundaries between photography, painting and sculpture, resulting in the exhibition being collaboratively organized between The Henry Moore Institute and preceding a further show there (21st April 2011 – 26th June 2011), and at the Timothy Taylor Gallery in London.

Co-curators Penelope Curtis and Fiona Bradley have, in line with the ethos of the gallery’s outreach programme, presented a complex selection of works with a progressive and ‘layered approach to interpretation’ that appeals to visitors both familiar and new to this artist, the catalogue accompanying the exhibition offering a comprehensive insight to this artist’s development.

To understand Jean-Marc Bustamante, it is fitting that a series of three photographic prints from his seminal ‘Tableaux’ series, greet visitors on arrival. Contained within the extent of dark rectangular frames are locations set within the elements of sky, dusty ground, and shrubbery on the periphery of Barcelona. ‘T.11.78′ and ‘T.25.79′ both record the visceral human act of building and its relationship with the land – an empty swimming pool construction cast in concrete and imprinted into the earth, and the primal scarring of brick footings forming space and reaching upward to the sky, respectively.

The images depict landscapes devoid of events and actions, their stillness acting as a deliberate antithesis to the accepted reading of an image. Although these images are of settlements of sorts it is the essence of nature and time that presides as a unifying characteristic.

“For me these landscapes are not banal at all – I love the light, the colours and I try to make the objects radiant” – Bustamante

At their conception, Bustamante was rejecting the ‘poetic snapshot’ – so synonymous with French creative photography. The more whimsical moments of Cartier-Bresson have been replaced by large format ‘frontal autonomous planes’ enabling a physicality and encounter ‘as art’. Described as ‘slow snapshots’ it is the way of seeing that is fundamental to the power of this series. Their infinite focal depth, rich detail and formal composition incite a heightened sensitivity to the concept of place, affording the viewer room to fully interpret the scene.

The photographic process defines Bustamante’s obsession with place and landscape. Yet, as with much of his work, the method of presentation is pushed to reinvent the medium, merging boundaries between purely photography or painting, and establishing methods carefully named as ‘Tableaux’, ‘Lumières’, or ‘Panoramas’.

In a gallery format the work takes on further qualities, drawing the viewer into a sensory relationship that breaks from the contents of the frame. Sculptural pieces from the 80s and 90s reinforce the basic sense of balance formed out of the almost magnetic tension of pushing and pulling of surfaces into space, that Bustamante handles so magically. Surface is key and perhaps best reflects the ‘in-betweeness’ of space or the ‘nothingness quality’ where negative spaces are imagined and formed.

‘Double Miroir’ (1991) in its stark architectural simplicity of jagged painted steel sections enclosing two blank rectangles of the gallery wall, invites the viewer to comprehend the dynamic between physical space and the context of place; Recurring tricks at Bustamante’s disposal are revealed in games of shadow, self interpretation, and ambiguity.

Photograph and object become further entwined in ‘Stationaire II’ (1991); a stack of 12 cement boxes hiding and containing photographic prints that reveal layers of cypress trees obscuring glimpses of sky. Assembled on top of each other no photograph can be seen, and the whole takes on a monolithic mass resembling to me the iconic and ‘brutal’ Glasgow Gallowgate tower blocks.

The arrangement and progression through the gallery space mirrors the organic sense of connectedness tying the many disciplines, themes and ideologies inherent in Bustamante’s career together as part of a greater whole. As one climbs to the upper level, a departure from the dense and earthy displays that make up the lower level and more formative years of the artist’s career, gives way to a more playful, and light language in recent paintings. ‘Take something hot and cool it down‘ is the title of his forthcoming show at the Timothy Taylor Gallery (20 April – 21 May 2011) and the name eloquently matches the arrival at the current creative output of Jean Marc Bustamante’s ‘Panoramas’.

‘Now I’m much more playful. I’m more interested in the idea of being colourful. Now I think much more about light – so in a way the whole show is as if you’re moving up from the ground towards sky’ – Bustamante

By Translating and refining playful hand drawn sketches through electronic scanning and enlargement, combined with Industrial printing techniques, this bold series of applied ink on Plexiglas panels is a logical and responsive redefinition of what constitutes a painting. Ever the flexible artist, Bustamante is now balancing his photography with the explorative lines of drawing, light and colour, as opposed to the earlier directions of mass, gravity and more formal trickery. A playful abstractedness is perhaps the essence of all these ideas – apparent in the embracing and collision between 3 dimensional and 2 dimensional forms.

These paintings, in their creation and light transmitting presence on the wall, retain photographic processes at their heart. Where the almost dizzying richness of focus in his earlier work arrests the eyes to realize places, here the paintings show a more enlightened response to Bustamante’s visual sense of the world. Throughout this exhibition it is apparent how photography has grounded the perspective with which Bustamante makes art. Avoiding the contradictions and downfalls of a purely conceptual artist a sense of visual meaning has been informed from the influence of the real places that his lens made images from. This results in qualities that communicate the timeless ingredients of nature, form, colour, light, scale and balance, evident whenever Bustamante is creating a felt tip sketch or making architecture.

Tom Manley is a photographer and digital artist focusing on the built environment, social landscape, architecture and the cultural fabric of cities across the UK.Â  He has recently started to freelance in photography and contributes editorial work to magazines and blogs. Prior to setting up freelance, Tom worked in architects practices for the last decade.