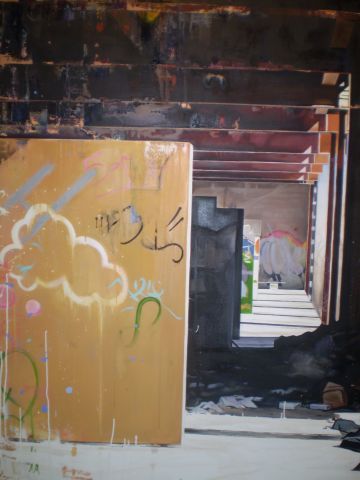 Livingston, Scotland’s fourth designated New Town is the venue for the two-man exhibition Utopia in Retrospect. Situated between Glasgow and Edinburgh and celebrating it’s 50th year in 2012, Livingston is an appropriate place to consider utopian ideals. Born in the mid-twentieth century when architects and town planners promised new and better designs for living “Make it in Livingston” is the slogan for this particular town.

The Hacienda is a seductive image, which both invites and holds at a distance. Is this the infamous Manchester dance club once jam-packed full of 24 hour party people during the 1990’s? If so, then Brown’s evocation of the present emptiness of this space has a melancholy which is similar to that of the 18th century French romantic painter Jean Wattau’s painting Pilgrimage to Cythera. In the painting Wattau pictures a group of young people embarking on a trip to Cythera the mythical island of love – a destination which is impossible to arrive at.

Brown plays with the notion that post-modern youth sub-culture is, in some way, linked to a romantic pastoral past. The question is “is this Utopian”? The Hedonism associated with The Hacienda (and rave culture in general) and which also applies to the 18th century party people in Wattau’s painting does not necessarily relate to utopian ideals. The party is over in Wattau’s vignette, Brown’s party, on the other hand, has not even started yet. His optimistic statement suggesting that the spaces he paints are places where “new possibilities and meanings can be found” hint that, for him at least, the mythical island of Cythera is not beyond reach.

Whyte’s connection with 18th century French romantic painters is more explicit. He paints old-masterly type idyllic landscapes in muted tones and even dedicates one of his paintings to Wattau’s contemporary Jean Honore Fragonard. He chooses, however, to create odd juxtapositions by placing these landscapes next to geometric boldly coloured shapes, which are more graphic design in style than painterly. Blue, pink and purple linear structures in various shapes of what Whyte calls “architecture” frame, slice through, lead towards, tumble down on, hover beside or encroach on the traditionally painted romantic landscapes. Titles such as On the Principles of Population and Kingdom of Final Causes provide no immediate aid to what these paintings are about. This is not a problem though since they are designed to puzzle, to make the viewer work. Whyte helpfully explains that the made-up landscapes are never meant to exist outside his imagination but are meant to “symbolise a particular state of mind”. Interestingly, both Brown and Whyte’s paintings are unpopulated, devoid of any human element. For them Utopia is a place without people existing in significant but abandoned spaces or in the landscapes of the mind.