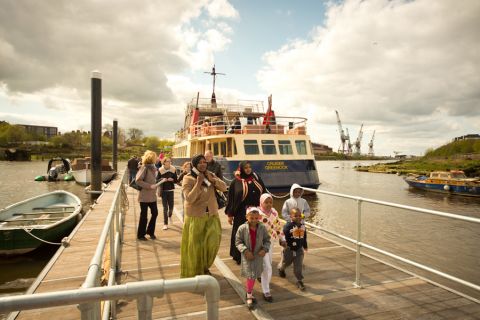 ‘This is a city where you can get things done as an artist’ Jeremy Deller recently admitted, attributing some justification for the life size inflatable Stonehenge mock up which descended on a corner of Glasgow Green to the East of the city centre, making a big impression.

This statement by the Turner Prize winning artist, surely a compliment to a city so rich in cultural identity, yet still so young in its post industrial transformation, may well be true and the diverse and significant ‘Glasgow International Festival’ a testament to all who have breathed life into the vibrant art scene in the city – However with budgets for art organizations and creative practice increasingly being slashed, the relevance, and meaning behind these works takes on a heightened role to be deemed credible, worth the expense, and to capture people’s imagination, carrying a lantern for art events in the future and offering new methods of engagement with the public, or should I say communities!

The collaborative approach of artists Matt Baker and t s Beall in creative working with the community of Govan has an investigative and therapeutic role that is deeply rooted in its site specific attachment, reconnecting the layers of history within this proud neighborhood and reawakening a sense of what is special about Govan and its story. “Composing and conducting an orchestra of artworks” on the theme of communication across the river, this event was particularly rewarding to both artists as it has strengthened and enabled connections and relationships through creative projects.

A festival titled ‘Glasgow International’ will no doubt operate on two scales, drawing on the city’s unique character, locale, regionalism and people, whilst secondly also providing a wider platform for the best in contemporary visual art to be showcased, and in so doing create some good PR for Glasgow as cultural destination, fun city, happening place, and event city.

In mentioning Deller’s contribution ‘Sacrilege’ in relation to this review of the one day celebratory event led by Matt Baker and t s Beall ‘Nothing About Us Without Us Is For Us’ (a culmination of collective activity and community focused workshops on the banks of the River Clyde, West of the city centre in Govan) I wish to highlight these differences in approach, scale and context at play here, and celebrate the notion of participation and engagement with a wider section of the community than perhaps your average art savvy gallery goer…

For people who experienced ‘Nothing About Us Without Us Is For Us’ unfolding on the water’s edge and across the Clyde, overlooked by the dramatic skyline of Zaha Hadid’s Riverside Museum, and the ancient Burgh of Govan opposite and lying South of the river, it would appear that some trans-generational ceremony or festival was occurring. A little bit of magic indeed, this program of events was borne out of collective work by both artists and wider elements of the community within Govan. Using the metaphor of ‘communication’ to celebrate and reawake connections to the city and beyond, transmissions were attempted across the water using sculpted string and cup telephones, an armada fleet carrying messages in bottles, choral serenades and maritime codes, and a larger than life operating ferry boat to gently shuttle people across the river for free, not to forget the giant operating trebuchets which hurled objects out from both sides of the river.

Utilizing these various methods to reach out across the water and for cultural experimentation, the landscape of Govan is poignant; rich in memory, identity and sense of local activism. Familiar signs of urban neglect, isolation and questionable methods of rehabilitation and planning have scarred Govan physically and emotionally as Glasgow adapted to its post-industrial status. Matt Baker’s and t s Beall’s use of art projects to symbolize healing processes and a new sense of belonging for the community, as it collectively attempts to harness signs of strengthened confidence to reassert itself, become valuable tools in creating relationships and dialogue where local government resources struggle to deliver.

As a result of these art projects this powerful and originally sacred area at the heart of Govan, so central to Glasgow’s story of industrial and shipbuilding prominence, became for the day, a place to engage with the river, imagine a future, and embrace a coming together of people to heal broken elements in Govan, and give voice to activity beginning to shape a new era for Govan.

Coordinating the event the artists established various local organizations as partners ranging from youth initiatives to housing associations, and commissioned a collection of individual artists to deliver workshops, poems and artworks with the community, that led up to the event. Taking inspiration from a plethora of maritime and traditional methods of communication, a unique series of projects were incorporated into the event. Launched from the banks once home to the momentous Harland and Wolf Shipyards, ‘The Govan Armada’ potently symbolized the desire for communication and respect for place, as carefully cleaned flotsam and debris from the Clyde turned into colourful vessels to carry bottled messages, inspired by the mailboats of St Kilda, a remote Scottish island.

Dubbed by the Glasgow Herald as ‘the festival’s most literally combative show’ and as ‘Gloriously Gallus’ by freelance Scottish art journalist Jan Patience, the event did have a lot of love in its togetherness and shared realization, recognizing the transformative role that creative practice can play in urban environments. Coupled with walking tours of the area and an evening dedicated to artist George Wylie on his 90th birthday, it opened many questions about the uniqueness of place and how we control our responsibility to the environment. A screening of ‘Why?sman’ the remastered film illustrating Wylllie’s humorous and ambitious approach led into a discussion on the power of Govan through medieval ages, and heated conversation about future development of an archeological and historically sensitive site, at the heart of Govan. I’m sure Wylie who sadly died last week would be honored by this respect shown to him, and his ‘colorful’ practice.

So back to the East End and Deller. Why Stonehenge? – a spontaneous idea – a mad gesture – or for some educational creativity? Initially one can wonder why here on Glasgow Green, how does it respond to this place and context; what’s the connection with Glasgow? I kind of want there to be one… although as if fallen from the sky there’s no tangible sense of belonging to this site. This is big and bold, though, if not a little kitsch. Playing with cultures, and making connections with a distant generation and history, at odds with our constant search for enjoyment and excitement, there is a complexity here for one to speculate on. However, its primary attribute for being taken to peoples hearts lies in its ability to make adults and children laugh and have fun as might similar experiences found at a fairground, water slide, or beach.

The GI Festival is growing in significance and is now firmly established. As one event specific to Govan ‘ Nothing about us without us is for us ‘- suggests by its title values of openness, engagement and participation, which the ethos of the festival would surely align with.

Deller’s inflatable ‘Sacrilege‘ is a powerful implementation of what artists ‘can do’ and any message it sends out risks being missed by those who simply bounced and laughed and got on with their day. However in Govan the message is more about ‘what needs to be done… and how to do it right’… It is about people, place, relationships, and making decisions… it shows how hard communication can be, and it hints at how communities restore a sense of place, and collective ideas are borne.

Tom Manley is a photographer and digital artist focusing on the built environment, social landscape, architecture and the cultural fabric of cities across the UK.Â  He has recently started to freelance in photography and contributes editorial work to magazines and blogs. Prior to setting up freelance, Tom worked in architects practices for the last decade.