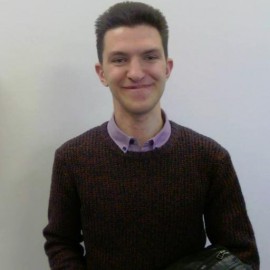 Returning to familiar symbols and a new fascination with painting ‘floating objects’ I produced some of my last paintings on panel before utilising plywood board to be able to manufacture more paintings with less time spent constructing their frames. The […]

It has been some time since I posted about anything other than cinema reviews and that is all going to change by not neglecting this blog from painting anymore. Since finishing the Graduate Residency with AirSpace Gallery in Stoke-on-Trent in […]

FILM REVIEW GRAVITY, 2013, co-written, co-produced, directed, and co-edited by Alfonso Cuaron. ★★★★ out of ★★★★ An absolute masterpiece if there ever was one, Cuaron demonstrates why he is one of the most important directors alive today. A science-fiction film […]

FILM REVIEW PACIFIC RIM, 2013, co-written and directed by Guillermo del Toro. ★★★ out of ★★★★ After an abscence of five years since HELLBOY II: THE GOLDEN ARMY, del Toro makes a triumphant return to the silver-screen in blockbuster style […]

FILM REVIEW STAR TREK INTO DARKNESS, 2013, directed by J. J. Abrams. ★ out of ★★★★ The highly anticipated sequel to 2009’s reboot of the STAR TREK film franchise disappoints in almost every means at it’s disposal. However, our villain […]

Mock Artist Talk +4 Q: A few weeks have passed since your debut solo show ‘Grandfather’ at Airspace Gallery from 25 January to 2 February. Where did the motivation to create the surprisingly different paintings featured in the show come […]

I Moustache You a Question About These Contemporary Paintings Attached to this post are two images of sketches to new paintings that have yet to be produced physically. The first image contains sketches of the proposed ‘moustache paintings’ (see post […]

Working men’s clubs and pubs An unusual spot of influence to the visual imagery depicted in the contemporary paintings has come from the post’s eponymous title. The recent exhibition visit to the UKs capital hubbub for culture and arts has […]

End of Graduate Residency The conclusion of this 6-month Graduate Artist Residency here at AirSpace Gallery from September 2012 to February 2013 resulted in the cultivation of a debut solo show that will forever be listed on the curriculum vitae, […]