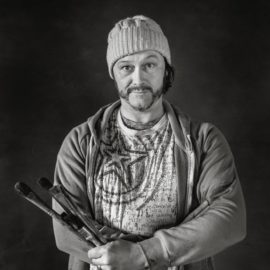 Dex Hannon studied in Manchester and now resides in Yorkshire. Based at SOPA Creativa studios in Huddersfield. His work is part of several private collections, he has featured in books and magazines, in 2018 he was chosen as one of the top 50 artists for the magazine Art Share Love. He was shortlisted for the Refresh Art Prize in 2019. His work features in the book Art Folio 2020. Dex Hannon goes where the idea takes him. The idea drives the choice of medium. He paints. He makes and uses sounds. He also takes photos, and is also known to shape sentences into interesting stories. He is influenced by the music he listens to, as he works as much as he is by the artists Mark Rothko and Gerhard Richter. An abstract expressionist, working in paint, digital and sound. The choice medium is driven by the idea. Mixing techniques and bold choices he creates a battle between foreground and background. He works in rapid strokes, letting the moment and music influence movements of the brush. Interlocking raw strokes repeating to form the illusion of depth. Creating intense, emotional paintings. Sometimes the painting will be the end, sometimes the painting is ‘remixed'. Using photographs and digital software, he will remix the original painting. The new digital work, will reimagine or reinterpret the original work. The concept of a remix always interested him. A song is released with a remix as a B-side. Sometimes the remix would become bigger than the original song. On its own the remix could not exist. It owes its existence to that original song. Yorkshire, England