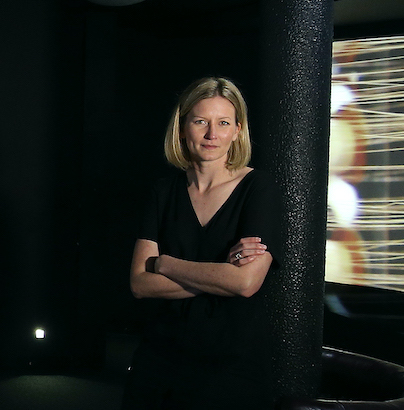 Elizabeth Kwant is a Manchester based artist, researcher and curator who works in film, photography, print, and installation. Her work investigates contemporary geo-political and social issues; migration, immigration, legacies of colonialism, modern day slavery and the associated concerns of representation. She has, in partnership with local organisations, produced and participated in a number of socially engaged arts projects, with refugees and asylum seekers. Recent projects include Habeas Corpus (2018) a series of screen prints commenting, with playfulness and irony, upon British Immigration Removal Centres. The prints reference vintage travel posters and colours allude to institutional architecture and mass produced furniture found in public buildings while at the same time each records the capacity and number of detainees at each location. The prints have been realised as a series of flags, occupying a physical presence within the space and thereby embodying an act of protest. In-Transit (2017- ongoing) documents a series of site specific performances staged by the artist across the Mediterranean, re-interpreting through movement various migrants stories from those places. Working in partnership with a Manchester based charity, The Boaz Trust, the artist spent time listening to accounts from refugees and asylum seekers, requesting them to re-enact their journeys through movement. These accounts have been re-interpreted and embodied by the artist in the public realm. The performance is meant in part as activism, in part as memorial. Thus far, the artist has performed this work along the primary western migration route in the Mediterranean from Morocco to Spain (Casablanca 2018, Tangier 2018, Algeciras Spain 2017) - across the Straits of Gibraltar - documenting one of the deadliest migration routes in the world. Her current research, Surveying the Land: Legacies of Slavery (2019- 2020) a practice based research project in partnership with The International Slavery Museum Liverpool, was awarded Arts Council funding. The project will realise a new moving image installation co-created with female survivors of modern day slavery, making reference to the historical legacies of the trans- Atlantic slave trade through dance, movement, sound and film. Kwant has exhibited locally and internationally. Selected exhibitions include; Displaced (2019) Travelling Gallery, Scotland, Print: A Catalyst for Social Change (2019) Bury Art Museum, In-Transit (Solo 2018) Canada House Manchester, Radical and Real Film Shorts (2018) HOME Manchester, AIR Gallery (2018) Manchester, Waiting (2018) 35 Chapel Walk Sheffield, In-Transit (2018) Genesis Centre Paris, Across the Seas (2018) Sam Scorer Gallery Lincoln, IWAYA Community Arts Festival (2017) Lagos, Mediterranea (2017) DOK Artist Space, Edinburgh, In Nothing Flat (2017) Mark Devereux Projects, and Framing the Crisis (2017) System Gallery Newcastle. She is the Founder and Curator of Zellij Arts, an artist-led project highlighting the work of emerging artists working trans-nationally across geographic borders from Manchester to the Middle East. Kwant is an associate member of The Castlefield Gallery Manchester. Manchester, UK