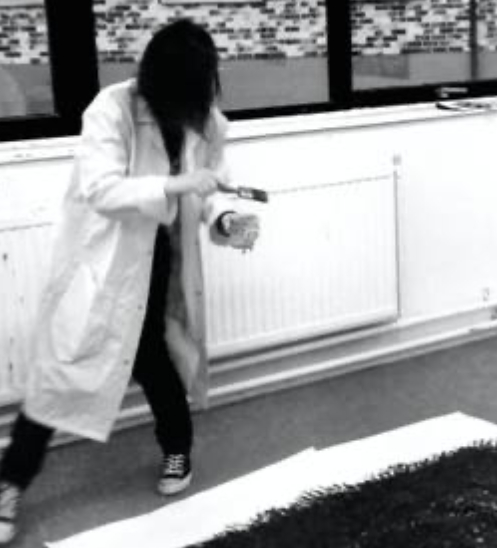 I had a look at Mona Hatoum’s work online, and I’ve actually seen her work in person at the Whitecube in Bermondsey. Her work is often about conflict and contradiction which invokes tension in the viewer. I think I want […]

A question I have been asking myself this weekend is where does my recent work sit with the idea of the uncanny? The uncanny came about in Freud’s essay, which stems from the word unheimlich, and he writes that it’s […]

I was choosing the photos to be in a digital portfolio for assessment next month, and it was an opportunity to look closer at the photos of the metal sheets. I agree with what Mona said in the last tutorial. […]

I tried squeezing washing up liquid from the bottle onto an A4 piece of cartridge paper. The presence of green goo pooled on the paper is what I expected. It was slightly more viscous than water, but less than oil […]

I winced at the thought about using fairy liquid as a medium to pour onto paper. I find it ironic as a material because it’s clean, in the sense that it’s free of bacteria, and its function is to clean […]

In the tutorial, Mona said I could be playful with the work and add something unexpected in it and to incorporate the irrational and to think about the textures of the materials. I randomly had an image of my sculptural […]

Sol Lewitt Drawn to the 70s “I think I’m grappling with the tension between the rational and the irrational forms of making work.” Subconscious, spiritual – incorporate into work Jung’s Redbook Find a way to bring the two together in […]

The rubbings from the wooden flooring is at the inside of this item, and the outside is constructed digitally using Illustrator. The wood grains looked like fingerprints, so I named it Fingerprint. Free association is a psychological technique used to mine […]

Constructivism, minimalism, surrealism and the unconscious. I’ve researched these topics and was more passionate in finding out more information about surrealism, dreams and unconscious, and would like to research this further than the first two listed. I have an interest […]

Surrealism first began when Andre Breton published a manifesto in 1924. Breton was enthusiastic about Sigmund Freud’s works about the id, ego and superego. Combining the ideas of the unconsciousness and subconscious with Dada (already a movement characterised by absurdity, […]

This is a digital work I made on Wednesday. Seeing Hertz was originally a sculpture I made in 2015. I photoshopped a face covering over the mouth and nose of the skull to comment on the present time. On the […]

I’ve looked at Sol Lewitt’s text ‘Paragraphs on Conceptual Art’ (1967). I agree with Lewitt’s explanation of conceptual art to a certain point, that the idea/concept is the most important aspect of the work, and the process of making it […]