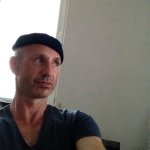 Fashioning my universe from the traces of other men's lives and a good amount of glitter. Founder of artist-led initiative Glitter Ball showroom & projects, 2018. Recipient of the Region Uppsala artist's award 2017. www.stuartmayes.com studiostuartmayes on instagram Enköping & London

I have failed. Admitting it is both a relief and shock. I am not used to failing at things but in this case there is no getting around it. It is quite a spectacular fail too – so I feel […]

The question of where I fit has been rattling around again. Over the last few months various things have made me wonder about this – a rather wide range of things actually. I think that I survive (or at least […]

I have been playing a wee game this week – inspired by an announcement about an advanced research masters for artists and designers. It is very easy and very enjoyable, you simply read any academic call and say “making” […]

Almost exactly as I made that last post I got a message letting me know that there are two studios still available at the Hospital and that I was very welcome to come look at them! I read the mail […]

Every year as part of my annual appraisal at the council I have to fill in a separate form about my ’other employment’. Along with asking for basic information concerning my name, address, and job at the council the form […]

I continue to turn up at the studio, and today it was nice to not know what I would be doing before I got there. Or perhaps it is more accurate to say that I was not already thinking about […]

I realise that reflecting on this particular past year focusses very much on what has been happening for and to me. Living and working (for the most) in a small town during a pandemic my focus has been rather limited. […]