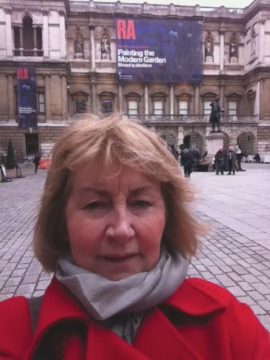 I changed my name to include my maiden name, Bright. Two reasons - homage to my dear Dad who taught me to draw and there seem to be several ValJones's so hope this helps! I paint because I need to. Recently completed my MA Fine Art at Suffolk University, Ipswich. Enjoy blogging about progress - it seems to help. Landcsapes, the human figure, sense of place, in other words all the concerns of an artist in reflecting impressions of the world. Sudbury Suffolk

Wow….. months since I blogged. So much and Nothing has happened. Covid lockdowns – In common with many artist friends, I felt a sense of paralysis. Unable to move forward…. stuck ……waiting for inspiration….for things to get better. Husbands illness […]

As people often begin a new blog… I simply can’t believe it’s been so long since I blogged. But not having anything significant to say is the main reason for my absence. Now I think I have something to say. […]

Not sure this is the correct use of an Art blog but although I’ve obviously expressed verbally, to friends and family, my joy about things I’ve done this summer, it still seems important to write the words down for posterity. […]

Can’t believe this is my first August blog post!!! Used up lots of nervous energy and trepidation by painting since my last blog. Fear has proved an excellent spur to creativity.I’ve managed to bag another week at Brisons Veor in […]

This , I THINK’, the final version. Like I said before – each painting is like reinventing the wheel. I knew something wasn’t working but it’s taken a while and several reworking to discover how to get it right. But […]

Well I knew I’d change my mind. Started the reworking by turning this into a portrait instead of landscape. That seemed to help emphasising the height of the cliffs. Then I put in some lines and drawing…. I always say […]

I think I’ve resolved the Walton landscape. Just enough detail to nail it to a place but verging towards the abstract. I managed it by allowing my mind to disconnect and following the dictate of the medium. Tentatively pleased with […]

This image resulted from a failed painting which I obliterated with the paint left in the palette. It suggested an image of found objects which I had sketched on Walton beach a while ago, after a period of stormy weather. […]

Sketchbooks- a piece art in it’s own right? I recently delivered a workshop entitled The Magic of Sketchbooks. I enjoyed researching the sketchbooks of famous artists – Henry Moores’s Sheep Sketchbook is a joy. Van Gogh’s letters, Picasso’s myriad of […]

I’ve been re reading my initial blogs on a-n. Trying to discover some progress, development in my thoughts and achievements in art and life. Some aspects remain constant – lack of self-belief both in life and my art but there […]

Well I said last time that the Clematis painting had worked and I thought it had. But after walking away and coming back two days later, I hated it. A BAD painting too fussy, too figurative too awful. So it’s […]

How could I have forgotten to blog about my crazy week in Cyprus? Here’s a belated assortment of impressions of the residency at Cyprus School of Art in Lemba, Cyprus. Very, very basic accommodation but so what… the sun shone […]