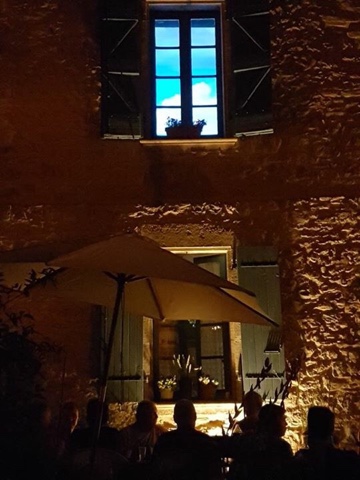 When the night time comes to a tiny village somewhere in France, we see a day time sky that is typical of an Irish landscape. Looking above into a window of a house, there is a film playing that features an Irish sky, with clouds and some blue sky. It is projected from the inside of the house onto the window and this is the work of artist Ian Wieczorek. It is a video work that is situated in the tiny village of Larroque, Midi Pyrenees  and was installed as part of the Larroque Arts Festival. The work creates a dialogue between time, space and site. It manifests itself as a form of Robert Smithson’s ‘nonsite’, where pieces of a place are taken and then re-constructed in a different manner in a completely different place and space. For the Land art movement, the sky above the actual work was pivotal in viewing and giving perspective and meaning  to work below on the ground. In  Wieczorek’s work, this same sky that was fundamental to the Land art ideas (in this case an Irish sky),  is used as the  materials and Wieczorek describes the work himself as follows:

‘The passing clouds of an Irish day infiltrate French night, establishing a link between two moments of time and place, illustrating the fragility of chance and the subjective nature of reality’

The work functions as a time based art piece that creates 2 separate streams of  time that are contrasted by each other. When the day time prevails there is nothing to be seen in the window, but as the sun slowly begins to set – something does then begin to appear. The light changes from daytime to twilight and then to darkness and this of course happens over a slow period of time. This outer lying narrative frames the actual video projection, where we see the passing of time at a different tempo as clouds drift gently past the blue sky. Watching the speed of the clouds and their movement  while framed against the real time transition of light to dark makes us realize that such a chance encounter is indeed both natural and un-natural. Artists such as Robert Smithson and also Olafur Eliasson have of course explored such encounters and the ‘subjective nature of reality’ that Wieczorek’s talks about here.

There is a dis-quieting and  a spatial dislocation that quietly subverts our perceived viewpoint – rather than looking in at something projected from inside a window, our experience of looking at daylight as ‘outside’ makes us feel that we are in a darkened space or room and in fact looking ‘out’. In other words, it’s a small intervention that reflects ‘Das Unheimliche’ (the Uncanny).

Wieczorek’s artwork can therefore be placed within the same philosophical narrative, where artists have used nature itself  to awaken our senses and to reveal such natural phenomena as we have never seen it before.