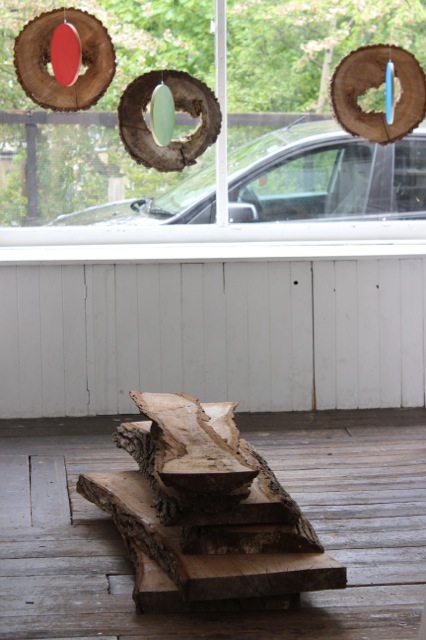 ‘Never to get lost is not to live, not to know how to get lost brings you to destruction, and somewhere in the terra incognita in between lies a life of discovery’.[1]

For her exhibition, A Sense Of Place, Caroline Wendling displayed a collection of films, sculptures and prints that map the memories of her daily walk from home to studio at Wysing Arts Centre, Cambridgeshire. The varieties of forms mimic the almost uncanny sentiment of these walks, whereby a familiar and well-trodden terrain is with each new journey unfamiliar and ready to be (re)discovered. The works represent the same, yet infinitely changing path. Malleable. Unpredictable. Amorphous.

Rebecca Solnit knew this of places when she wrote her book A Field Guide to Getting Lost, a homage to wandering the unknown. She says: ‘Any place can be mapped infinite ways […] You realize that no matter how much terrain you cover there’s far more than you ever will.’[2] Solnit believes that getting lost is a passage one must take in order to learn, gain knowledge and truly encounter life at its fullest. Wendling opens herself up to getting lost on each of her walks; she relentlessly renews her receptivity and inquisitiveness to a repetitive, quotidian act. For Solnit, this willingness is fundamental. ‘One does not get lost but loses oneself […] That thing the nature of which is totally unknown to you is usually what you need to find, and finding it is a matter of getting lost’.[3]

What Wendling finds inspires new work. A fleeting moment or a tiny fragment can incite an idea, even something as simple as a hint of colour breaking through the expanse of another. This is clear in Red Berry, Green World, Blue Field that adorned the front window of the gallery. The work is made of three circular cross sections of a tree trunk suspended next to three circular pieces of painted plywood. The equal-sized, rounded forms unify each of the elements in the title; a small red berry as significant as an entire green world. Solnit has written another text, Wanderlust, which delves into the connection between walking, thinking and inspiration.

‘The rhythm of walking generates a kind of rhythm of thinking […] This creates an odd consonance between internal and eternal passage, one that suggests that the mind is also a landscape of sorts and that walking is one way to traverse it.’[4]

Wanderlust traces the history of walking and its essential contribution to the creative and intellectual process for philosophers, writers and artists alike. The important ingredients being space, freedom and solitude, but also the body’s movement itself, as though the brain is a machine and the limbs are the cogs that power it. Solnit even aligned the rate of thinking with the average human walking pace when she titled the second chapter ‘The Mind at Three Miles an Hour’. Imagining the mind as a landscape, Solnit says how new thoughts are reminiscent of finding new features of a terrain that have always been there waiting to be discovered. Wendling describes these moments of discovery as moments of “clarity” that unveil themselves with each new walk, such as the fragment of colour in Red Berry, Green World, Blue Field. It is as though the eyes and the mind focus in together.

The wych elm wood in this piece and in The Wood on the Floor, a sculptural work made from untrimmed planks stacked on the ground, was acquired from the landowner of the forest Wendling walks through everyday. This work is not only significant in creating the sense of place that Wendling names the exhibition after, but also in showing how meaning can develop and personal connections can form through navigating a ‘Terra Incognita’. ‘Terra Incognita’, as Solnit explains, is the term given to an area on a map which is unidentified and untraveled (according to the maker at least). This, however, is dichotomous. As marking out an area of unexplored land makes the acknowledgment that there is something there to be explored. It is both known and unknown simultaneously. The play between ignorance and awareness is exhibited in Wendling’s work by the conscious effort to find that which is not yet consciously known. Again, one must lose ones own self. The charting of Wendling’s own Terra Incognita is shown in the three works Walk I, Walk II and Walk III, where her trajectory is remapped each day, the routes influenced by and drawn from each new event.

For these three works Wendling used a unique process she developed herself called ‘ash printing’. The paths are sketched from memory then drawn using an illustrator software program and uploaded into a computer aided laser-cutting machine. Wendling sets the machine to scorch wood at level that leaves a layer of ash residing along the incisions. Lastly Wendling presses paper onto the surface, the residual dust producing a relief. This procedure not only uses a natural medium found in the forest, but is also symbolic of walking and thinking itself. It is time-consuming and gradual. Wendling described it as “the long way round” and thus gives a journey-like and explorative sentiment.

The process is transformative; another important quality of getting lost according to Solnit:

‘The things we want are transformative, and we don’t know or only think we know what is on the other side of that transformation […] Certainly for artists of all stripes, the unknown, the idea or the form or the tale that has not yet arrived, is what must be found’.[5]

It is a fundamental aspect of art in its most general sense, as creation is nothing transformed into something or one thing transformed into another. Prevalent in Wendling’s work is a focus on metamorphosis being the art, whether it is recorded on paper or happening within the mind. The walks themselves, from home to work, signify the conversion from leisurely to productive thinking. Adding to these concepts of journeys, evolution and idea generation are the two pieces in the exhibition: Four Walking Drawings, a work on paper using graphite, a traditional artists’ medium that is found in metamorphic rocks; and on a plinth Home to Studio Sketches, a sketchbook full of pencil drawings depicting thoughts from origin to fruition.

In Wanderlust Solnit makes a case of walking that is almost a rebellion against the modernisation of society with its buses, trains and aeroplanes. Against transport that hauls the body about, removing perspective on the space travelled and thus losing proper connection to the surrounding world. For Wendling, however, the natural and the man-made can be in harmony. A belief that was elicited by an encounter whilst being (unwillingly) lost in the Asian Art section at The Metropolitan Museum of Art, New York, a few years ago. Here she stumbled on a Chinese object: a huge boulder stood upon an intricate and ornate wooden stand made to fit the irregular circumference perfectly. She says there was a vast amount of beauty in this synchronisation and the significance imbued on the rock by man. One of the works in the exhibition, Stone, a small boulder pays homage to this memory. (It is interesting to note that a rock such as this may have been produced over thousands of years, forcing its way from the earth’s core to the surface. The slow and patient generation another metaphor for artistic thinking).

The combination of the natural and man-made actually occurs throughout Wendling’s exhibition. The Walk prints utilise both ash and computer software. Red Berry, Green World, Blue Field combines both organic and manufactured wood. The Wood on the Floor is paused in between (in transformation) as the trunk has been felled and sliced, but not yet trimmed into planks ready for building. Another work mapping a walk called Field looks from far away like an etching or an ash print, but is in fact a computer generated inkjet print. And two of the works, Catalogue and Walking on a Tablecloth, use video.

These two films are in fact the conclusions of Walk, Image, Imagine a commissioned walk by Smiths Row, Bury St Edmunds. It started at the Abbey Gardens and ended with a communal dinner Wendling prepared. Wendling had embroidered the tablecloth and invited guests to draw upon it, recording and entwining their own memoirs. Walking on a Tablecloth films Wendling retracing the markings and discovering the others’ thoughts (the actual tablecloth recently hung at Wysing Arts Centre for their Hey, I’m Mr Poetic exhibition). Catalogue, a collaboration with Susanne Jasilek, demonstrates an amalgamation of thoughts and influences by combining documentation with music, poetry and still photography. These films then, are not about the daily walk but about the place, the event and the participants’ collective memory. They remove the solitude of being lost and making it a shared experience.

Wendling’s exhibition almost reads as the artistic manifestation of Solnit’s beliefs in her two books: to walk, to think, to discover. We join Wendling by getting lost in her work, and are left wanting to get lost on our own when we leave.

‘It had come to me […] with a gradual sureness, a sense of meaning like a sense of place. When you give yourself to places, they give you yourself back; the more one comes to know them the more one seeds them with the invisible crop of memories and associations that will be waiting for you when you come back, while new places offer up new thoughts, new possibilities. Exploring the world is one of the best ways of exploring the mind, and walking travels both terrains’.[6]
– Rebecca Solnit