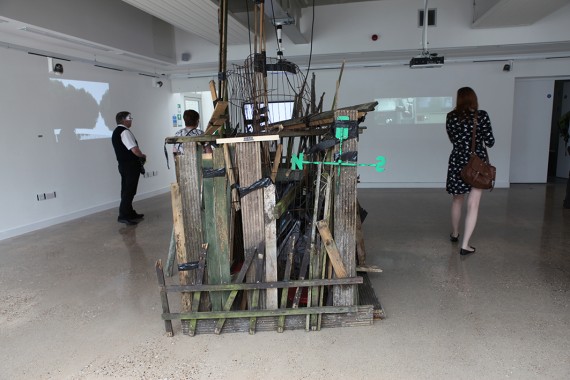 The archive is a contested zone. An archive acts as a repository for the evidence on which history, and the politics that follow from it, are built. But precisely because of this, the archive is also a site where much that is inconveniently preserved disappears. The exhibitions under review here, responding to archival material at Media Archive for Central England (MACE) and the Tennyson Research Centre, are the work of staff, students and invited artists at Lincoln University, separately curated, by Wang Yao and Jessica Pepper, but frequently overlapping in their shared concern with the contents and nature of public archives.

The question of what archives salvage and make visible and what seems absent is given a vivid sculptural form in Eleni Zevarigdou’s Chaos To Order, one of the centrepieces of Accidents Need Not Happen at Project Space Plus. A suspended net is sparsely studded with small paper ‘building blocks’, each of the six multi-coloured faces showing a monochrome image from the MACE archive. Other blocks spill through Zevarigdou’s net to the ground, scattered and fragile, vulnerable to the tread of gallery visitors, their information lost but, perhaps optimistically, within reach.

In Laura Johnson’s Breaphemerality, similar disappearances are enacted in projected footage of a local bridge, rebuilt many times since its first incarnation in 1902. The site appears and disappears on the wall as though in a state of permanent flux: now we see it, then it fades away, only to reappear again in some other form, recognisable but never exactly the same twice. Nearby, in Zhang Tao’s Decode & Reality, a series of digital stills break down repeatedly into the indistinguishable binary codes that generate them on the horizontal monolith of a high-definition TV screen.

David Fowling’s Tidy Is Safe riffs on the raw material that the digital archive often erases or conceals from view. A makeshift enclosure of stained planks, broken weather-vanes, bits of chairs, railings, wire and a child’s see-saw, houses a TV on which a digital video shows the process of the installation’s construction in fast-motion replay: a junkyard variation on Robert Morris’s Box With The Sound Of Its Own Making (1961), perhaps, whose random components are meticulously catalogued and, according to Fowling, destined for archival storage.

Further emphasising the material nature of the digital realm, Andrew Bracey’s One To Another reveals the mechanisms of the MACE celluloid-to-digital transfer machine in a split-screen projection, playing off notions of digital weightlessness against the ‘hidden’ technology on which it runs: the seemingly effortless ‘click through’ of a digital archive, like the euphemistic notion of ‘cloud computing’, depend on vast server farms made from dangerously-mined rare metals, industrially-manufactured wires and prefabricated warehouse construction methods.

These codes are implicitly extended to include other forms of obfuscating occult knowledge in James Phaily’s Tomorrow Knows, a short looped video in which reversed footage of crowds queueing to see The Beatles play a concert in the Black Country is accompanied by Phaily’s own Manson Family-style acoustic rendition of Tomorrow Never Knows, the closing cut on Revolver, the 1966 album that marked a distinct transition point in their evolution, taking them from mainstream family entertainers to counter-culture icons and from live band to remote studio entity.

This Beatles rendition offers one of several connections between Accidents Need Not Happen, the Project Space Plus exhibition, curated by Wang Yao in response to the MACE archive, and Some One Had Blunder’d at The Collection’s Courtyard Gallery, curated by Jessica Pepper in response to the holdings of the Tennyson Research Centre at Lincoln Central Library, said to be the largest archive dedicated to the Victorian poet’s life and work anywhere in the world.

Duncan Rowland’s ‘social sculpture’, Tennyson Guitarchive, places a hand built cigar-box guitar covered in decoupage texts from Parnassus between two tea chests, inviting visitors to serenade one-another in some temporarily reconstructed idyll. If Phaily invokes 1960s counter-culture, Rowland appears to be drawing a line from that era to the Arthurian and Mythological sources of Tennyson’s poems. It’s hard not to imagine Rowland’s guitar harbouring an ambition to appear in some Pre-Raphaelite scene on the cover of one of Tennyson’s own reprinted books.

Questions about erasures and the value of archived materials arise here, too, notably in Ali Roscoe’s The Domestic Archive, a dramatic fabric banner printed with a set of mundane household accounts. Elizabeth Wright’s Commodity, a set of small digital prints mapping the obliteration of whole sections from Tennyson’s diary by his wife Emily following his death, seems to merge the image of a plug-hole with that of a pomegranate, though visually it remains a kind of floating sign, impossible to read.

Wright’s erased archive might also relate, albeit obliquely, to Stewart Collinson’s enigmatic assemblage of paper, fragments and powder, Recovered Literary Coincidences From The Ruins Of The Dust Museum, or the sculptural wax and ash casts of a dessicated rabbit’s carcass hidden away in several corners of the space by Larissa Brennen. Brennen’s Starved casts are evocative and morbidly Victorian presences, operating, in the wider context, as a memento mori, a record of physical decay where the contemporary world reasserts itself – not least in Brennen’s note that the carcass was originally found, trapped and apparently starved to death, inside an abandoned apartment block.

A contemporary political resonance also makes itself felt in Mike Bruce’s Some One Had Blunder’d, a screen-print in which Tennyson’s lines from ‘Charge of the Light Brigade’, an account of military deaths during the Crimean War, are mapped onto a topological image of present day Afghanistan. Bruce’s concern with current issues also feeds directly into Jon W Higgins’ Cannonballs From The Valley Of The Shadow Of Death, a set of weighty looking black plaster spheres arranged on the gallery floor in a configuration based on Roger Fenton’s iconic 1854 battlefield press photograph, supposedly taken in the immediate aftermath of the Light Brigade’s charge.

As Higgins states in his documentation, it’s an image whose veracity has never been fully decided, and the question of whether Fenton showed what he saw, rearranged the spent cannonballs for picturesque impact or – more controversially – fabricated the entire image as a kind of memorial without visible bodies, the allusion in Higgins’ work to Fenton’s image puts contemporary concerns about the accuracy and trustworthiness of digital news images, especially those from contested territories and war-zones, into a context as old as the medium of photography itself.

A similar sense of collapsing the distinctions between current and Victorian concerns is also the point of Michael Wilde’s watercolour portrait, Tennyson, in which the subject appears in four different guises – the author, the depressive, the celebrity, and so on. Which of these equally viable representations we choose to prioritise will, of course, be dictated by academic fashions and political interests. Wilde’s four part painting is shown in domestic frames and each image is coloured with the same outsider-ish intensity, as though made by the kind of obsessive fan often assumed to have been a product of the late twentieth century.

But then, as both these exhibitions suggest, the very archives used to construct one version of history, in which there is no alternative to present arrangements, will – like venom that contains its own anti-toxins – always hold the potential for a very different set of outcomes, readings and possibilities. In any narrative of social progress, or Neoliberal inevitability, or digital triumphalism, potential alternatives to present trajectories are dismissed as unreliable accounts or left to gather dust, while the interpretation of past events is limited by selective uses of archival evidence.

Questions about the construction of history quickly turn political, whatever the specific intentions behind them might be. Does a critique of post-war systems-built housing focus on the corruption and incompetence of the 1960s public sector or the corner-cutting and profiteering of the private contractors they commissioned? Does the fact that so many issues sold as the unavoidable by-products of digital technology pre-date digital media by decades cast doubt on their inevitability? As the curators here suggest in an exhibition note, archives not only document the past, but can also expose unexpected perspectives on the present and its future possibilities.

Accidents Need Not Happen & Someone Had Blunder’d ran at Project Space Plus & The Collection, Lincoln, between 25th June – 26 July 2014.