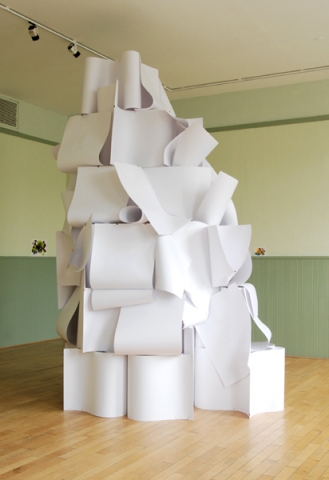 Exhibited in one of the old classrooms at Scotland Street School Museum, a Charles Rennie Mackintosh designed building south of the Clyde (the last one he worked on apparently), Multi Module is a ceiling height floor-based sculpture. It is shown here along with a number of wall presented pencil and felt-tip pen drawings and other works on paper, these arranged along the top of a dado rail above tongue and groove paneling. If these wall presented works could be termed ‘works on paper’, then Multi Module is best described as a ‘work of paper’. The self-supporting monolithic form appears to be constructed of just three materials – A1 sheets of white paper, small multi-coloured binder clips (the triangular type bulldog clip with arms that can be folded down once attached) and paper clips. The sheets of paper are formed into various curvilinear shapes and tubes and then held together and to each other by means of the paper and binder clips. The overall form tapers off towards the top and slopes away to one side. There aren’t any marks on any of the sheets of paper.

Reference to other artists works is accidental I think. I was reminded of Tatlin’s Monument to the Third International (and coincidentally Multi Module is exhibited in Glasgow at a time when many galleries across the city had given their programme over to the third outing of the Glasgow International or GI Festival). On getting home and looking at that famous photo of the Tatlin’s model for his unrealised building, it’s clear the two have little in common, but there is something about the way Multi Module slopes off to one side that is reminiscent of the earlier work. Wallace’s concern is to create a free-standing sculpture made entirely from an ordinarily non-sculptural material, and to create it in such a way that the whole thing can be disassembled and its constituent parts returned to their former state (paper stored flat in a ream; clips back in their boxes). As with Tatlin’s maquette, it could be seen as a model for a larger architectural-scale work.

The Scotland Street School Museum is a bit of a gem of a building in an area of Glasgow that is somewhat blighted by its near proximity to the inner city stretch of the M8 motorway. The museum’s façade looks out at the louvred walls of a recently erected multi-storey car park, described in a 2006 press release for its launch as “state-of-the-art”, but with little architectural merit. This kind of juxtaposition of architectural styles permeates Wallace’s gallery based sculptures. Multi Module’s wave forms can be seen as a direct reference to the curvy roofs and details of the contemporary riverside and quayside apartments that have sprung up in many British cities over the past ten years. And whilst not architectural in scale (Multi Module is big), its construction method is a kind of antidote to the more permanent effects architectural practice has on the city and city life.

Following on from Wallace’s first sculpture made in this fashion (‘Jet Blush’ exhibition, Art and Design Gallery, University of Hertfordshire, Hatfield, 2008), Multi Module’s means of construction suggests parallels with Kurt Schwitter’s Merzbau, growing and mutating over time, the most basic of artists materials deconstructed and then reconstructed into a new and increasing form at each new location. Where as Schwitters’ various constructions were an autobiographical record of his life, of events both everyday and world changing, Multi Module reflects Wallace’s current concerns with issues of sustainability and a need to make art that has as little environmental impact as possible. But whilst the aim to make a monumental sculpture that impacts as little as possible on the environment can be applauded, I think there is also a sense here of the artist just wanting to build a great big thing – a kind of morphic constructivist totem – and this means of sustainable construction lends the form some modern day magic, that spiritual magic that all totems and monoliths must summon for creators and viewers alike.

Artist based in London and part of Programmes development team at a-n. @spalmerama