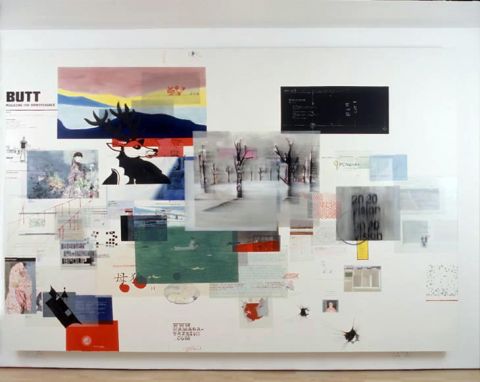 The following is an extract of artist Miltos Manetas' discussion with Sam Thorne (online editor of Frieze) on 2 April 2009, part of a series of talks related to the Altermodern Triennial Exhibition at Tate Britain.

The exhibition, curated by Nicolas Bourriaud, has been organised around the concept of art on the move, a wandering-type of art in a newly 'globalised' world.

According to Miltos Manetas artists of today do something which is "peculiar", creating a new type of art which reflects our times. Because of computers a new type of art has been produced which is almost surrealistic and a new type of artist who is different from anything we have seen before. On one hand there is the traditional artist who is both engaged with the physicality of canvas and paint, and with art history – an involvement which is passive/static – and on the other a new type of travelling/wandering artist who as yet has no place in contemporary art as there is nothing in terms of exhibitions, museums or the art market that engages with the concept of the web and internet-based art.

The art of the altermodern movement is strongly linked to the internet. Manetas argues that we are still at the beginning of our relationship with computer technology which is continuously developing. For example we should not think of computers in the form that they exist today, because as screens are moving into yet smaller entities computers may take on a very different form in the future.

Manetas reiterates the statement that art is dead, art is over, finished. Because of the internet, creativity is now a collective intellectual process involving the public itself. It is 'the people' that are now taking care of image manipulation. The real avant-garde, the tapping into new art is done by the public – this could be anybody who is doing the job that contemporary artists were doing before and this poses the question of what is the role of the artist today. We therefore need to reinvent the role of the artist.

However, related to this new type of non-static, non-spatial art, there are still the very traditional issues of art sales and copyright. Manetas explains that although copyright is currently the biggest issue in the art world, the content of art should not belong to the artists but to all people (not to companies): "in a world of visual images once something is put in front of me and I see it, it becomes part of my memory, part of my brain, so I should have the right to copy it" says Manetas.

On a more business-like approach he explains that when purchasing internet art the collector can actually buy the website. An original certificate can be given to certify that this website belongs to a certain person/collector and this certificate can also have the signature of the artist – because basically this is what collectors are buying – the signature…. Selling something which is completely immaterial means that the collector buys a relationship and a signature. As technology changes continuously (computers may soon become a thing of the past), the collector/buyer who purchases such work must ask for the right to emulate this work in another technology.

But although a defender of immaterial art such as internet art, Manetas is a painter who paints with paint and brushes on canvas, who creates an object/product with an estimated value available for sale in the art market. While he declares that everything should be free he also discusses the issue of exclusivity, sales and copyright. When confronted on his conflicting views Manetas says "the artist is like a homeless guy with no property but who enjoys vacations in the Bahamas ……"

MiltosManetas has become known for his internet paintings (Saatchi Gallery). He participated in Traffic, a show also curated by Nicolas Bourriaud in 1995. This summer Manetas will be presenting his work at the Venice Biennale's first ever internet pavilion.

Eva Pryce is an artist, art historian and associate lecturer at Wimbledon College of Art. She is the author of InvisibleTransformations in the work of Nikos Navridis ISBN 978-0-9557838-0-7