Blurring the Boundaries; is National Identity no longer relevant at the Venice Biennale? - a-n The Artists Information Company 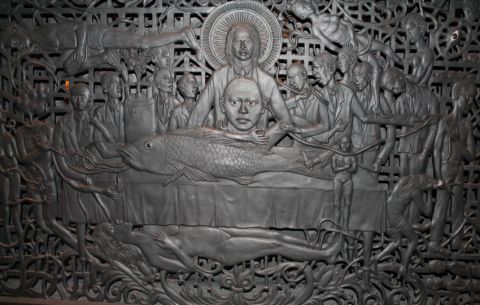 A recent article reviewing the Great Britain pavilion opens with this rather bold statement;

‘The notion that the work presented by each country at the Venice Biennale is somehow a reflection of its national identity is these days pretty defunct.’

Defunct or not, national identity remains a matter of controversy at the world’s oldest art show this year, which was curated with the title ‘Encyclopaedic Palace.’ While the article on Jeremy Deller’s work accuses the show of being a ‘state-funded celebration pumped with patriotic pride’, it also puts forward this idea that artists who dare to make work about their nationality are being too obvious, even if the work is trying to subvert traditionally held views.

If you are a regular visitor to Biennales and other international art fairs you will probably be familiar with the experience which I call ‘art cloning’ – an arty version of déjà vu. It might be a knowingly naïve painting, or a sculpture made of found objects, or perhaps a film of an abandoned post-industrial wasteland. Whatever the experience, the art clone is recognised by the fact it firstly appears to look very convincingly like a piece of contemporary art, before you can even figure out where it is from, or which artist made it.

I wonder whether this ‘art cloning’ relates to the changing attitude towards how artists deal with their nationality, and whether they even see it as significant. In this globally connected age, there is shared subject matter, fashionable mediums and contexts. There are artists who make the blurring of the boundaries and mix of cultural influences their signature and this year’s Biennale is no different in this regard. Yet even those artists who explicitly avoid the national identity theme can be read from a national-global perspective.

A whole spectrum of responses is on display from trumpeting or questioning national identity as a grand gesture, to completely rejecting it. There is the lightly-disguised political critique; for example the Russian pavilion, in which artist Vadim Zakharov invites visitors to genuflect along a kneeler to watch golden coins rain from the ceiling.

The 2013 Venice Biennale has 88 national participants, 10 countries are representing for the first time, a couple of nations switched pavilions, and some represent artists from other countries. This truly feels like a global event, much more so than the commercial art fairs such as Frieze.

The country pavilions range in size, proximity to the main exhibition, and budget. Inevitably, these factors create a sense of a hidden art world hierarchy. Countries that lay claim to being the most powerful in the art world such as Great Britain and USA are situated centrally in the Giardini. Whilst these countries might be considered important (i.e. at the top of the art food chain), they are by no means the nations receiving the most attention. You just have to look at the number of ways in which China is represented in this year’s Biennale from the official pavilion, to the ‘Voice of the Unseen’ independent curated exhibition, and then the Ai Wei Wei reappearance in several other places. Look at the attention surrounding the Iraq pavilion, for proof that nationality and how the artists choose to deal with it is still relevant.

Going to just a few of the smaller pavilions dotted around the Grand Canal, I also realised that in being away from the chaos of the Giardini and Arsenale has its own benefits. Although obviously being harder to find and thus receiving less visitors, the smaller shows have a certain kind of autonomy, and freedom to choose new spaces, rather than having to re-use the existing grand pavilion.

Those that triumph the most, use this potential disadvantage to their benefit, as for example Angola, whose artist installed the artworks on crates in a seemingly arbitrary way, without having to ‘dress’ the location. The artwork consisted of multiple prints of photographs taken by Edson Chagas, images of objects he had found on the streets of Luanda. These discarded fragments of an African town had been made beautiful by the artist, and were free to all visitors who wished to take a copy. Winning the Golden Lion award of the Biennale, the artwork reflects eloquently on themes that both are about a particular country and a particular place, and are universal.

Individually, artists showing in the main curated section at the Arsenale are also identified by their country of origin. Talking about her work she presents as part of the Encyclopedic Palace curated part of the Biennale, Andra Ursuta was very clear that her work is informed by growing up in Romanian:

‘I can’t escape who I am, and where I am from. No matter how long I live abroad I will always be a Romanian.’

The work she presented is a series of miniature rooms (dollhouse size), which recreated the house she grew up in.

The Indonesian exhibition which is at the far end of the Arsenale is entitled ‘Sakti’ a word of Indian origin meaning a strong creative energy, divine and indestructible often related to female mythical figures. The ‘Sakti’ catalogue introduction by Achille Bonito Oliva proposes the idea of the artist as nomad ‘neither idiomatic nor autarchic, but rather subjective and historically individual, to a language which is perforce and always international’. The piece goes on to suggest that art installations act like temporary ‘Houses of Art’, projections of their individual experience. In a further essay, Carla Bianpoen and Rifky Effendy suggest:

“The pavilion can be seen as a metaphor mirroring Indonesia’s culture of the present time: hybrid, syncretic and breaking through the borders of individual and social spaces.”

The Indonesian Experience in the Global context, by Carla Bianpoen and Rifky Effendy

The artist’s work is a fascinating, beautiful and at the same time an absurd mix of the mythical and real world, re-appropriating symbols of nationality, whilst echoing traditional crafts and materials. This piece is more than about just challenging of the cliché notion of national identity, yet this is clearly in there and part of what makes it so compelling.

If so many artists are tackling this issue in their work, why is dealing with such topics as national identity seen as ‘defunct’? In their book about contemporary art and nationalism, Sezgin Boynik and Minna L. Henriksson state that nationalism has become a ‘taboo’ subject in art.

Drawing a connection from contemporary art to nationalism is in many ways complicated and problematic. One of the main reasons lies in understandings of contemporary art as a practice that is subversive and critical, which questions mainstream ideas and conservative thoughts. In its fundamental definition, contemporary art of the 20th century (ranging from the avant-garde to conceptual art and up to the present) is assumed as an obvious negation of pre-described and fixed ideological formulations, of which nationalism becomes among the most visible examples…

…What we are proposing is the opposite; instead of seeing nationalism as a fossilized, slow, rude, unintelligent, and in non-dialectical solid ground, it is more useful to deal with nationalism as very contemporary movement, which can manifest itself even in the most progressive structures

At its best, art manages to confound our expectations even on traditionally accepted ideas such as national identity. Whilst some works seem cliché others tackle this theme with smart and thought provoking politics, humour and even at times a strange beauty. What more could you ask from an ‘Encyclopaedic Palace’?

Nicole Mollett practise includes drawing, socially engaged projects, and performance. Nicole is interested in public art and what happens when art is created outside of the gallery context. Having worked as a lead artist on several regeneration projects in Kent, she actively promotes a more democratic approach to commissioning public art. www.nicolemollett.co.uk @NicoleMollett