" CAN A NATION WELCOME ANOTHER NATION ?" - a-n The Artists Information Company 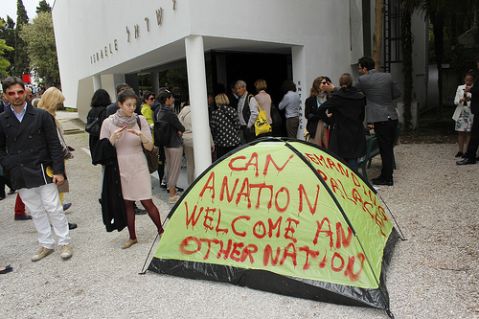 Somewhere at the back of my mind was the idea of meeting up with the Colonel a.k.a Thierry Geoffrey. I have been meeting up with the Colonel from time to time at Frieze, at Documenta, Manifesta and Venice, each time I catch him on the hop he is usually busy on a ‘critical run’* or ‘slow dancing’ I have also been following him online, through his blog and on facebook. This year at Venice I hadn’t been able to find him even though he had a clear invitation from the Maldives pavilion. And then on the vaporetto on the way back to the airport there he was exhausted and a sleep in the seat opposite me. I helped him carry his massive Emergency Room kit bag to departures and we agreed to skype in the following weeks.

The Colonel makes interventions and participatory performances, institutional critiques of the art world that reflect important socio-political and environmental issues. This year in Venice the Colonel has found himself and his movement ‘The Biennalist’s (33 followers and activists) embroiled in two pavilions; The Maldives and the pavilion of Zimbabwe. Climate change and the immediate risk of sea levels to the Maldives was the key point of focus. If the population of the Maldives were forced to migrate then this second question is being posed in the Mobile Emergency Room – ” CAN A NATION WELCOME ANOTHER NATION?”

The Colonel goes about his business by asking to borrow spaces from pavilions and relies on gift and sharing of spaces to stage interventions. The mobile emergency room is a dome tent daubed with specific questions – This year a curator; Christine Eyene, has researched and made contact with the Biennalist movement to take part of “process: immaterial proposal”, so the Mobile Emergency Room formed part of the Maldives Pavilion curated by Chamber of Public Secrets. Colonel seeks to transform “rigid exhibition spaces” into “elastic and generous exhibition spaces”. As the artist explains: “I will act like a space of generosity, a hunter for climate change Emergency and an art re-distributor”.

Moving forward the Colonel does not only make appearances at peak times on the art world calendar, he also attends each COP; Climate Change Conference and is busy planning COP19 in Warsaw. He is also returning to Venice in a month to work with The Zimbabwe Pavilion, which is organised by the National Gallery of Zimbabwe, in collaboration with the Ministry of Education, Sports, Arts and Culture. Partners are Culture Fund, the Swiss Embassy in Zimbabwe and the European Union with sponsorship from the Goethe Institute, the Zimbabwe German Society and Portnet.

*Critical Run is an Art Format to debate while running. A stimulating and sweating format. The Art Format Critical Run has been activated in 20 different countries with 76 different burning debates. 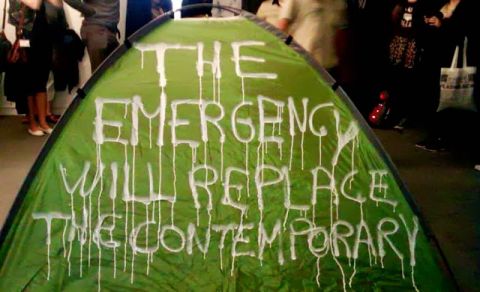 Nat Pitt is the curator of an artist led space in Worcester www.pittstudio.com