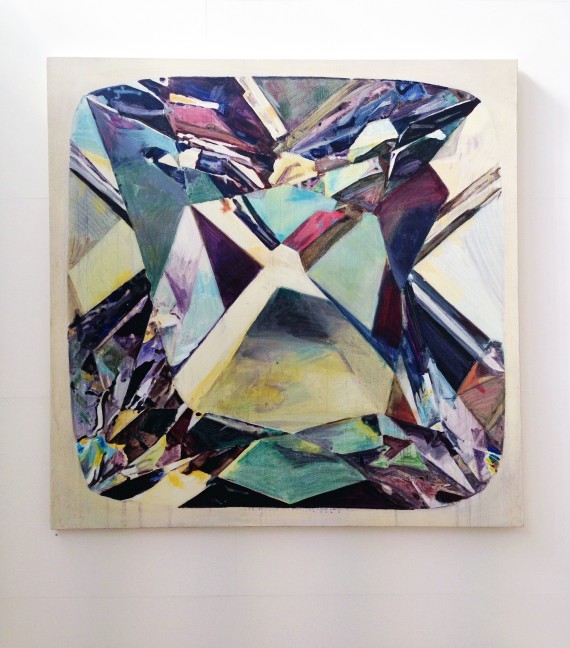 This is a review of Correspond, a group show by students on the Turps Correspondence Course. Due to the shifting environment of higher education it feels relevant to also consider the positioning of the exhibition as an alternative to university based arts education. In recent years the landscape of undergraduate and postgraduate experience has been vastly remodelled; studio space and individual contact time with academic staff in many institutions has depleted as tuition fees and cohort sizes have been dramatically raised. New models of education and professional development for artists are necessarily but too slowly emerging outside of the university model to provide a non-institutional space for creativity. The Turps Correspondence Course, and its studio-based equivalent, the Turps Art School, was founded in response to the growing concern for the future of painting tuition in the shifting climate of Higher Education. Conceived by the Editors of Turps Painting Magazine to be an artist led painting school, the Turps Correspondence Course offers painters the opportunity to develop their practice through a series of quarterly written appraisals from a dedicated mentor in response to work submitted online.

The Correspondence Course still follows, in part, a traditional art school model: a dedicated director of studies, support from practising artists, and critical feedback on presented work, albeit in a virtual capacity. It lacks the benefit of a physically defined peer network, but adds focus instead to in-depth individual development exclusive of the rest of the course cohort. One of the most significant way in which the Turps Correspondence Course challenges conventional art education is its lack of reliance on group teaching methods such as the ‘crit’, a type of formative assessment where student-artists physically present their work to gain critical responses from peers and tutors. The crit’s perceived strengths lie in the development of reflective practices, in offering students the experience of presenting to an audience, and contributing to peer learning.But there are also problems with such institutional practices, in which students are expected to ‘perform’, present work using an exclusive, learned academic language, and locate themselves unquestioningly at the bottom of a hierarchy of knowledge led by teaching staff. In his refreshingly honest ‘survival guide’ for students and tutors, Why Art Cannot be Taught (2001), James Elkins describes crits as, ‘like seductions, full of emotional outbursts’. He analyses confrontational critique dialogue and proposes that there can be a problem in the translation of the spoken language between a tutor and student, stating that ‘critiques are perilously close to total nonsense’. Considering the significance placed on physical exchanges such as the crit in art education there has been comparatively little research into developing alternative strategies. It is timely that The Turps Correspondence Course appears to be taking important steps towards establishing a progressive learning environment outside of some of the more problematic institutional conventions.

Correspond took place in the Turps Art School studio building in South East London, showing the work of 19 painters at the end of a year of their engagement with Turps Correspondence Course. The exhibition hang felt very conventional – but this was ultimately one of its strengths; presenting itself as a show purely about the paintings themselves, and not of their curation or the words of contextual theory surrounding them. The artists were each represented by a modest number of selected works that illustrated both the breadth of practice on the programme and the general level of competence, which on the whole provided strong competition for many other postgraduate painting shows.

Among the highlights for me were the works that appeared to articulate what painting, as an active, interrogatory discipline, offers to the process of a work’s development. Miranda Boulton uses graphite lines and washes of oil paint to navigate the space of the painting support. The resultant works express the tension between an image permanently in flux and one in a state of final resolution, with the decision making processes equally exposed and hidden in layers of suspended marks. The delicate formalism of Susan Preston’s work is generated through the subtle erasing and scraping of layers of paint, bringing separate elements of the composition into balance. Whereas Boulton’s work expresses openly the dynamism of its own making, Preston’s paintings have a much more static, poetic outcome. Negotiating the matter of balance in a more investigative way to Preston, Roisin Fogarty incorporates both rational and intuitive methods of working. She creates strict compositional structures on which to explore colour, tone, line and edge, all as seemingly flexible considerations despite the initial systems in place. Resolved well as individual pieces, Fogarty’s work nevertheless suggests a larger interrogation of the formal qualities of painting.

Painting more figuratively but still with a consideration of its material properties, Jules Clarke uses the fluidity of paint to describe the movement of one frame in a film to another, creating dreamlike images that appear to be played out in slow motion. Possessing an otherworldly quality, the image surface – showing the recreation of scenes taken from film or television – is gently disturbed by light daubs of paint. The world Clark portrays feels nostalgic, not just for the subject matter of home movies, Hollywood films and music videos, but because her disrupted images recall a time recently passed of pre-pixel analogue television snow. These are sombre images suggesting the fragility of memory and the ability of paint to render an ambiguous state of being, also present in Paula MacArthur’s large scale images of gem stones built up through layers of lightly tinted turps and intense colour. Made from a succession of wet, energetic glazes her paintings hold together as impressive compositions in their entirety, with areas of internal fragmentation suggestive of pure abstraction. The runs of colour, bleeding edges and vigorous drops of paint in MacArthur’s paintings are left on show, alluding to her working methods and succeeding in establishing a dynamic interplay between the organic and the man made, the instinctive and the premeditated.

Much of the work shown in Correspond focused on the pictorial; the sculptural, painted books of Natasha Morland and Katie Shipton’s physical manipulation of paint providing the only expanded negotiations of the discipline. In the context of other graduate art shows this was an initially surprising, but also largely pleasing focus on making, rather than redefining, painting.  If the works shown in Correspond are representative of what the Turps Correspondence Course can produce then it appears to be a serious alternative to an institutional experience at a time where, to quote its founders, “there is growing disquiet about the quality of painting tuition”. Rather than proposing a radical rethink of what painting could be, Correspond offered a serious contemplation of its merits and is a testament to why the tuition of painting – stripped back to its most rudimentary components of constructive feedback, time to reflect and the opportunity to disseminate the work made – should be back on the agenda of all our art schools.