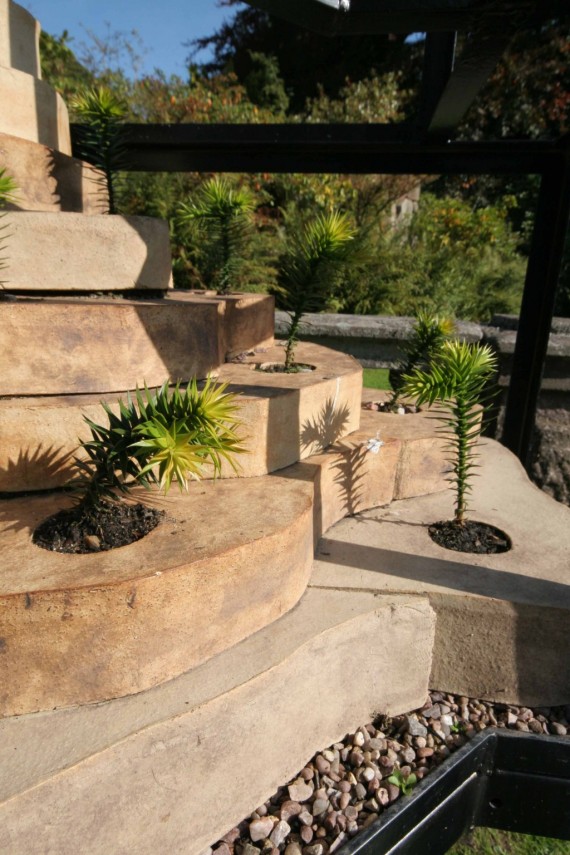 Standing on the edge of the lake in the formal Italian section of the garden, admiring the giant koi as they cut through the water before disappearing back into the murky depths, an English afternoon is suddenly interrupted by song, floating across the water from elsewhere; it is Rebecca Lee’s Song Sung When. At first listening the song sounds faintly familiar, a folk song misremembered? But as I move towards the sound the words reveal themselves to be something other than English, the effect of this and the other sound works in the collection, create a jolt – a rupture in the fabric of the day, throwing the listener into some other time and place, which feels ancient, other-worldly and at odds with the Englishness of a  day out with the National Trust.

The sound works presented here are selected field recordings from Nepal, Morocco, USA and Italy, and are presented alongside plants originating from these places, perhaps creating in the listener a similar sense of the exotic as would have been felt by those avid plant hunters, the Victorians – when setting out their collections of plants from all over the world, amidst the ordinariness of the English country garden.

This is James Bateman’s glorious Biddulph Grange; the design of the garden suggests a series of outdoor rooms or small countries, the effect of which is to make the site seem bigger than its 17 acres. The garden was designed in the period somewhere between Capability Brown’s large scale landscapes and the high Victorian period of garden design, which sought to accommodate the new craze for plant collecting from around the world. Bateman and his wife were avid plant collectors, and with the help of artist friend Edward William Cooke, the Biddulph Grange gardens were designed with their collection in mind.

A walk through reveals a series of pocket gardens, each reflecting the styles and landscaping features of other, far-away places – and indeed accommodating their plants too; conjuring ideas of the grand tour in miniature, where not just plants but architectural follies surprise the explorer (visitor). The idea of a Chinese Pagoda, over the hedge from an Egyptian Pyramid flanked by Sphinxes seems incongruous, and has something of the theme park about it, but it works here, since it is a theme park to nature. The excitement and thrill expressed through the design itself, may not be immediately obvious in today’s garden, but Bateman’s  passion is revealed through the artworks in Dangerous Discoveries, which seek to make visible the hidden and forgotten world of the plant hunter. In addition, the works draw our attention towards the understanding that comes with hindsight around the unchecked introduction of thousands of foreign species into the English Countryside, which the Victorians, men like Bateman, were responsible for. This obsessive importing of species grows ever more concerning, in particular in relation to some of the plants that are now known as invasive species by bodies like the Royal Horticultural Society, who describe these fast growing non-native species as problematic in the way that they:

“- Outcompete native species either by habitat change or by spreading so rapidly as to crowd out slower growing species, threatening the long-term survival of species.

-Take a long time to become invasive. Many of the plants now considered invasive have been growing in the UK for over 100 years and for much of that time showed no sign of becoming a problem.”[i]

A number of the artworks in the show deal directly with plants and Laura Youngson Coll’s exquisite orchid works seem to most closely reflect the shows title. The dangers of orchid collecting and hunting are well documented and these works refer directly to James Bateman’s horticultural credentials as a leading authority on tropical orchids, as set out in his book of 1843 Orchids of Mexico and Guatemala[ii]. The book reveals in some detail the little care for the terrible destruction of natural habitats across the world which was the result of the Victorian’s plant obsession; native species decimated in their homelands for the sake of the Victorian’s thirst for the strangest, rarest and most exotic of species. These intricate and beautiful artworks, through their display, look at first like simple botanical specimens; but on closer inspection reveal themselves to be something all together stranger. Made of vellum and hair sheep leather on top of an armature, the plants are beautiful but deadly looking objects of immaculate skill. In Grotesques Creatures, in particular, the artist has taken the already otherworldly orchid and created something akin to a plant and insect hybrid, a flowering of parasitic insects suggest a genetic modification turned mutant. Two of the artworks are found within the Shelter House, a grand architectural turret, overlooking the Dahlia Walk; a feature that was lost in history (during the Grange’s time as a hospital) but reinstated in recent years. The siting of the works here seem to bring the viewer a moment of pause – as the building brings the journey around the garden to a momentary stop – a chance to look back at where you have been. The final work in the series is hidden within the tunnels which lead to the Chinese Garden, the effect is to create a feeling in the viewer of something secret and precious, perhaps contraband. These are some of the works in the show that respond to the unique character of the garden, which is as much about hidden passages, routes and inside spaces, as an experience of the great outdoors.

In Sarah Tulloch’s Parallel Nature one such interior space is utilised, and the feeling of being moved from one place and time to another, which seems to recur as you move throughout the garden is extended by the invitation to stop for a moment in between Egypt and somewhere else. The video piece consists of a series of montages, which explore aspects of the garden in minute detail. The collection of images, sounds and photographs document the work which continues in the garden today and at times reveals the hidden world of micro-biology. This work takes the viewer from swamp land, to woodland glade and through to formal manicured landscape, perhaps reflecting the evolution of life in the garden. The experience of standing and watching the projected works in the tunnel close to Egypt gives a nod towards those awe inspiring scientists, the Ancient Egyptians. With this work the garden is experienced on an entirely different level, as a living, breathing ecosystem of organisms, the piece too, seems to place the gardener at the centre of this sensitive ecology, working hard to maintain the precarious balance.

If Tulloch’s piece requires the viewer to focus in, and uncovers the hidden and invisible micro world, the works of Katie and Rebecca Beinart highlight the physical architecture, responding to the gardens platforms and levels. At times the viewer is invited to move around to unexpected aspects, creating the feeling of experiencing the landscape almost from above. The four sculptures reference the Wardian Cases which were developed by Nathaniel Ward in 1830, which for the first time developed a way for plants to be transported across the world, surviving long sea crossings. [iii] That some of the sites for the sculptures are at odds with the preferred habitats of the plants housed within, directly responds to the difficulty of transporting plants to and from other places. In particular the case containing Hart’s tongue ferns, found on the grassed area by the geological gallery in full sun, has resulted in some quite sickly looking plants. It is well documented that Bateman himself was often frustrated by some species inability to adapt to the English climate, and no level of horticultural skill will coax a plant to survive and thrive in an unsuitable habitat.

The materials which the pieces are constructed from reference the key industries of North Staffordshire, steel and ceramic; and perhaps nod to the development of the gardens from the Bateman’s family money, made within the local coal and steel industry. The suggested geographies within the works request that the viewer stand back from the garden and provide a macro view of its design; suddenly an overview is achieved, as the viewer is placed in a position of omnipotent onlooker. The pieces shift the scale of the garden once more, and we are reminded that everything here is not natural, but designed.

The experience of moving around Biddulph Grange gardens creates an immersive feeling of being somewhere else, the walker can feel lost in the labyrinthine tunnels, walkways and interlocking rooms, the Beinart Sculptures, however, jolt the viewer back to the reality of constructed landscape, by providing the privileged view of the architect.

The artists in Dangerous Discoveries have responded to, excavated and revealed a fantastic jewel of a garden on many different levels. The Trust New Art series, which this exhibition is a part of,  is bringing a new arts audience to gardens and properties like this, but in addition, the artists are enabling new views of familiar places for frequent visitors, and uncovering new ways of uncovering the hidden histories within our heritage.

Anna Francis is an artist whose practice examines private histories, public space and civic languages; using forms of intervention, drawing, mapping, performance and consultation to investigate the impact that artists can have on their environments. She creates situations for herself, the public and other artists to explore places differently: often experimenting with leading and instruction by creating manuals, instructions, kits or leading guided tours. Anna's work often responds to gaps and glitches in public life, seeing these as opportunities to intervene, suggesting temporary solutions, which can, if others have the will, become permanent. Anna is a Director at AirSpace Gallery, Stoke-on-Trent's contemporary, artist led exhibiting space, where she has particular responsibility for the education and outreach programmes. Anna Francis is course leader on the BA Fine Art course at Staffordshire University. For more information and images of work please go to: http://www.annafrancis.blogspot.com