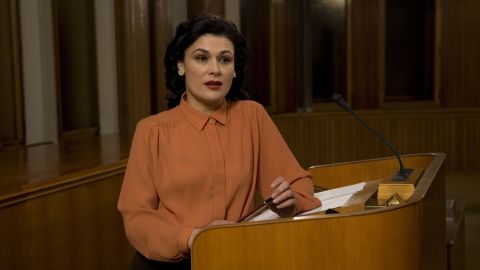 This digital record was found in the memory of a second hand iphone bought in Venice, Italy. What appears to be a conversation between four professionals has been left unedited and posted on interface so that this recent document not be lost as an archival record.

Paintings from the collection of the National Assembly

7th March 1958 in the People’s Assembly LRS in Lujbljana

Digital record of the review of artistic works and sculptures in the Slovenian Pavilion for the 55th Venice Biennale. After previous inspection of the artwork by artist/lead Jasmina Cibic, by artistic director/curator Tev? Logar, by artist/ journalist Pippa Koszerek and artist/architect Helen Stratford, and interviews conducted by Helen Stratford with artistic director/curator Tev? Logar and the artist/lead Jasmina Cibic, the following notes were assembled and the following resume made in relation to the artwork.

Pippa Koszerek: The wallpaper covering the interior of the Pavilion of Slovenia seduces, drawing the viewer into the space. On entering this Slovenian Cultural Centre I pass quickly through the main reception, only glimpsing the still life paintings that are hung high on one of the walls (after all, these are not part of the ‘real’ exhibition I imagine) and immediately am drawn into a smaller space where a projected film is the central focus in this intimate curved room. Booth-like in its feel, I sit on the built-in bench against the wall and watch a philosophical period drama unfurl. I am distracted though, by insects. I want to watch, to take in the conversation, to fully understand the importance of the debates I hear on screen, but I am in the midst of a beautiful, enticing invasion. Exquisitely drawn entomological illustrations of beetles fill the walls and ceilings around me. The black and white patterned wallpaper creates a sumptuous effect and I am drawn to touch it, immediately surprised that it isn’t a soft fabric but some kind of corrugated metal. I’ve been fooled by the neat folds to imagine I’m in a room encased by fabric. The aura of soft furnishings and decorative emblems belies the tightly controlled structures endemic to this all encompassing artwork; this haptic illusion.

Helen Stratford: I think the way you experience the pavilion is a reflection of its focus on the performativity of architecture. In my opinion, in the pavilion there is an inter-play between the viewer, the space and the performances being viewed. Architecture produces certain ways of behaving, yet requires movement and interaction with the body to be understood. Architect and Educator Doina Petrescu has a particular view of this inter-relationship, where buildings are perhaps better understood as “performative conditions” – “acting on us and activated by us.” Jasmina, people have written how you describe creating ‘mis-en-scenes’ in your work, which look at the structures of the exhibition itself. In this context it is less abut the performers in the films than the contexts and conditions of spatial knowledge production, the performative aspects of architecture and the architectural aspects of performance. It is about the positioning of the viewer and the spaces they are invited to take up in relation to the architecture.

Jasmina Cibic: I am interested in how architecture deals with the triad of display, the behavioural pattern of the user and the authority generated which directs one’s gaze. At the same time I am interested in spaces that speak about the promise of experience as a paraphrase of the exhibition space. The performativity of architecture starts happening in its own production. For the Biennale, I wanted to use the space itself. It is a repurposed private residence and it already provides many different relationships to the spectator and to display, beginning with the vitrine, the shop window. The space develops into a very private space which ends at the interior balcony.

For me, there has to be different levels of access to the work and the artist is the facilitator (something between a gatekeeper and an experience provider) who needs to create some sort of potential. I treat all artworks as props, they have to have a purpose and my works are like sets. In For Our Economy and Culture, the aim was to really guide the spectator through the space, before ending up in the most private space of the house.

Tev? Logar: The whole intervention in the pavilion is borrowing elements from state architect Vinko Glanz, that he was using for his state architecture. The Slovenian Pavilion is a private house which is re-articulated to a gallery. This already brings a specific code in the strategy of the exhibition. Already during previous projects in the Slovenian Pavilion, there was always the question of whether it was an appropriate space to represent the State.

Pippa Koszerek: My experience of the Pavilion is a very personal response to what is in effect an exhibition imbued with ideology. At once questioning the very fabric upon which ideologies are formed, assumed and performed and also fulfilling a very contemporaneous ideological need within certain groupoings of the art world to maintain a critical independence and question ones agency at every step. In order to participate it is a requirement to deconstruct ones surroundings.

Helen Stratford: I think the idea of the deconstruction of one’s surroundings is definitely critical, but I would say that this personal response is inevitably connected to what you describe as the fabric upon which ideologies are formed. For me, in the setting of the work and the themes of the films there is a focus on the now well-documented use of architecture in the ideological control of physical space for the representation and manipulation of power.

Of course, there are references to architecture in the rest of the Biennale. In the Arsenale there is the model of the Encyclopaedic Palace of the world by Marino Auriti, in the Giardini there are card models of houses by Peter Fritz and then of course there are the national pavilions of which Alfredo Jaar in the Chilean pavilion has made an entire model that rises out of the waters every three minutes – a real architectural performance! Here we are positioned as de Certeau’s omnipresent observer viewing from a vantage point afar or above and it’s more about the idea of a utopic representation than actually inhabiting a space.

In contrast, in the Slovenian Pavilion the reference is 1:1, one inhabits the architecture rather than look down upon it. Moreover, there is also an element of translation, which relates to what you described earlier as fake or trickery, I feel that there is also the idea of failure of the reproduction of spaces in the work – that things always get translated and in their repetition there are other citations that have a contemporary resonance.

Tev? Logar: We did not want to make a project that is directly addressing the issues of modernism which is very popular in contemporary art now. On the other hand, we wanted to bring out these ideological questions from the past, which are still being asked today.

Pippa Koszerek: Architect Vinko Glanz is the protagonist of Jasmina Cibic’s total artwork For Our Economy and Culture; a real life character re-enacted and portrayed in two stylised films that glamorize and somewhat romanticise the politics of decision-making and explore the constraints of state-sanctioned authorship through a discussion of his architectural theories.

In Fruits of Our Land, 1950s attired characters are archly debating what appear to be civic matters in a parliamentary plenary chamber. It becomes quickly apparent that the six characters – four men and two women – are debating the selection of an artwork and that there is a sense of relative urgency to come up with a solution. Juxtaposed with this debate is the silent scene of the six officials examining a white architectural scale model. This is a model of the Slovenian National Assembly in Ljubliana that was built by Glanz between 1954 and 1959. For this exhibition, the interior of Galleria A+A has been re-structured, to be a human-size scale model of the vast government building.

Helen Stratford: It’s interesting the discussion of the gap between what is intended and what is realised and that you focus on the glamorization and romanticism of the films. I think the problematic of re-presentation here is really interesting. The conversation in Fruits of Our Land is completely engaging but you are always aware that it is a re-enactment; it is clearly staged.

In fact, at first one thinks it is completely invented and then later realise that it is a transcript of a 1950’s meeting of the Slovenian Committee for the review of artistic works and sculptures, whose topics of discussion are startlingly relevant in the context of the Biennale with many pavilion’s focus on national identity, economy and wealth.

Pippa Koszerek: I think it’s more than re-enactment. I think there is also parodying at play. In Fruits of our Land, Glanz is one of many voicing his opinion, and we see him in a slightly parodied role. My question is, is the stenographic record real or also a script? But then when are minutes ever entirely accurate, what was omitted or edited in the transcription of this real life drama into a script?

Tev? Logar: There is no question of them being false, the scripts were found in a shopping trolley by a PhD researcher studying Glanz.

Jasmina Cibic: It’s a word for word description, I edited the names out, because I wanted to just leave the discourse and show how universal and how timeless it is. The artwork that was debated in the film was the only one that didn’t end up being in the parliament in the National Assembly Building. It had the title Fruits of Our Land and was supposed to have images of children carrying bird cages lanterns and old ladies selling lace and flowers. I mean, how more benign can you get! To me, there was this pure poetry about how a totally benign proposal can just fuel so much hatred.

Helen Stratford: For me, there is a definite play with the past and how it gets retold. Cultural Geographer, Tim Edensor has described how cities contain “traces of the past” that haunt the idealistic visions of the present. Cibic’s work makes visible that which has been consigned to the past or relegated to the unconscious – be it overlooked spaces or species.

Sociologist Avery Gordon has explored how the ghostly destabilizes the familiar while evoking shared histories; providing a different sort of knowledge of place that confounds settled orders of past and present. So for me, the sense of parody – the fact that we cannot be completely sure if what is being replayed ever actually happened – recasts our protagonist and his comrades as ghosts, whose presence brings into question notions of clearly separated realms of past and present; fact and fiction.

The transcript of this discussion is continued in Digital Record of the inspection for review of Jasmina Cibic’s For Our Economy and Culture Part 2: