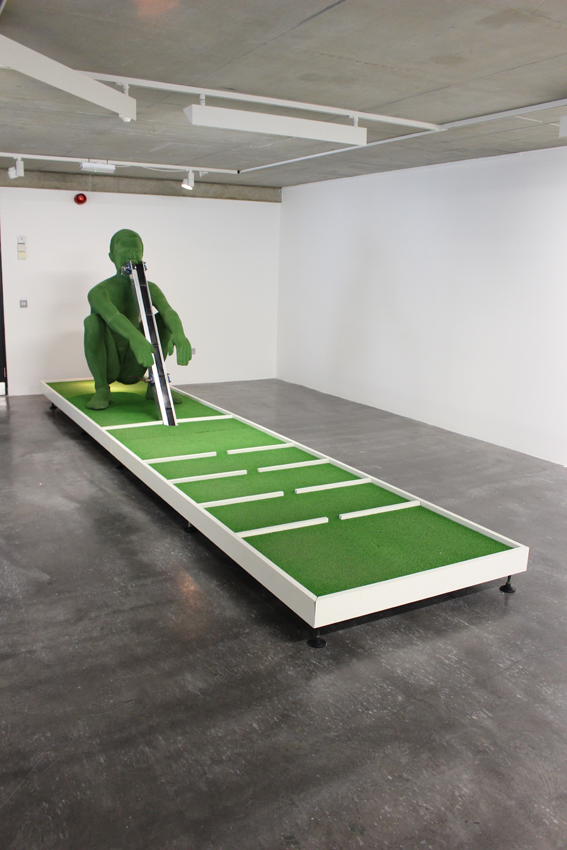 As an artist and parent, I spend a lot of time thinking about how art can function to both engage both myself, as a 50’s something artist and my 7 year old daughter. As a show Doug Fishbone’s ‘Leisure land golf’ offers up clear scope for this.

Approaching the show, I was fairly hopeful that Fishbone’s tried and tested subversive appropriation of crazy golf as a structure to explore the perversities of capitalism and inequalities (both within and between nation states) should also work to a certain degree.

Taking the working class version, of a game that epitomizes privileged leisured and adding a healthy dressing gritty realism, makes for a good starting recipe. Particularly looking at some of the names assigned a hole. In this project inequality is laid bare and in some ways made me think of Millet  ‘the gleaners’ painted way back in 1857 France.

The overarching concept and physical structure also eliminates the key pitfall of many group thematic shows, in essence the lack of flow and cohesion. This format deals with this in one fell swoop and this was quickly visually confirmed on entering the space. It hung well together. The next challenge then is how can the participating artists avoid predictability and potential cliché? The final challenge being how, when the basic format is a given, do the artists speak with their own creative voice?

Much of the work on show applies humour through a degree of visual absurdity, this works as an effective Trojan horse to deal with the many awful truths which are subsequently revealed. This is exemplified by the piece by John Akomfrah. A hoody wearing figure, kneels before an approaching golf ball in a passive position. The accompanying text reveals the same hoody was worn by a 17 year old African American, shot by a neighbourhood watch vigilant. It draws you in with a surreal daft edge, then leaves you with an uncomfortable revelation, redolent of some of Robert Gober’s seminal work. Yara El-Sherbini presents a series of check points and stark concrete barriers which restrict access for the player, rendering play useless, reminding us for many freedom of movement is not a given, not a choice, but more a quirk of fate or accident of birthplace.

Doug Fishbone’s contribution is a cartoon like model form of the sinking cruise liner, the Costa Concordia, it balances well the visually comedic with the stark tragedy of this strange event, and curious modern capitalist leisure pastime leisure.

Candice Jacobs applies her trade mark deconstruction of kitsch glitziness to create an artwork evocative of a 1980’s game show or Liberace set, complete with glistening palm tree forms. Indeed she is one of the few artists not to use the fake green stuff, whilst interrogating the fake-ness of consumerist desire.

Certain works move more into the territory of sculpture in terms of enhanced formal presence. For Yinke Shonibare to pull this off is no great surprise. His gift of interlacing the conceptual with the enticingly evocative and oft poetic is up there for me. His mushroom cloud of small footballs decorated with his signature batik motif is a delight. The allusions to power, territory and conflict all blended together perfectly.  Another who achieves this is Hetain Patel. I’ve enjoyed his lens based and live works for a number of years, but I didn’t have him down as a sculptural formalist. His conversion of the squatting Indian figure motif (emblematic of working and lower classes) into a large green fuzzy fur form, with a strange white mechanical golf ball shoot (placed between legs and feeding into the mouth), is as intriguing as it is bewitching. It occupies a fascinating territory between three artists, Erwin Wurm, Anthony Gormley, and Anish Kapoor. And like all three of their works, is both a feast for the eyes and food for the brain.

Ellie Harrison applies visual poetics, to understated good effect. A green, in the shape of the UK map offers sanctuary for the balls that cross the channel from Europe. The work is in many ways disarmingly prophetic of the way things have now shaped up in saddening complexities of the growing migrant crisis. Her resistance to over signification is to be applauded.

This project was put together by a consortium called EM15  a collective from the East Midlands region of the UK comprising of Beacon Art Project, One Thoresby Street, QUAD and New Art Exchange. As London moves ever closer towards being a separate economic and cultural entity, it is heartening that regional initiatives like this are working to assert that other creative parts of the UK exists in both a local and global sense.

Its initial launch at the Venice Biennale also makes sense with the overarching narrative. As when you compare say the small modest space of Mongolian Pavilion at the Palazzo Mora, with the main European national pavilions at The Giardini, you quickly realise that amongst the global art world, all is far from fair and square. Now situated amongst the economically challenged and culturally diverse district of Hyson Green in inner City Nottingham, the issues raised through the work are offered further social resonances and causes for reflection.