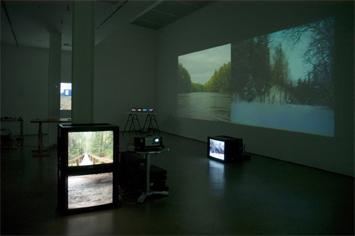 Every once in a while we encounter something in life that serves to disrupt what was previously considered ones normative structure of being. Something that presents a fundamental shift in our perception of the world around us, a world at once replete with inconsistency and the ephemeral yet one that is seemingly progressively becoming geared towards catering for and nurturing modern man's apparent inherent desire to attain some confounded level of contentment. Increasingly it appears an aspiration to assume a role of existential convienience that the contemporary western world is only too happy to accommodate.

It is perhaps axiomatic to state that artists strive to perpetually challenge these notions of congruity; however few go so far as to completely uproot every aspect in their lives that would begin to constitute some level of normality. Duncan Higgins is one such artist who has done just that in his travels to Solovki.

‘Northern Russia has been described as being shrouded in a rare serene stillness and beauty undermined by the decaying presence of evil. As I stepped off the plane on Solovki in December 2004 I experienced a sudden and significant shift in understanding about my cultural place in the world.' – Duncan Higgins

To question ones sense of place both geographically and culturally is surely to be deemed a most daunting prospect, the re-attainment of such an otherwise taken for granted disposition of comfortability demands a complete upheaval and disregard for all we have become accustomed to; a new mind set of intuitive exploration and visceral spatial orientation. This instinctive, exploratory notion of continual transience is represented both physically and conceptually in the near 700 oil paintings and 25 video works displayed in the inaugural ‘Site Platform' event at Sheffield's Site Gallery.

Within Higgins' work the allusion to narrative is omnipresent yet it is concurrently riddled with equivocacy and ambiguity. Although the references to film are overt in his paintings, Higgins seems to deploy an intentional negation of any sequentiality or linearity that might have once been present in what at first seems a narrative depiction. On closer inspection we can discern but a few actual sequences and little recurrent imagery, each tiny painting separated by nuances in colour, the hazy forms in some, shrouded by aphotic veils of night or austere white light from the winter sun.

Here we are made aware of the artists' conscious decisions regarding the inclusion and exclusion of what one would assume were images taken from frames of a film. Robert Scholes in his book Semiotics and Interpretation describes an exhortation of narrational input when he considers that, any discrete part of a filmic narrative like an individual scene, shot, or film still, presents a panoply of signifiers. The viewer actively seeks to complete the process of narration. In Higgins' paintings, as in the 25 video works shown in the conjoining room, a disruption of chronology is at work which invites the viewer to employ their own subjective narration.

Be it in the construction of combinations of the moving image or motionless pictorial representations of narrative moments in time, the viewer is urged to apply reason to the relatively desolate scenes depicted. One is left in search of a point of continuity or a moment of recognition, however when a trace of the familiar emerges we are confronted with uninhabited architecture with melancholic, disquieting undertones or scenes portraying Siberian communities that leave us looking in inquisitively at an alien world balanced on the threshold of reality and the fictitious.

What underpins Unloud as an exhibition is a complex and exciting notion of perception. The interpretive flux, the alternation between the subjective and objective, between video and painting, time and non-time, the acknowledgement of painting as durrational in production yet not a time based medium presents us with a continuum of personal cognitive challenges, an interplay between narration and narrativity in which nothing is ever settled. We are left to grasp hold of a story constructed of allusions that leaves us in a place of indeterminate temporal and narrative disorder in which concretization of the whole appears unattainable. When confronted with a work, shamelessly undisclosed and unresolved the viewer assumes an invigorating, empowered role where a myriad of potential narratives await completion.

I am an artist and writer living and working in the East of England. My interest in writing spurs from an enthusiasm for fiction and an insatiable passion for narrative in art and literature. My work both visual and textual rotates around narrative and the potential cross overs between the two within this discipline.