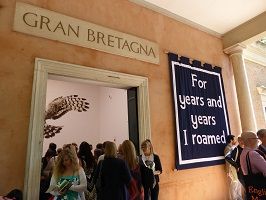 I’m walking through the Giardini on a sunny afternoon. The manicured turf and gravel is covered with the inhabitants of the art-world, sipping on Prosecco and forming queues at every turn. A Pavilion is opening every thirty minutes or so, but rather than follow this programme, I decide to visit the Jeremy Deller’s ‘English Magic’ exhibit at The British Pavilion before its official opening later in the day. This turns out to be good timing, because after walking through the doorway (flanked with banners made by Ed Hall and featuring song lyrics whose relevance will be made clear later), I realise that I have coincided my visit with that of members of the Melodians Steel Orchestra from South London.

The Melodians were commissioned and filmed by Deller performing a range of musical pieces in his latest film ‘Ooh-oo-hoo ah-ha ha yeah’, made at Abbey Road Studios, London on 18th March this year and shown here as part of ‘English Magic’, his commission from the British Council for the Venice Biennale. A large number of us cram into the (rather too small) room where the film is being shown on a flat screen monitor. Spontaneous applause bursts out at the end. The Orchestra members look pleased to be here and are enjoying the queries about their possible involvement in the later opening ceremony (they won’t tell). The film is a feast of High Definition – images from the installation of ‘Sacrilege’ last summer, slow-motion footage of birds of prey, Land Rovers being crushed – all given further momentum by the soundtrack provided by the Melodians. There are elements of the piece that loop time and place in a beautiful way – for example, the soundtrack has been pressed onto vinyl at an EMI plant in Hayes, where hand axes dating from 250,000-400,000 BCE were found. The hand axes are, of course, exhibited in the room with the film, above the doorways.

The shady rear gallery and terrace of the Pavilion have been dedicated to serving everyone free mugs of tea, Deller-style. This is a truly enjoyable and relaxed experience, the ceiling festooned with hanging plants of the type that your aunty would have had in her conservatory and the tea being poured from large tea urns suitable for any community activity. The tea-stop fuels a second circuit around the rooms of the Pavilion, to further explore the works created by Deller and his collaborators.

I find Room 3 has an emotional resonance that I wasn’t expecting. Comprised of a collection of colour and monochrome drawings by prisoners in the UK, many of whom are soldiers who served in Iraq and Afghanistan, they are portraits of people who have a connection to these conflicts. A large number of the drawings are of Dr David Kelly, the UN weapons inspector who killed himself after immense pressure from the UK press and government following his questioning of the report into Saddam Hussein’s weapons capability. There is a tender rawness in some of these drawings that underscores the juxtaposition of the real world with the art world setting of the Pavilion.

Room 2 ‘We sit starving amidst our gold’ presents a collection of objects and art works that explore a fictional narrative involving Roman Abramovich, who parked his yacht alongside the Giardini quay in 2011, restricting the use of the promenade during the Biennale. Deller presents the historical figure of socialist artist and designer William Morris, returning to life as a colossus, and throwing the yacht into the lagoon. The action is supplemented by the exhibition of certificates from the break-up of the Soviet Union, highlighting the source of much of the wealth of the present-day oligarchs. The room also features examples of Morris’s work, including wood blocks loaned by the William Morris Gallery in Waltham Forest. The playful yet dense path through these narratives and histories work well, with the historical objects and contemporary fictional painting generating a real sense of what Deller intended to be a personal museum of the nation’s history.

larger Room 1 display, which is a series of very large-scale wall paintings by Sarah Tynan and Stuart Sam Hughes. The scale of the paintings works well in the space, but somewhat overwhelmed the other exhibits on the walls, which include banners from a fictional future uprising against the tax haven of St Helier, Jeresy, and a selection of Neolithic hand axes and flint arrowheads from Europe, North America and the Sahara and Lower Palaeolithic hand axes from the London area.

Room 6 features a series of photographs arranged in a very formal manner, alongside a map of Britain showing where the images were taken. Deller has taken the timeline of the David Bowie tour of 1972-3 and created a parallel photographic timeline that depicts the political and economic unease of the time; civilians shot by British troops in Londonderry, industrial action and an IRA bombing campaign – the contextual issues of everyday existence in the UK from which Bowie’s counter-cultural tour offered young people a respite.

The exhibition notes describe how the work ‘reflects the artist’s interest in the diverse nature of British society and its broad cultural, socio-political and economic history. ‘English Magic’ visits and interprets particular events or moments from the past, present and imagined future, through which Jeremy Deller weaves a narrative thread’. There is a sense of respect for the real world, for real people, for grass-roots politics and community activity that Deller has successfully continued from previous projects and brought to the Biennale.

Deller himself has described this show as “wistfully aggressive”. The Guardian’s review of it yesterday calls it ‘a kind of dark companion piece to last year’s Olympics opening ceremony, but with anger and satire mingling with the fondness and celebration’.

The official opening later that afternoon underscores the sensibilities of the exhibition. The Melodians play their steel pans live on the entrance balcony, the music spreading gently across the Giardini, bringing smiles to the faces of those gathered at the bottom of the steps and making a few well-heeled toes tap as they queue for other Pavilions. No speeches from institutional figureheads; just lots of applause as Deller, in a bright pink hat, thanks the orchestra. Then the Prosecco flows… (well, it is the Biennale).

Visual artist based in Cornwall, UK. Recent graduate from MA in Fine Art: Contemporary Practice at Falmouth University. Winner of the Sandra Blow award 2013. Bursary recipient from an and Visual Arts South West.