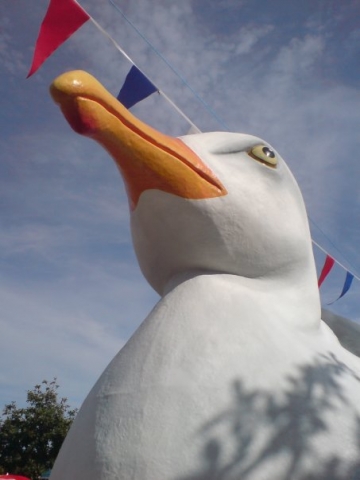 I didn't know much at all about Folkestone, its history or the current exhibition there until two weeks ago when my boyfriend and I, by chance saw a little coverage about it on the local news and our curiosity led us down there for a few days to check it out. I researched a little about what is in Folkestone before we left and it all looked pretty grim. I did start to wonder what we were thinking, choosing it as a holiday destination.

On our arrival we decided to take it easy and not rush around trying to see everything but instead get a feel for the town. My first impressions were pretty much what I expected, it seemed your average british seaside town which had had years of neglect and was fading fast. I saw the signs of art though. The posters, banners, and adverts in shop windows highlighted the event and assured me it was there, although I didn't really know what to look for (apart from maybe a giant sea gull)

We picked up a map from our hotel and scanned the details. It seemed laid out like a treasure map, with numbered references marking the locations and a small bit of text about the peice you would find. The very familiar names helped us decide which things we thought we wanted to make sure we would see. We had a rough idea of our route and set off…

We walked throughout the town hunting out the work, finding the Mark Dion sea gull first and chatting quite casually with the guy spending his days in and around it. We had alittle chat about the gulls, exchanged tales and then off we went. It was really quite surreal. We next came across one of the Tracey Emin pieces, a bronze baby's shoe. We stopped next to it and my first feelings were that I felt extremely ridiculous. All around us everyone was carrying on with their day at the beach, completely ignoring any art that might be about. My self-conciousness highlighted the nature of my visit. I came to look at this shoe yet the town was alive with human activity, kids playing, couples cuddling, teenagers speeding around on their bikes. It was such a contrast to the normal gallery setting. You couldn't help but watch the town and it's life as much as the pieces.

We walked on and commited ourselves to climbing up to a look out point to see Susan Philipsz's 'Pathetic Fallacy' (it is a recording of the artist singing 'Dolphins' within the shelter) We sat their alone looking down across the beach and harbour. A few people walked by and gave us some confused looks as they heard the singing. I think they thought it was coming from us. Watching the beach to this sound track ignited strange emotions, refletive ones I suppose.

We went back into the town centre, stopping for a drink and finding some more Tracey Emin pieces in a park. A middle aged couple helped us to find them. They lived in folkestone and commented on how they were surprised the pieces hadn't been stolen already, but although they talked negatively about the 'youths' in their town, I sensed that they held pride in their town hosting this exhibition. They delighted in helping us and really wanted us to enjoy our time there. They seemed to hold a new pride in the presence of the art and the new tourists it was bringing.

We explored the town into the early evening and felt a new excitement each time we discovered a new piece. The town and the work seemed to be unfolding itself, with side streets unexpectedly unveiling a new piece and a different idea about the place.

The following day our exploration of the town and the work continued. Many times we went wrong and couldn't find a particular piece that we were in search of but by doing this we would find a part of Folkestone that provided another alternative unexpected story about itself.

There was a lot of talk in reviews I have read since about whether this exhibition holds any benefits to the locals and how it will actually help the town to regenerate itself. I can't comment as a local, but as someone that had previously heard nothing about the place except negative comments, I felt moved by not just the work but the place. It was as though the work lured me to the town and introduced me to its secrets. We would never of gone there and even if we had we never would have explored it in such depth, walking from one corner to another, getting lost and climbing up to look-outs, admiring stray shoes and baby clothes laying deserted around the town with a back drop of reality with the young mums and babies passing us by and actually really noticing the vunerabilty of their position. It wasn't a romantic view of the town but an amalgumation of what has been, the harsh reality of it's neglect, what has been lost and I think, a hope. I thought each art work was incredibly well thought out and there was a subtlety that allowed Folkestone to emerge as something with a moving history and a hopeful future. My only concern would be that it tries to happen too quickly and manifacture itself in to a preconcieved idea instead of allowing a delicate natural growth and progression.

The triennial for me is an excellent start and I felt I came away with a feeling of hope and affection for somewhere that I a few days ago I wouldn't of given a second thought to.