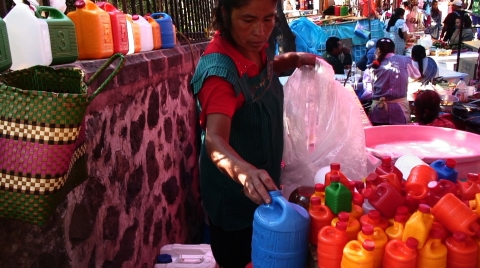 I finally got to visit Glasgow's GI Festival after a mix up with my ticket booking, albeit on the last weekend, knowing that I would only get to see a glimpse of the vast array of work on show all over Glasgow town.

My first stop was Catherine Yass's Hire Wire at the CCA, a multi-screen film and video installation that includes footage of Didier Pasquette traversing the high rise gap between tower blocks at Red Road in Glasgow. The large scale film projection of Didier's daredevil feat is mesmerizing in its bravado the scale of which is drawn by filming the vertiginous wire between the blocks and from this vantage point the height of the blocks can be experienced as if looking down from the top as he inches his way across the wire. The giant modernist blocks are beautiful from a distant viewing but get up close as the film does and it is clear they are brutal in their detailing, shabby and alienating in their isolated habitat, they are not meant to be seen from this vantage point. It seems as if Didier is trying to bridge an unbridgeable gap.

Catherine Yass' black and white lightboxes also give a sense of the starkness of the landscape. The tower blocks are like giant alien watchtowers guarding a space that makes for beautiful imagery even when stripped of its colour but that nobody would want to live in unless they had too. I thought I might be able to develop my line of thought on the fragility of this type of imagery by seeing Harold Turek's Hinterland but this exhibit was closed frustratingly, so I moved on to the Artists' Book Fair at the Glasgow Concert Hall.

This is the first time GI has hosted the book fair and I was a bit disappointed at the craft fair, hobby horse feel the venue had. With some new age style, twee offerings from some of the stalls and others offering information on book-binding, book-making, audio-books, letter-press books, antiquarian books, conceptual books on books as art, there were some quirkier stallholders like A shoal of Mackerel for example. With books like The Spilled Milk of Haunted Nations by Lina Persson and Tactical Magic by Marcus and Lari Lagerquist I could have spent all day alone with their publications. They also had a copy of Natalie Regard's Void Painting, 2005 a huge 480 x 800cm painting translated into a 7 kilo, 500 page book. I was surprised priced at under £50 how an edition of 500 could have been printed at all, but of course profit is no reason to make a work of art.

There were some other gems like Jayne Hyslop's Garden Map from Second Century Press and impressive sculptural books from Heather Hunt Book's Observer Series, 1950-1970 and I am sure a lot more in between that I just did not have time to see. That is the trouble with this type of event, a book takes time to read and digest and exploring its objecthood as an art object is all very well but also takes time and ingenuity for it to capture the imagination, especially with so much else competing for attention. One stall did manage to make me linger though and that was Zeynep Arman's research project on the relationship people have to the everyday objects in their lives. Her Imagine No Possessions takes a simple, uncomplicated yet philosophical look at how we attach meaning to our objects and how we tend to personify our environment. After taking a couple of her booklets I felt a bit more grounded amidst the thrall of information coming my way and headed off to see Jim Lambie's Forever Changes at GoMA.

It says in the exhibition guide that, ‘Lambie's work doesn't define itself against its predecessors, but draws its energy from an easy acknowledgement that art can both affect everyday experience and be shaped by it'. I thought he might be interested to know that someone tripped over one of his concrete archival floor pieces Sonic Reducer, 2008, as they were walking around the show. His disorientating vinyl floor The Strokes, 2008, certainly did its job even with the exhibition guides handing out strips of paper warning visitors about the potential hazard of the floor pieces. In his kitsch, pop style that sits nicely against the grand, columned ornateness of the GoMA gallery there are lots of optical and celestial references about the viewer's voyage through the visual. This is all surface stuff. Seven and Seven Is or Sunshine Bathed in Golden Glow, 2008 a collection of colourful chairs and mirrored bags arranged in a hickledy-pickledy fashion is in fact formed into a spectrum arc. Stars of Cancer, 2008, all mirrors and eyes is also quite orderly, put together to form the constellation of cancer. There are apparently no deep connections to be made here. With his Get Back, 2008, the viewer's way into the gallery is blocked by a multi-coloured fabric brick wall resting on two pairs of patent shoes, this show seems to me to be more about painting and its battle with modernist conceptualism.

Moving on to In Transit to see Dani Marti and Katri Walker's video installations I was stopped in my tracks by Marti's David, 2007, a powerful, poignant portrait of a homeless teenager on the streets of Glasgow. This was manipulative subject matter I know, with the lens centered unremittingly on the teenagers face, his eyes drifting in and out of consciousness while he holds a chewed begging cup. I felt like I do when I walk past the homeless begging on the street only this time from a safe distance where I could indulge my sympathy.

Testing the documentary genre's power to tell the ‘truth' the next film Aguamiel, 2008 by Walker again explored the idea of shifting consciousness but this time in a more hallucinogenic way. The viewer is told the story of a small, Mexican community making and selling a fermented cactus juice pulque for their living. They tell us a convincing lie that it is good healthy tipple that will enhance the libido and the psychedelically coloured containers on the market stall where it is sold give some hint as to its chemical properties.

The next film Under the Coolabah Tree, 2008 by Marti was a riot of funny dialogue about art and celebrity, lesbians and Osama bin Laden between the artist, a painter and an electrician stranded out in the Australian outback. It has a strong Beckettian feel to it with the isolation of the characters heightening the subjectivity of the viewer and comic touches that put their artistic aspirations into perspective. One minute they are arguing over who makes the tea and the next discussing the beauty of the light bouncing of the cloud formations. I bet they would be great fun down the pub.

The mastery of the lens over its subject is further tested in Walker's Señor Celestino on the Edge of Heaven, 2008, a moving portrait of a man's faith. Celestino has been commissioned by God to build a church and while at first such a grand, crazy scheme seems absurd, when he challenges the film maker on who is the better artist, it is difficult not to want to reward his life long commitment. His unwillingness to be passively observed and judged by the lens gives him a power that one almost believes comes from God himself. He says at some point that those who do not acknowledge the power of the father cannot be artists, or something like that, and I think, in the Lacanian sense, he is right. 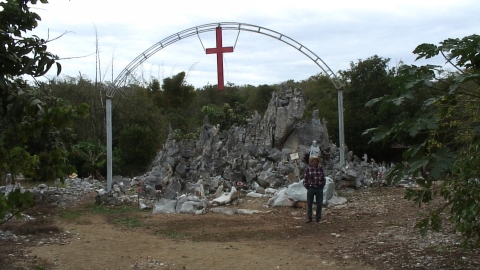