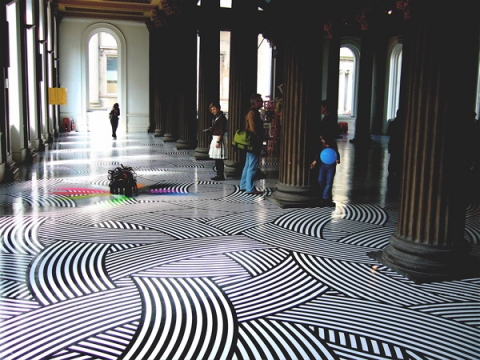 Glasgow International was founded in 2004 and this year’s incarnation offers a theme that is loosely described by director Francis McKee as ‘public and private’. The project has slowly expanded to 40 exhibitions, occupying not only established venues such as Glasgow’s Gallery of Modern Art but more remote artists studios and derelict buildings across the city. The ambitious magnitude of such projects can be daunting to both curator and viewer. One can feel disorientated with so much on offer, but this is part of the fun of such biennials.

Such sensory overload is perhaps best encapsulated by Jim Lambie’s Forever Changes at the Gallery of Modern Art. His floor installations, such as the monochrome one exhibited here, are made from sheets and strips of adhesive vinyl. In a sense I found this problematic and quite tentative. Produced to the specific dimensions of the gallery they do interfere with the large columns and ornate ceilings. The easy reversibility of such changes is interesting in itself but I personally wouldn’t have minded Lambie screwing up the space a bit more.

Asking For It at Glasgow School of Art, a group exhibition curated by Pi Li and Colin Chinnery, is the first large-scale group exhibition of contemporary Chinese art in Scotland. Forget about Terracotta Warriors, this show explores how strangely intimate and humorous everyday life in China today actually is. Common human traits such as boredom, neurosis, obsessions, memories and fantasies are played out in a way that breathes familiarity. Cultural stereotypes are confronted whilst the artists’ idiosyncrasies connect with our own, regardless of where they have come from. A vibrant show it successfully opens up the critical dialogue between the cities of Glasgow and Beijing.

The bridging of cultural divides manifests itself quite literally in High Wire, Catherine’s Yass’ video installation at the Centre for Contemporary Arts (CCA). The high wire artist Didier Pasquette is filmed from four different points of view as he attempts a 150 foot-long walk across a cable positioned 265 feet up across three high-rise blocks in Glasgow’s Red Road housing development. Yass’s installation choreographs the resulting footage into an artwork the spatial and temporal characteristics of which have palpable effects on the body of the viewer. Trust me, this is not a nice experience. At one point, Pasquette loses his balance, either due to increased wind or a tensioning of the cable. The resulting abortion raises questions on certainty and chance, power and control. An interesting sub-plot to High Wire is that it was funded by no less than 8 different sponsors. With so much invested interest would we still be watching the video had Pasquette fallen?

Of the work at Glasgow International, Wilhelm Sasnal’s The Other Church is perhaps the most hard-hitting. The video, presented in a disused warehouse on Osborne Street, documents two performances of a song written about the death of Angelika Kluk, a student from Krakow who was raped and murdered before being buried under floorboards at St Patricks Church in Anderston in 2006. The first performance is sung by Martin Pryt of the Polish punk band 19 Wiosen from Lodz, the second by an unnamed naked actress. A poignant statement, Sasnal has successfully merged site context with strong visuals, the film forcing you to question your own response to these tragic events. The viewer is placed in the position of voyeur, implicating us in the role of predator as much as observer. The contrast between the elegant journey of the mundane offered by Pi Li and Colin Chinnery at Glasgow School of Art and this brutal example of the darker side of reality illustrates the festivals strength. It encapsulates the diversity offered by Glasgow International and re-affirms its vitality for the future.