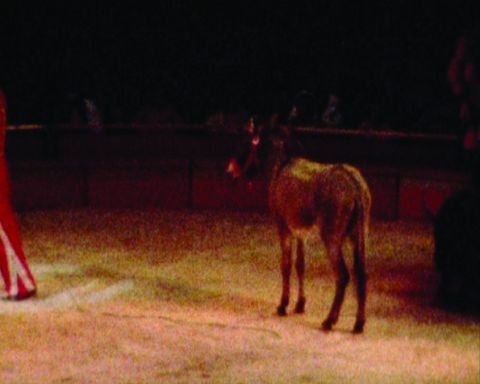 I was in Sheffield on Thursday and I called into Site Gallery to see Haris Epaminonda’s exhibition which runs there until 21st August 2010.

This is her first solo exhibition in a UK independent gallery, and features a newly commissioned video work from the Cypriot born artist. Haris Epaminonda is also currently showing new work at Tate Modern (29 May – 30 August).

According to the Press Release “Epaminonda works in a variety of media from collage to film, installation and book works. Often in her work there is a collapsing of time and space, folds of time exist in both her videos and collages, decisive cuts bringing together different parallel worlds and times.”

The gallery at first appeared empty apart from four projections and some ambient sound. I became lulled by the half light and soon began to realise that the projections were films. The artist re-presents images almost as though they have been found. I began to enter into a state of reflection and half-remembered experiences started to drift into conciousness. I felt as though I was walking through my own mind, catching glimpses of events that had been filed away for future reference. There was a sense of the mesmeric. The soundtrack enabled me to focus on aspects of performance, it was at the same time related and unrelated to the movement in the films which had a feel of home movies, whilst at the same time demonstrating the skill of the film-maker. The films here are digital video transferred from super8 film. The music was commissioned by the artist from ‘Part Wild Horses Mane On Both Sides’ who can be found on myspace.

In the second gallery space a piece featuring a circus performance was shown in a completely darkened space. I was aware of the scale of the room, and also of the fact that the film took up only a small part of the wall space, hovering in the darkness, flickeringly showing the performers skills from today, yesterday or yester year.

What I liked about the work was that the images had a randomness about them. There were key signifiers, I have been to a circus, I have noticed dust floating from car wheels, I have seen images of ancient ruins, I have been to desolate places with palm trees. These were not my memories but I felt absorbed by them, as though they were my own, half-remembered.

I would highly recommend a visit to Site Gallery in Sheffield to experience this exhibition. Allow at least 45 mins to really begin to appreciate the work.

The Press Release sums it up well:

“Walter Benjamin said that “history breaks down into images, not into stories” and Epaminonda’s work similarly avoids narrative – the artist suggests that it should not be read for cultural or historical significance, but simply for how the images resonate together. Yet despite the diverse nature of the works, the disparate images, viewed together, inevitably draw us to form a narrative, based on our own associations.

In one work a series of objects, a mix of artefacts from non-specific ancient cultures, are positioned on coloured background and filmed. The objects appear as still lives, but are subtly animated as the fluctuating light of the sun creates an animistic shadow. The objects are uncategorised, but linked by being repositories of time and history each with an untold story. In the context of an adjacent projection which centres around scenes from the Acropolis and Pompeii, they become like micro monuments to time. The still lives are then replaced by the pages of a book containing narrative illustrations, including of foundation myths such as the Garden of Eden. In contrast, the second film focuses on a classical civilisation which is in a state of entropy or decay. Like the still lives, this second film often seems to be a still landscape, but is animated by the fluctuating light of the sun which lends different dramatic effects, and by the occasional tiny moving figures or animals in the landscape, documents to time passing, as the title of the exhibition – Chronicles – suggests.

In another film, the only action to be seen is the slight movement of a tree caused by the wind – again a natural element is the prime mover in an otherwise still scene. This series of films have much less editing than previous works which montaged and manipulated found and new footage. The editing here is in the selection of the scene to be filmed which is then left mostly unedited, lending a more observational feel, but an element of chance is allowed to enter in terms of the subtle fluctuations in natural conditions. The sound accompanying the work, (produced for the exhibition by musicians ‘Part Wild Horses Mane On Both Sides’) also focuses on natural sounds, manipulated and melded with haunting instrumentation.

In another film there is a specific action – a car drags an olive tree along a landscape, watched by a pack of feral dogs – but still no narrative as the purpose for this action is hard to grasp. The car circles like the animals in the circus ring in another film, with a similar lack of visible motive. The looped films extend this circling of time indefinitely. In the smaller gallery the film depicts a circus including performing animals. The timeless nature of the richly coloured costumes and the fact that such entertainment is now outlawed in many countries gives the film an archaic feel, whilst the staging in some cases looks futuristic, placing the film, which is both beautiful and deeply melancholic, in an indeterminate time zone.

The works are all filmed on super 8 film, which renders the time of their capture uncertain. Archaic in feel, they also sometimes seem contemporaneous so the events depicted cannot be pinned down to a particular time – they seem to inhabit a different type of time, not present or past but somehow parallel to our own time. Film also inevitably instils a degree of fragility and melancholy due to the indexical nature of the photographic medium, the fact that that moment cannot be captured again. The visibly moving grain in the image also offers a particular texture and a kind of internal animation which emphasises the fact that these are still frames animated, highlighting the chronicling of instances of time which unites the works.”

Site Gallery has commisssioned a new text from Denise Robinson to accompany the exhibition (available to download from www.sitegallery.org).

Denise Robinson is an independent curator and writer and previously Head of Artistic Programme at Arnolﬁni and Visiting Fellow for Historical and Cultural Studies at Goldsmiths College and Visiting Fellow at Tate Britain. Denise curated the Cyprus Pavilion at the Venice Biennale in 2007.