Inside the Physical - a-n The Artists Information Company 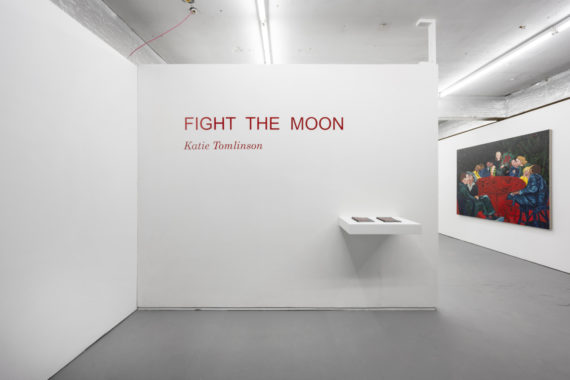 “You’ve got to learn to leave the table
When love’s no longer being served
To show everybody that you’re able
To leave without saying a word.” – Nina Simone

Nina Simone’s “You’ve got to learn” (1965) reminds us that ‘new beginnings’ are possible and sometimes essential. Simone empowers us to remove ourselves from difficulty when love is no longer being served. She communicates the strength we all have within us to leave a situation, both in silence and in the knowledge that our actions will be understood in time.

Like Simone, Tomlinson’s paintings appeal to the united experiences of womxn, giving visual form to encounters, observations and memories from her own life experience. Although playful and humorous at first glance, the work unfolds to reveal dark and troubling undertones loaded with complex questions and narratives. Exploring vulnerability, emotional dependency and power structures associated with patriarchy, Tomlinson’s paintings penetrate our optical field with charged messages, in work that is unequivocally present and demands our engagement.

The act of painting itself is characterised by an unrivalled relationship between maker and surface, where each painted mark records the psychological energy of the painter. In this way, painting speaks about identity and experience without even trying – emotional content is folded into each record of the brush. 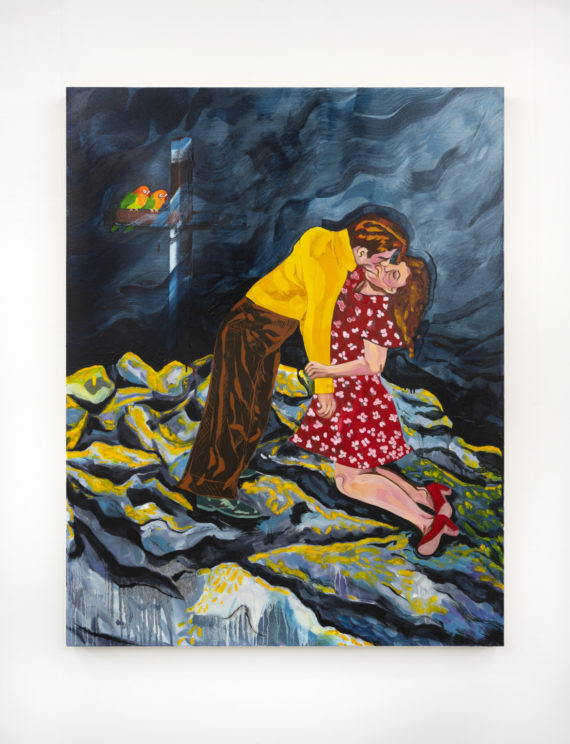 In the case of Tomlinson’s paintings, psychologically driven content is coupled with a highly attended surface, a reminder that these are indeed paintings we’re looking at. ‘Tearing me down tearing you down’ encapsulates this dualism, where the subject matter depicted and the means of production occupy the same experience of looking. Heightened by an intensely weighted palette and a direct application of paint, the psychology of the painting is wrapped up in its physical beingness. Located within a rocky landscape, a masculine and feminine character have become crutches for one another. She’s propping him up with her mouth, pushing through the lips and chin, and he’s rooted, albeit precariously, in a superficial token of stability, anchored through his legs and feet. For years they’ve struggled to get here, and yet ‘here’ is far from the idyllic and comfortable life they’d hoped for at the start. It’s a somewhat hellish place; a mountainside strewn in abjection, using the gluttonous yellow of his shirt like a dog marking its territory; a drab relationship characterised by formality and superficial neediness; and a dark and lonely place overshadowed by waning belief (symbolised by an obscured cross), where ‘love’ resides in the onlooking birds, not with the people.

Co-dependent, the couple are physically connected in a bacon-esque style facial embrace – “2 Become 1” sang the Spice Girls (1996), but not like this. Sadly, one is a burden for the other, yet neither is willing to move for fear of individual or conjoint collapse. Nice clothes, haircuts, shoes and complexions are all well and good, but they don’t provide happy hearts and minds – we all know this in our souls. 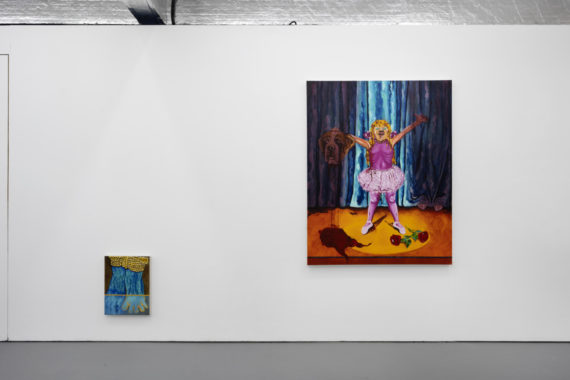 Like other paintings included in this exhibition, the subjects in ‘Tearing me down tearing you down’ are arrested in a moment of trauma, where we become voyeurs whether we like it or not. Take ‘Kathleen with the Head of Spike’, depicting Tomlinson’s recurring motif or alter ego holding the severed head of a massive hound (a reference to Judith’s beheading of Holofernes). Not only is this a truly disturbing sight to behold, it presents a hyper representation of femininity as a symbol of patriarchy in itself. In this painting, just as in ‘At Least buy me Dinner First’, where we’re watching people dogging, we are coerced into confronting the darker sides of our own thoughts, associations and behaviours. 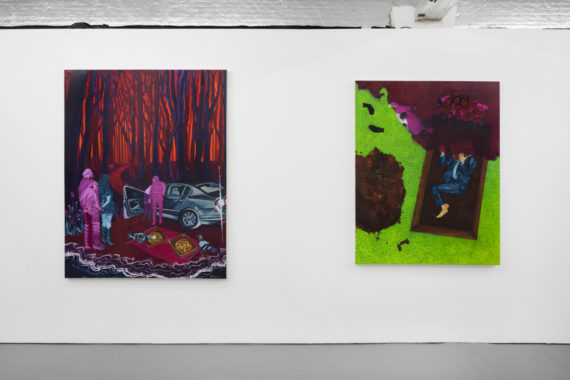 Tomlinson is clearly fascinated by the murky push and pull of relationships, provoking discussion about the ‘who’, ‘what’ and ‘why’ of the scenarios she paints. She may not recreate absolute experiences per se, but the work starts somewhere near lived experience and develops through the process of making a painting. In this sense, ‘life’ influences a painting’s trajectory with painted things standing in for real things at all levels of conscious and personal cognition – paintings often embody truths even the painter isn’t entirely privy to.

It could be said that painting is at its most personal during the making stage, when people, places and experiences are conjured in the encounter between idea, material and surface, and when the artist is closest to the work and lives each decision in the moment. In a conversation between poet Eileen Myles and painter Amy Sillman, Myles stuck their neck out suggesting Amy’s book Faux Pas was ‘not personal’ (Dent, 2021). Surprised by this, Amy responded saying she thought it was “really personal”, but that her writing could also act as a “deflector shield / reflector shield” across what she might be really thinking or doing, i.e. over what could be truly personal for the artist. In this way, the maker is at liberty to conceal ‘the personal’ in how they render content; the painter has licence to position, distance or package ‘the personal’ within pictorial space. 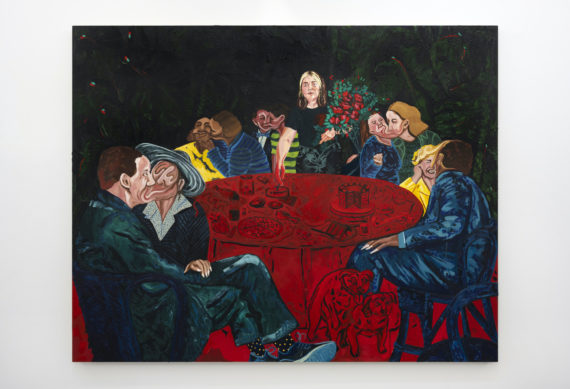 In Tomlinson’s painting ‘Learn to Leave the Table’, personal thought has been networked into materiality, withfigures around the table devouring each other in acts of cannibalism or enclosed in a series of transmutations. Graphically rendered like liquids or fabrics, their identities are lost or diminishing, leaving only their clothing as points of reference.

The standing figure in the painting is closer to a conventional self-portrait – she’s different to the rest, the strongest of the bunch, and it’s with her we share this moment. Directed up her robotic arm to a dabbed bouquet, we are taken from cigarette stubbing redness to a gesture of reflection in ‘the finger’. A painting of the artist herself, the protagonist’s gaze is deadpan, stoic, straight-talking, saying everything and nothing, and penetrating the picture plane into ‘our space’. Reminiscent of Bertolt Brecht’s ‘epic theatre’, a theatrical strategy of interest to Tomlinson, the protagonist’s address envelopes the audience with the notion that this ‘painted reality’ is just as fabricated as our own (Silberman, Giles & Kuhn, 2014). Here now, but leaving soon, Tomlinson wants us to witness both her acknowledgment and disapproval of the scenario around her, to go forth and change what we need to in our own lives as critical participants of this world.

Across the painting, other narratives unfold in this grotesque and theatrical loop; the canary yellow character to the right cringes as they’re tongued in unwanted proximity; camouflaged in redness, the ‘dogs dog’ and morph beneath the table, one panting and the other waiting for everything to be over; and two characters in the foreground show us the nails they’re likely hiding from their partners, through various twisting actions of the body or the head. In fact, hands are involved in a multitude of activities in this painting; they’re holding, gripping, fending off, pulling at flesh, dragging, curled in, even held out in trauma, disgust or anxiety. They’re also missing in many cases, trapped, squashed, sat upon or out of sight, leaving mainly upper bodies and faces to tell the story.

Constructed in sequence like a musical passage, the colours in the painting call to mind Van Gogh’s The Night Café or Matisse’s L’Atelier Rouge, especially in the monochromatic table of paraphernalia. No accident, there is meaning in every compositional decision Tomlinson makes, from her narrative arrangement of images in an original collage, to her preference for atemporality in her multifarious references to art history. 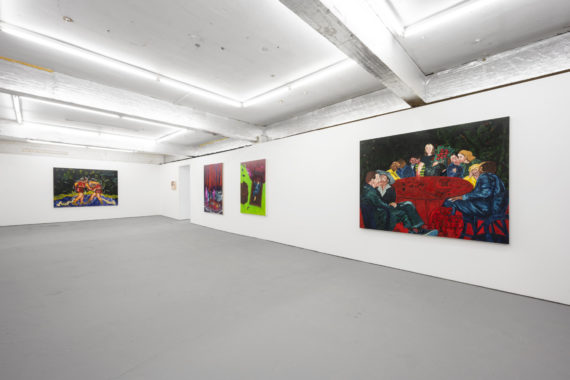 Indeed, Tomlinson’s paintings are positioned against a complex history of figuration, dominated by persistent male activity and interpretations of the human figure. The particularly turbulent story of figuration over the past century adds to this landscape, in its reduction through the 20th Century, revival through neo-expressionism, demise through postmodernism and resurgence since the millennium. And whilst womxn have contributed more to the dialogue in recent decades, their voices are only beginning to be consistently represented, credit to seminal exhibitions like Radical Figures at the Whitechapel and Mixing it up at the Hayward.

Finding her own way through picture making, Tomlinson admires painters like Michael Armitage, Dana Schutz and Nicole Eisenmann who advocate change and a progressive social future for painting. Thus, like these painters, Tomlinson’s paintings redress the patriarchal canon of art history through a reconsideration of subject, position and context.

Also admired by Tomlinson, contemporary South African painter Lisa Brice is similarly committed to reshaping our relationship with the figure in art, in relation to modernist figurative painters and through her distinct use of colour. In what could now be referred to as ‘Lisa Brice Blue’, not ‘Yves Klein Blue – the latter besieged with problems of power and control – Brice explores womxn as central agents in painting, using ‘her’ blue to “discourage an easy ‘read’ of the female form” (Stephen Friedman Gallery, 2021).

Like Brice, Tomlinson promotes critical engagement with the problems of patriarchal convention. The battle is real, it’s happening now, and it’s in full flow, but like fighting the moon, it feels like an absurd and impossible task. However, if we use the physicality of painting to get to the psychology of existence (as we did back in the caves), and we bring the moon down to earth by believing the impossible is possible, the battle will be won and it will be painting, once again, that reminds us we are real and equal actants in this world. 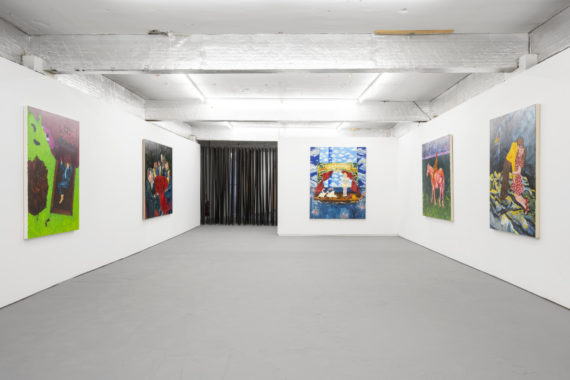 Jenny Eden is a painter, writer and lecturer based in Salford. She lectures in Fine Art Painting at Manchester School of Art and co-runs Oceans Apart, a gallery in Salford dedicated to contemporary painting.