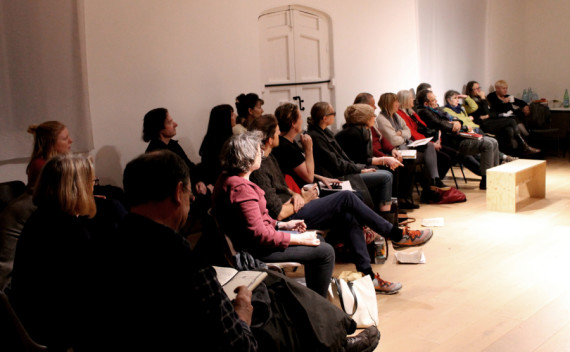 What lies hidden in a place? And how do we engage with it? These were the questions that first entered my mind when I read of OSR’s seminar, ‘Invisible Landscapes’, held early in December 2015 at their Project Space in West Coker, Somerset. Attended by 52, it was completely sold out indicating that many others were attracted to the theme. We were not disappointed; the event ran brilliantly, presenting three fascinating speakers and a choice of workshops, a visit to the atmospheric Dawes’ Twineworks culminating in a closing summing up.

My attraction to the seminar lies in my exploration of the ‘palimpsest of place’ through a series of projects begun in 2003, culminating in the most recent, ‘Goonhilly Village Green’, held on Goonhilly Downs, near Helston, Cornwall in September 2015. I am fascinated by the stories held in places, particularly those deemed redundant, derelict or of little immediate appeal. Scratching the surface will always reveal something of its former uses and users, whether found through archaeological research, recorded in archives, or held in a person’s memories. Tapping into these ‘bodies of knowledge’ enables me to work with a wide spectrum of collaborators, from professionals to local residents. I had high expectations of the day and was delighted to have been a participant.

Described as a ‘one day seminar exploring embedded approaches to place based contemporary art practices,’ the event presented a wide ranging examination of the ways artists and others engage with place. First up was Sally Watkins, a Co-Director of b-side festival, held biennially in Dorset. She introduced us to the history of the festival, which was piloted in 2008 as a cultural element of the sailing Olympics in Weymouth. Set up by Alan Rogers in 2007, the festival became a NPO of Arts Council England in 2012. The six person team all work part time and are active as independent artists, bringing a range of experiences to the event, essential as it relies on an open call to artists to submit site responsive proposals and an extensive body of volunteers to help deliver the projects. Since 2014, they have concentrated their efforts on Portland, an island connected to the mainland by a causewayed road. The town and island have distinctive histories and stories to tell, generating complex and involved responses from artists.

Watkins sees the festival as the means to collect and present disparate ideas about what makes Portland what it is, posing the question ‘Why does a single place generate such a range of responses?’ For me, this lies in the layers of time every place holds, from the geological to the personal, revealing rich seams to mine for inspiration. The other key element of the Festival is how the work will engage audiences, whether residents or visitors; b-side works hard to ensure people can experience the work. Selected artists need to address this in their proposals but do not necessarily have to have a socially engaged practice. This is where the volunteers often help, as they are briefed and prepared when taking visitors around the sites. Watkins stressed the need for negotiation with local communities to access places and specialist institutions such as churches or the prisons on the island. This takes time and sensitivity and is something I regularly experience when working in offsite situations. Accessing others’ knowledge and experience is a privilege and raises the question of how we use this information. As artists, we can do anything we wish with it, but how does that make those we are working with feel? And how does repeatedly working with the same environments and landscapes avoid duplication of ideas and draining volunteers of their energy? Citing Fiona Wilkie, a writer investigating ideas of site, Watkins suggested ‘it was not a case of retelling the same story but of finding incongruous ways of revealing it.’

Owain Jones, Professor of Environmental Humanities at Bath Spa University spoke next, considering what he believes to be our slow industrial genocide as a result of mass consumerism in the West. He drew our attention to what is invisible to most of us in the environment, the loss of biodiversity over the past 70 years. In citing Guattari’s seminal book, ‘The Three Ecologies’ (1989), he drew our attention to how cultural and psychic ecologies are being lost too as a result. He believed art can question and challenge, that aesthetic and creative approaches are needed to raise awareness and action. The environmental humanities are attempting this but need practitioners to implement these challenges. He believes we need to rethink what humans are and how they live on the planet, that these environmental stories can be told in ways that will enable people to engage. He did not believe conventional politics can address these issues as they are on a global scale, requiring completely different strategies. He noted that Ecuador, one of the poorest countries on the planet, has produced nature rights and rewritten its constitution to reflect this. His talk went on to consider his current research into water as the likely next major cause of global conflict as it comes under increasing pressure. His recent Big Blue Map of Bristol project aimed to raise awareness of water in and under the city.

Jones’ talk made me think about these ‘invisible landscapes’, the things that are being lost from under our noses but also, predominantly out of sight, reminding me of the old saying, ‘out of sight is out of mind’. But I also question if it is art’s role to be instrumentalised for such purposes? Does this simply make art propaganda? And if so, what are the implications for the artists working in this way? Can artists really change the course of politics or do they primarily reflect what is happening? I feel these questions warrant deeper consideration than is possible here and suspect that any discussion would ultimately fall to either side of belief systems ie those that believe art should be used for such purposes and those that don’t.

The final speaker, Sally Labern, Director of the Drawing Shed, described how she set up the project following an experimental work at Tate examining the realities of light poverty for large percentages of the global population. By limiting how long light was available, it drew attention to the limited availability of artificial light in developing countries and the impact this has on health, education and social exchange. The Drawing Shed aims to reflect the lives and aspirations of those who are often invisible in environments, those with limited incomes and social networks. Working from three garages in E17 in London, the project began by asking older residents to describe their earliest memories of play counterposed with their earliest memories of work to create the piece, ‘Echo Chamber’. This drew the community to the project space in an unthreatening way and opened doors to further work with younger residents. She uses this approach to give places back to people who can no longer see them, citing Dave Beech and the Freee Collective’s approach to working in the public arena. While I question the idea of using art instrumentally, I found the Drawing Shed’s approach invigorating. The work was strong in its own right while clearly growing out of a collective and collaborative process.

After a wonderfully hearty lunch in the local pub, we had the opportunity to visit Dawe’s Twineworks in the village. Simon Lee Dicker had established a working relationship with those renovating the works and undertaken a residency there in the preceding months. The works are believed to be the only working 19th Century twine works left in the country and had fallen into serious disrepair before a committed group of enthusiasts set about renovating the building and machinery. OSR projects are hosting a series of residencies at the Twineworks during 2016. Wandering through its open structures and pondering how it would have looked and sounded when it was last operational was a powerful experience and clearly animated all of those on the tour.

We then joined one of the three workshops on offer. I opted for the 60 minute Residency devised and led by artist Alex Stevenson. The other two sessions were led by Jethro Brice and Tim Martin. Brice explored the thinking powers of mud with participants, creating drawings and gestural responses while Martin’s group considered if art is useful or useless, producing a short film, Skitless, essentially, skittles without the skittles, just the balls!

Stevenson’s mini residency was both interesting and challenging. We divided into four sub groups and were presented with detailed instructions, broken down to the minute, of how to conduct ourselves. Needless to say we ignored most of these, selecting only the things that interested us! My group elected to explore the church as the locus for our residency and surprised ourselves both in what we could draw on as a collective and what we discovered in a short space of time. Our final task was to present a mini private view for the other groups. We hastily improvised with a series of found objects, creating a surprisingly memorable installation in the Bell Tower in the church. This intensive, collaborative approach was enlightening and one that could easily be adopted in future situations.

Returning to OSR, we shared what each workshop had done with the whole group before final thanks were shared. It was a thought provoking, enjoyable and well-paced day. I look forward to more from OSR.