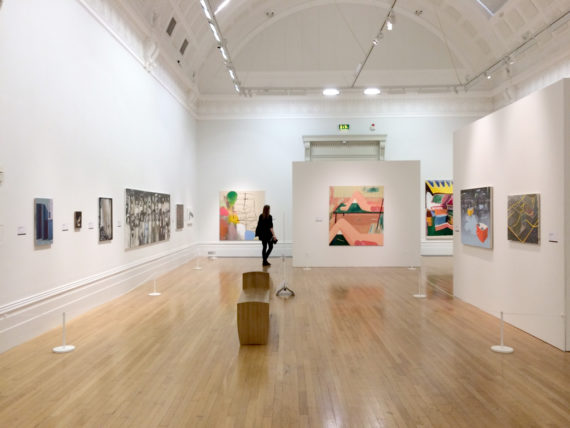 Stepping into the John Moores painting prize from the Walker Gallery permanent collection, it seemed as though the lights were suddenly turned on. The walls are clean, white, geometric. In contrast with the rest of the Walker, the paintings are nearly all unframed, and the lighting brighter. The first painting (to the left, as you enter) is Bernard Charnley’s ‘When the stars threw down their spears’: a swathe of orangey-yellow paint sweeps across an abstracted landscape of red, blue and green. The painting (titled with a Blake quotation) felt a fitting start to the show: abstract expressionism has happened, but the pre-20th century past still has influence.

The first room introduces five propositions in paint. Compared with Charnley’s gestural painting, Gemma Cossey’s and Selma Parlour’s works are tight, precise and controlled. The paintings show steady brushwork (in fact a brush-tipped paint pen for Cossey) and a sparse application of paint, where the ground becomes as important as the marks on it. Nearby, Enzo Marra’s thick, oily impasto roughly depicts an invigilator sitting in a gallery, and beside Marra’s painting a larger work by Duncan Swann shows four figures, roughly outlined over a ground of liquid, running paint (all in monochrome). The room seems to show what paint can do: it can be a paste, a liquid, a line, a colour – and can create forms.

The next room is a large hall, high ceilinged and brightly lit. The majority of works in the prize (and all the largest paintings) are shown in this room, with some free-standing walls in the centre to display smaller works (groupings that share similar concerns / themes). The works are predominantly of paint on rectangular canvas (and a selection of other grounds – paper, card, concrete, foil). Unlike the Jerwood Drawing Prize which favours works that extend the boundaries of drawing (e.g. this year the drawing prize was won by a video piece and in 2014 by a sound piece), or the Marmite Prize for Painting which often includes sculptural / object works, the John Moores prize show appears to feel quite comfortable with the tradition of painting.

Having said that, it’s interesting to note what types of painting the judges have gone for, and what hasn’t made the cut. The selection predominantly favours abstraction (both gestural and geometric). At the far end of the room Karl Bielik’s ‘Sunday’ is a gestural highlight – loose, bright marks on raw canvas create a celebratory piece, free and bold. A similar confidence is shown in the late Ben Cove’s tightly geometric painting ‘Freeloader’ – here acrylic paint is used to build a solid and self-contained logic in the painting, creating illusory depth in the picture plane as well as smooth areas of flat colour. Similar complications of surface and depth are played out in Michael Simpson’s (prizewinning) ‘Squint (19)’. Having only seen this work online before, I was drawn in by the layering of paint and the painting’s odd sense of scale in relation to the viewer (are those faraway steps leading to a small door, or is it just geometry?). The edge of the canvas is painterly – the top layer conceals paint layers that peek out along the perimeter.

I was surprised to see that portraiture doesn’t really feature in the prize this year (it was very much in evidence in the 2014 selection). The closest thing is perhaps Sneh Mehta’s double portrait ‘Him & Her’ – however the faces of both figures are made of gestural lines and layers, with no discernible features. The same is true of virtually all faces in the show: they are usually turned away (Nicholas Middleton and Emma Talbot), cropped or blank (Gabriella Boyd, Ewan Murray, Julia Warr), or vaguely sketched in (Marra and Swann). Perhaps the most figurative work is Steph Goodger’s 3.6m long painting ‘Les Non-Réclamés (The Unclaimed)’, but here the bodies in coffins are largely faceless – blurred in death. I found this shift away from portraiture interesting given that the last three John Moores prizewinning paintings have had faces in them – works by Rose Wylie, Sarah Pickstone and Keith Coventry.

Landscape features in works by Graham Crowley and John Stark, and urban scenes by Nicholas Middleton and Mandy Payne. All of these (relatively small) paintings are clustered together on one of the freestanding walls in the centre. I overheard a gallery visitor to the show stating ‘It’s beyond me’ looking at Michael Simpson’s painting, but then going over to the landscapes and saying ‘these I like’. While all four of these works are clearly the result of a great deal of time and labour, so too are the majority of the abstract works in the show. Nicholas Kulkarni’s painting could be a digital ‘landscape’ seen in perspective – with tiny squares receding in the distance. In the catalogue Kulkarni states that, ‘Even though the checks appear uniform, no mechanical means of reproduction have been used to paint them, a process which makes hours pass by as if they were minutes.’ Time, effort and control all seem to be attributes favoured by this year’s judges. 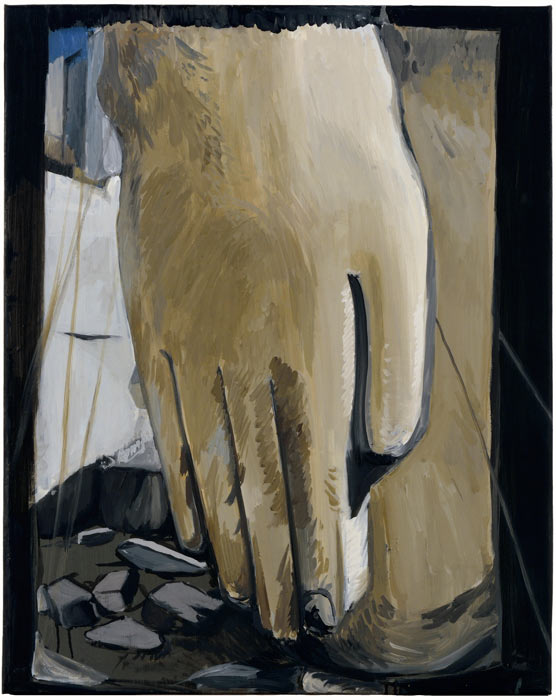 I was intrigued by how few works were derived from photographic source material. Of the five prizewinners, only Talar Aghbashian’s work makes direct reference to photography – the others have their own self-contained (and abstract) logic. In this show there is a definite shift away from what Jordan Kantor in 2004 dubbed the ‘Tuymans effect’ – the widespread influence of features of Luc Tuymans’ style: ‘distinctively crude rendering, his chalky palette and limited chromatic range, his use of photographic and filmic sources and cropping techniques, as well as his particular engagement with historical subject matter.’[1] Similarly, no painting in the show appears to be created by means of photographic projection – at least in a photorealist sense (a process so widespread that in 2005 Jerry Saltz had called for a ‘a 48-month moratorium on the reproduction of photographs with the aid of overhead, opaque or slide projectors in paintings’)[2]. The exhibition seems to state that Tuymans’ and Richter’s (photographic) immense hold over contemporary painting may be loosening.

This could be a growing trend in UK painting – or it could be down to the particular taste of the judges (most likely a combination). Interestingly, the photographic source is evident in the prizewinners of the John Moores Painting Prize China show (also on show at the Walker): Wang Wang’s ‘Corrupted Land’ has the language of a large black-and-white photograph, and Zhang Yang’s ‘Old News’ looks photorealist. The China prizewinners were selected by a different panel of judges: no doubt they would have chosen a different UK show had they selected it.

This show seemed to me a strong statement of where painting in the UK may be at now (echoing trends I’ve seen in the Marmite Prize for Painting and the Turps Art School shows). I would summarise it as painting that has its own interior logic (without the crutch of photography), on the whole doesn’t engage too directly with politics (or questions of identity and representation), and embraces abstraction with a sense of emotional coolness and rationality (as distinct from abstract expressionism). Beyond that it’s very much about the material: the stuff of paint, surface, and the pleasure of playing with it until it looks fixed and ‘right’.