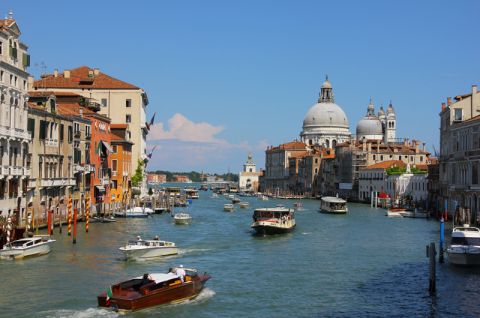 Going to the Venice Biennale is much easier than you might expect. Yes there is an overwhelming amount of art that you can see and at times feel that it is your duty to see, but actually it is all in Venice, which is just such a gorgeous place. The water all round is the perfect antidote and de-stresser if the challenge of ‘doing it all’ becomes too much.

There are reviews and must see lists but really the advice from Nicola Streeten was the most valuable: Take comfy shoes, (even if you are used to walking, you will be on your feet all day and if it is hot you will need comfy shoes even more) and buy a 3 or 5 day travel pass as getting on Vaporettos (water buses) will speed things up a lot.

Also my own top tip; buy a decent map in the UK before you leave home. You can try and rely on a Google maps app but believe me, belt and braces is the way to go.

Things don’t need to be expensive; stay somewhere where you can do some of your own cooking. This means that you will have spare money for the necessities like drinks and ice creams.

The 25 Euro Biennale entrance ticket covers entrance to the Giardini and the Arsenale. You will definitely need a day for each of these venues and even then it is impossible to see it all. We ended our day at the Giardini with only 7 minutes left to literally run into and glance at the final three pavilions. But then when these venues close at 6pm you can just sit and relax and soak up the atmosphere, drink wine by a canal and watch the gondolas go by.

There is so much clever art, making intelligent statements but wow can it make you yawn a lot! So, what an absolute delight to come across Peter Fischli and David Weiss’s large scale collaborative piece, Suddenly This Overview (1981-2012). Every little scene (all made in unfired clay) was a winner. ‘Albert Einstein’s parents in postcoital repose, having just conceived their genius son’, ‘Home from work’ and ‘Small, medium and large potatoes’ are just three of my favourites.

I really enjoyed being in the midst of art that makes us see the world in a new and less egocentric way.

In the words of the guidebook, “From the start of their collaborative practice Fischli and Weiss’s work has been marked by a playful disregard of all things high-minded. Instead they valourised the childish, the banal, and the wondrous- often to poignant effect.” and it concludes that, “Suddenly this Overview, Fischli and Weiss’s idiosyncratic anthology, celebrates the world in all its ungraspable variety and profusion.”

After our day in the Arsenale I was feeling quite overwhelmed and in need of an artistic pick-me-up so we returned to experience Bedwyr Williams’ ‘Starry Messenger’ for a second time. (There is lots more art outside of the Arsenale and Giardini; various collateral events are scattered all over the city and Bedwyr Williams, representing Wales, is just one of them).

Starry Messenger is an installation and video piece which defies description; starting off celebrating shed-man in the form of amateur astronomers and culminating in a fantastical surreal film which has various tangents and a narrative with no obvious beginning nor end. A film where there is a fluffy cat up on a table licking perfect period gelatine-stiffened Seventies party food (complete with garish piped decoration) which is very up-my-street. And then throw in some bondage costumes, fake leather and Bedwyr’s deadpan voiceover and I’m in love!

I really enjoy immersive experiences and the piece presented by Israel was another outstanding piece of art. The pavilions in the Giardini are a whole range of interesting architectural spaces in themselves and Israel’s pavillion was built in 1952 (Zeev Rechter) was a surprisingly modern building and also a very interesting space.

Open plan and on three levels you might think it a challenging space to fill with artworks which include physical works, film and in particular sound but what artist Gilad Ratman has achieved for this 55th Venice Biennale is a perfect combination. And the experience doesn’t rely on being explained with text as it reveals itself as you spend more time with it.

‘The Workshop’ by Gilad Ratman is a multi channel site specific installation which plays with time sequences and references utopian pre-lingual communities.

Pre-lingual is a concept that I am interested in personally as I prefer to listen to music with lyrics in imaginary or foreign languages. In my own art practice I often draw on memories and emotions from my own very early years, from a time before I had the necessary vocabulary to express myself; from a time before words.

In ‘The Workshop’ Ratman uses the primal groans, moans and generally very strange noises uttered by the workshop participants (these were recorded while they modeled their own clay busts). He then worked with a DJ who remixed these sounds into something which sounds completely articulate in a musical sense. It is an artwork that you want to spend time with and walk up and down the various levels of the pavilion more than once.

The curated exhibition of the biennale is The Encyclopedic Palace named after the fantastical museum that Marino Auriti a garage owner and amateur artist designed and proposed building in the 1950’s. His architecture model of this crazily ambitious museum (to hold all of humanity’s achievements) is at the centre of the Encyclopedic Palace exhibition.

The Encyclopedic Palace exhibition is across both the Giardini and Arsenale sites and there is so so much to see but if you stay relaxed about it you will be wonderfully surprised. Yes you will definitely miss things but you won’t be disappointed as you can’t help but come across plenty that intrigues and interests you.

Ron Nagle’s small ceramic sculptures which make up Sleep Study were perfectly placed alongside a selection of Tantric paintings from Rajasthan. The catalogue says, “He models them from drawings that he makes almost every night before bed, usually while watching old Charlie Chan movies. In his state of distraction Nagle has observed that the images pop into my head almost like visions.”

These works are intriguing and they feel both personal and universal at the same time. This is something which I aspire to in my own work so they very definitely resonated with me.

Visiting the 55th Venice Biennale is the perfect combination of holiday and art. I would highly recommend it.

Materials, space, architecture and narrative; I weave them together. My work has been described as having a disarming sense of playfulness and humour.