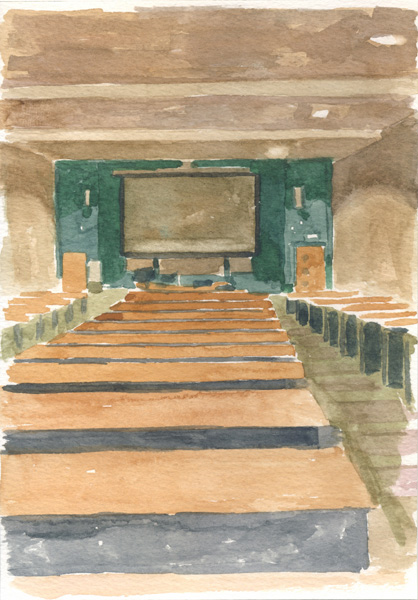 Push-ups of the artist

Why the hell would anyone want to draw a building or, in fact, a university campus building? Well…maybe you wouldn’t want to but Ally Wallace does. For six months he made twice-weekly visits to University of Stirling, to study the Pathfoot Building. His method of choice in terms of studying is a sketchpad, a brush pen and water colours. Looking at the series of drawings that came of it, you’ll discover details of the building, its architecture, its interiors, its surrounding landscape, even its art collection (there are drawings by Ally of sculptures by Barbara Hepworth, Mary Martin and Eduardo Paolozzi). 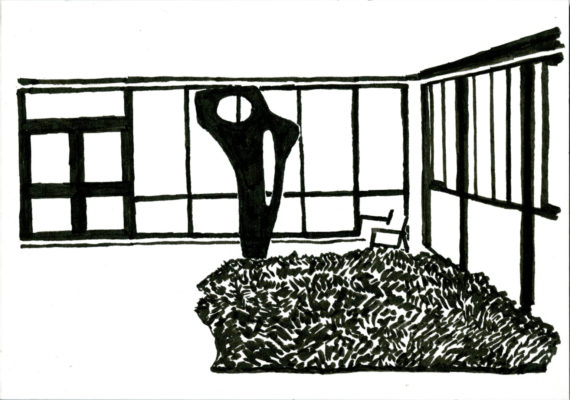 Technically speaking, if you were to assemble all the drawings into one big collage you would get a pretty good idea of the building and its characteristics, even without seeing it. Yet it is still a highly subjective approach. Compared to photos which generally offer a neutral view, including all the information that will fit the camera lens, Ally’s drawings zoom in on certain aspects, excluding other parts by leaving blank areas on the paper. The viewer gets to follow the artist’s gaze. In each drawing we only see what caught Ally’s interest, not knowing what he left out. Unless of course we take the drawings back to the original site and put them back into context (which you can do successfully. I’ve tried it before when Ally drew Bonnington Hydro-electric Power Station).

In a way the purpose of these drawings is to render the artist’s interest. They communicate his interest in a particular building and Ally has used a similar approach many times before. He goes out to investigate, taking in a specific building like a power station or a university campus, sketching it, sometimes filming it, talking to the people involved with it and then he will report back with the help of drawings sometimes published collectively in a book. It is also a classic way of training the artist eye, building some visual muscle.

At the same time, these drawings may be seen as a starting point for something bigger. They may evolve into larger works of art – linocuts, prints on fabric, even reliefs or mobiles – when the artist returns to the studio. This is a turning point, of course. Originally the project had started out as an exercise, a training of the eye and an understanding of one’s personal interests that became a body of drawings legitimated by truthful observation. Now it may take on an afterlife in the studio. Future works from the studio may relate less obviously to the original observations of the university building as captured in the drawings. 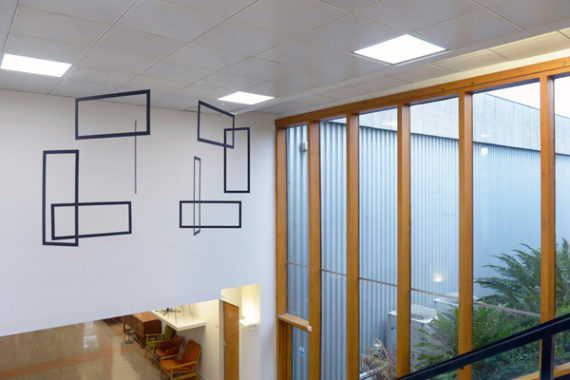 The artist is taking liberties. This is what it’s all about. You need confidence to pull this off, to make art. What you don’t need is legitimacy. No one shall need to justify inspiration. Whatever the art may look like, whatever the artist comes up with, in this case alpha is drawn from a brilliant piece of British architecture so I’m pretty sure that its omega will neither be born out of madness nor vanity so I shall look forward to seeing new works form the studio of Ally Wallace any time soon.

Cornelius Quabeck is an artist based in Düsseldorf.